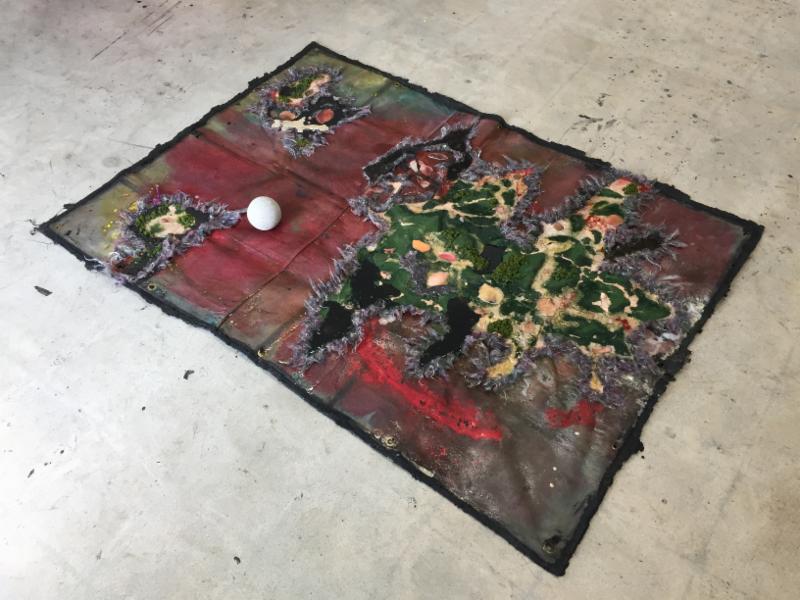 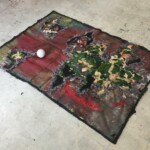 James Crosby’s newest works start from his recreation of “gum blankets”, rubberized ground covers carried by Union troops during the Civil War. Soldiers slept on these blankets for insulation from the ground; they carried their personal belongings in them; cut out holes to fashion makeshift waterproof ponchos, and even painted checkerboard patterns on them to play board games. The gum blanket as a historical object is the site or resting place of a single body fighting for many and thus, as an art object, plays with scale; the intimate and the epic, the individual and totality.

The blankets’ rubber undercoating continues Crosby’s experimentation with what has become a signature material. Rubber’s elasticity and memory allows it to maintain, alter, and rebound to form. In these works, this memory is both material and historical, with rubber telling a longer story of colonialism, slave labor, and global histories of war capitalism. By applying his rubberized material to the gum blankets, Crosby entangles discourses of freedom and struggle, exploitation and liberation, as a substrate for the production of art itself. The blankets come into direct contact with the gallery floor through their underpinning, a layer of blackness that reiterates their essential function: to insulate, provide protection, enable survival. The embattled nature of the material upon which the work rests is largely hidden from sight but for the raw edges, hinting at a realm of buried meaning.

As occluded rubber forms the base, the top-layer of these works begins as a patchwork of drop cloths – a material derived from, and referencing, studio practice. The drop cloths have been pigmented with snap-line chalk, traditionally used to reticulate boundaries for building sites. Crosby diffuses this intended delineation, scattering the chalk and staining the drop cloth with expressionistic color fields, creating a surface that pulses with color, line, and depth. Physical substances and conceptual meanings blur in a process of improvised lamination, as the artist pours and layers construction, hobby and art prop materials. A topography of gradual accumulation, the gum blankets’ surfaces evidence a process, an object taking form over time and becoming a site, rather than a formed thing.

Crosby effects vast shifts of scale – from microorganism to landscape, the cosmic to the cellular. Tidepools of resin and pigment are bordered by cell walls of psychedelic fibers, the deconstructed strands of “disaster blankets”. These felt-like coverings are designed to provide temporary and cheap protection after a natural disaster, but they also find a more permanent use in homeless encampments. The leading producer of these blankets, and the specific ones used by the artist, is UNICOR, a prison labor company, pulling in the tactical evolution of racialized involuntary servitude, from slavery to mass incarceration. By plucking and pulling apart the compressed assembly of recycled fibers by hand, Crosby reverses their production, returning them to raw material.

The fibrous borders of these cell walls – calling to mind both biological cells and prison cells – enclose resin puddles pigmented with “SO-Strong Fleshtone”. These peach swamps threaten to overflow, colonize, invade and consume, constructing inside and outside spaces in relation to themselves. The artist reaffirms the manufacturer’s racism utilizing “SO-Strong Fleshtone” as a visual shorthand for whiteness as both geopolitics and art medium. One could view Crosby’s swamps of pigmented resin as material expressions of consumed landscapes, making reference to hobbyists’ scale models of battlefields and Civil War reenactments as medium and site; unnerving nostalgia and contrived situations of control that Crosby repurposes to collide racially-charged symbols of craft and hierarchy.

The final element of each work is a concrete sphere that makes direct reference to David Hammon’s “Bliz-aard Ball Sale”, an homage that both re-performs and reverses aspects of the original action. Shaped in Hammon’s hands, the snowballs’ unforming becomes a site-specific performance of whiteness melting. Crosby instead uses rapid set cement but extends its natural working time: through the continuous labor of handling and forming, it solidifies into a site again cast from the artist’s hand. Situated within a terrain of embodied sculpture and performance, Crosby initiates an intertextual exchange, questioning how material – physical and conceptual – renders agency; how it can be made workable and malleable, ephemeral or permanent.

James Crosby was born in Peekskill, NY and lives in Los Angeles, CA. Crosby followed his graduation from UCLA’s MFA program in May 2016 with a highly-acclaimed New York solo debut later the same year. He has exhibited widely since. This is his third solo exhibition with Team.