Jeron Braxton – You Can 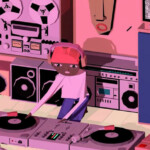 Thierry Goldberg Gallery is pleased to present “You Can,” the first New York solo exhibition of video artist Jeron Braxton.

Braxton’s mesmerizing animations often evoke the notion of a long internet browsing session, where one idea gives way to another. The exhibition includes three animations, where a complex psychedelic sphere of ever-changing imagery unfolds into non-linear narratives, full of biting political and cultural commentary.

In “Octane,” one of the three videos included in the show, Braxton utilizes tactile interventions such as glitch and visual noise to create various disturbances. A street race through hell and back parallels the black experience in America, where the player’s parameters are limited and certain access is denied. A gas station sign that reads “Hell” (instead of “Shell”) serves as a visual signifier to the absurdities of consumer culture and in turn nods to Braxton’s concept of “the modern commodification of black bodies.”

Braxton embraces the visual noise ever so present in our daily lives. A self-taught animator and a musician, he brilliantly utilizes the language of video game culture to tackle issues such as mass incarceration, gun violence and the exploitation of natural resources.

Jeron Braxton (b. 1994, Cleveland, OH) currently lives and works in New York. His films were previously exhibited or screened at the Museum of the African Diaspora, San Francisco, CA; Bronx Art Space, Bronx, NY; and the Museum of Contemporary Photography, Chicago, IL. Braxton’s animations were featured as an official selection at the SXSW film festival and at the Sundance Film Festival where he won the Short Film Jury Award for his piece “Glucose” in 2018.