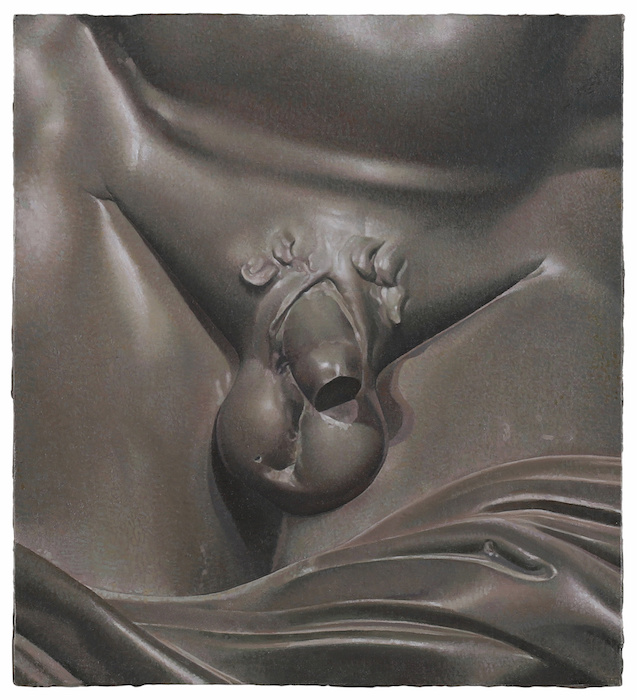 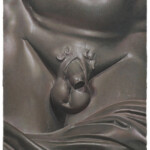 P·P·O·W is pleased to present “RUINS”, Joe Houston’s first solo exhibition with the gallery since 1993. “RUINS” features his latest body of work centered on the damaged genitalia of ancient Greek and Roman statuaries as displayed in museums throughout Europe and North America. In Houston’s intimate paintings, isolated acts of iconoclasm are emblematic of the body as a perennial site of religious, political, and societal contestation.

Rendered with virtuosity in oil on linen, Houston’s emasculated icons examine the persecution and presentation of male desire, while also addressing the veneration and censure of art and artifacts across time and cultures. As per a 16th century edict from the Vatican, most of the statues Houston references were castrated to accommodate fig leaves, which have since been removed. By distorting the conventional perspective on these statues, yet still rendering them true to scale, Houston focuses our gaze squarely on their mutilation.

Once plainly acknowledged, the damaged genitals, whether fractured intentionally or not, beget more questions than answers. Though their losses remain a blind spot in academic scholarship, conservation studies, and curatorial interpretation, castrated male archetypes persist as the dominant convention within halls of antiquities. In “RUINS”, Houston questions this erasure and confronts the power of denial in dictating our visual landscape.

Since first exhibiting with P·P·O·W in 1984, Joe Houston (b. 1962) has distilled timely environmental and social concerns into modestly scaled paintings of commonplace objects and gestures. “RUINS”, however, represents his first examination of a subject within an extended series. Initially approached in paintings and drawings in the 1990s, Houston’s fascination with persistent censorship and its disturbing remnants culminates in these paintings, which he began in 2018.

Houston pursued undergraduate studies at the School of the Art Institute of Chicago and earned his MFA from Northwestern University’s Department of Art Theory & Practice. His honors include an Illinois Arts Council Fellowship, a Pollock-Krasner Foundation Grant, and residencies at Yaddo, MacDowell and the Bemis Foundation. Houston’s work is in numerous public collections including the Allen Memorial Arts Museum, MIT List Visual Arts Center, Progressive Collection, RISD Museum, Vehbi Koç Foundation, and Yale University Art Gallery. He has presented two solo exhibitions with P·P·O·W in 1986 and 1993. He lives and works in Kansas.

Gallery hours Tues-Sat 10 am – 6 pm and by appointment