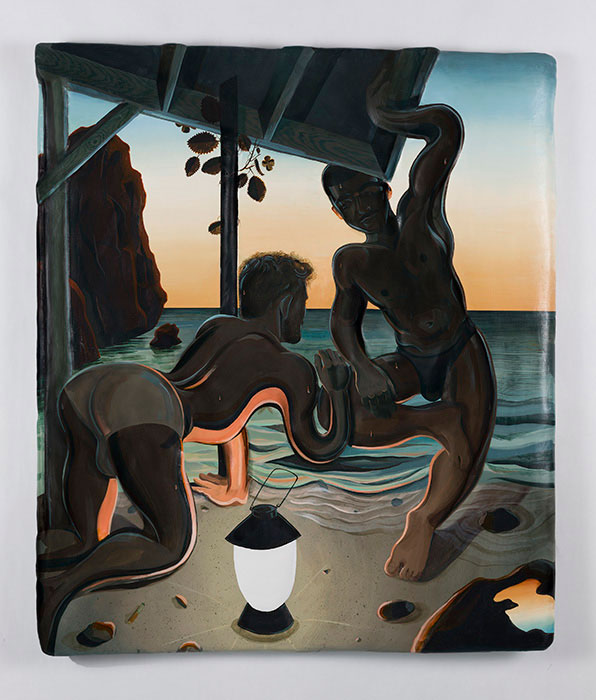 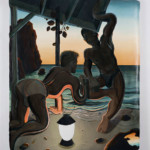 Kyle Vu-Dunn’s relief paintings defy categorical restraints, blurring the lines between sculpture and painting. Employing the idea that a painting does not have to be flat, Vu-Dunn carves sculptural elements into what otherwise would appear to be a two-dimensional surface. Warm tones pulsate off of the artist’s work, a quality he utilizes to heighten the sensuality and emotion of his scenes. Vu-Dunn’s works can be read both as allegorical tales and as experiences the artist himself has encountered living as a queer man. He uses his work to celebrate an often-repressed male sensuality and create a world where men are allowed to display soft emotion.

In “Always”, Vu-Dunn presents a new body of work that plays with tongue-in-cheek subject matter. By making use of comical elements, Vu-Dunn softens the narrative and gives viewers more access into the worlds he creates. He incorporates specific shared activities such as cooking or playing instruments into his decadent backdrops to ground the characters in recognizable actions. Vu-Dunn also pushes the level of sexuality present in the paintings, fashioning scenes with more raw eroticism than his past work.

Moving out of the private, domestic sphere in which his scenes are often set, in “Always”, Vu-Dunn paints men on a beach and in a gay club, among other settings. Despite the public spaces they inhabit, the moments between the characters remain personal and secluded.

Vu-Dunn intentionally depicts ambiguous scenarios, giving the viewer clues but not answers as to what is taking place before them. Backgrounds of landscapes and ostensibly outdoor spaces transform into interiors upon closer observation of an intentional detail, such as a light fixture or piece of furniture. There is a hard edge between each pictorial plane; the figures are bound in their given spaces, yet do not feel confined in their bodies.

Breaking free from any singular tradition of painting, Vu-Dunn creates a style entirely his own. He disregards a sole representational technique, instead embracing various modes of depiction on the same plane. Inspired by interior design photography and film, Vu-Dunn’s source material most often comes from outside of painting itself. His works present a visual excess; they are rich with layers of imagery and signifiers waiting to be unpacked.