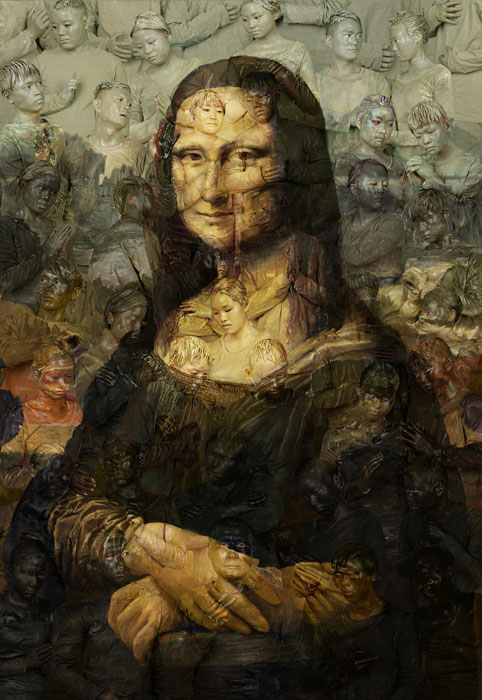 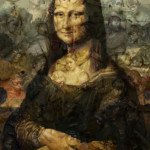 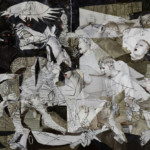 The exhibition marks Liu Bolin’s shift towards the virtual world, exploring this new territory artistically through Post-Internet Art. This new body of work consists of appropriations of classical Masterpieces — da Vinci’s Mona Lisa, Picasso’s Guernica — juxtaposed with a photograph of the devastating impact of the Tianjin explosions. Using complicated and precise hand-painted camouflage, Liu Bolin painstakingly recreates these images with scores of human subjects as his canvas. Through various methods, Liu Bolin’s new photographs have replaced the three subjects on numerous websites, which were targeted with image-search results on Google and Baidu, thus realizing the Hacker project. Neon installations of the URLs exhibited throughout the gallery pound home the transitory and delicate nature of the internet.

Recreating the imagery of human suffering and devastation of war symbolized in the painting Guernica, Liu Bolin’s relives the history of the Spanish civil war, making a plea for humanity and freedom. In Mona Lisa (2016), Liu Bolin imbeds himself into the masterpiece as well as its historical legacy. Touching upon the fact that the work was stolen from the Louvre more than 100 years ago, Liu Bolin aims to reenact the “disappearing and reappearing” of the work through techniques behind the network. Provocatively challenging the viewer to question what is above and beneath the surface, the work intends to reflect upon the complex relationship between the past and the present, the reality and the illusion, as well as individuality and history.

Not only utilizing and analyzing the impact of the Internet, Liu Bolin also delves into other aspects in digital realm, blurring the boundary between art and technology evident in his installation Livestream Vest (2016). Attaching multiple smartphones onto a life jacket, the artist turns on the front cameras for unstoppable live-streaming. Reflecting and broadcasting what is happening while moving around, Liu Bolin merges into the environment mirrored on the vest. The work, therefore, becomes a quasi-invisible jacket wherein the artist turns into part of the social environment.

Employing physical and hyperlinked images, the exhibition explores the theme of illusionism. Actively “disappearing and reappearing,” Liu Bolin issues an urgency through his works. Engaging with both online and offline formats, the artist foregrounds the man-made, the fabricated, and the deceptive, through which he probes into the mass production and circulation of information, and also questions where the power lies in today’s ubiquitous networking.