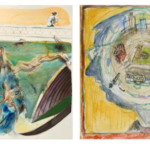 Luci Eyers’ watercolour images have featured in several previous exhibitions at Transition Gallery; for this new show she has invited the painter Timothy Hyman to join her, following Transition Two’s manifesto to exhibit ‘two artists in dialogue, collaboration or opposition’. They plan to give one wall to a collaborative drawing, improvised together over late August. Both artists are interested in creating complex microcosms, looking to medieval manuscripts and wall-paintings for an imagery of compartments and margins. Eyers sees other affinities: ‘a personal narrative, compression of space, an encyclopaedic cramming, peripheral vision…’ But the divergences – of scale and handling and figure-types – are also glaring. Both are in some degree Painters of the everyday, of ‘Modern Life’, yet Timothy Hyman’s imagery partly comes out of street-drawing, while Eyers tends to avoid the directly observational. Both have made small folding books of emblems, which will be shown alongside the larger works, but whose mood and implicit meaning is utterly different. As it happens, they’ve each lived for decades in adjacent North London squares, and that location will provide some of the material for their wall-drawing.

Luci Eyers left the Slade School in the mid 1980s with the Henriques Scholarship. Until the mid 90s she painted and exhibited in London. At this point she veered off to work and teach in the media arts and spent the latter part of the 90s making magazines and new media projects under the umbrella of the collectives “everything Magazine” and “low-fi”. This period included residencies and performances at the ICA, and Baltic, Newcastle and funding from Arts Council England to commission new work by artists using technology. In 2006 Eyers co-curated a London wide media arts festival called “Node.London”. In 2008 Eyers resumed persistent drawing and spent 2012-13 as part of the inaugural year of the Turps Studio postgraduate painting programme.

Timothy Hyman trained as a painter at The Slade and was elected a Royal Academician in 2011. As well as nine London solo shows, he has exhibited widely, and his work is in many public collections, including British Museum, Arts Council, British Council, Government Art Collection, Contemporary Art Society and Los Angeles County Museum. He began to write on painting in the late 1970s, mainly in “London Magazine” and “Artscribe” and later in TLS. In 1979-80 he curated the controversial touring exhibition “Narrative Paintings” (ICA, London, and elsewhere). In 1998 Thames and Hudson published his monograph on “Bonnard” and in 2003, “Sienese Painting”. He co-curated the Tate’s Stanley Spencer retrospective in 2001, and in 2007-8 the major exhibition “British Vision” at the Museum of Fine Arts in Ghent. In 1980 he began a long association as a visiting professor in Baroda, India – publishing a pioneering monograph on Bhupen Khakhar. In 2012 he completed a residency for Maggie’s Cancer Caring Centres (exhibited Royal Academy 2015). His magnum opus, “The World New Made”, was recently published by Thames & Hudson.