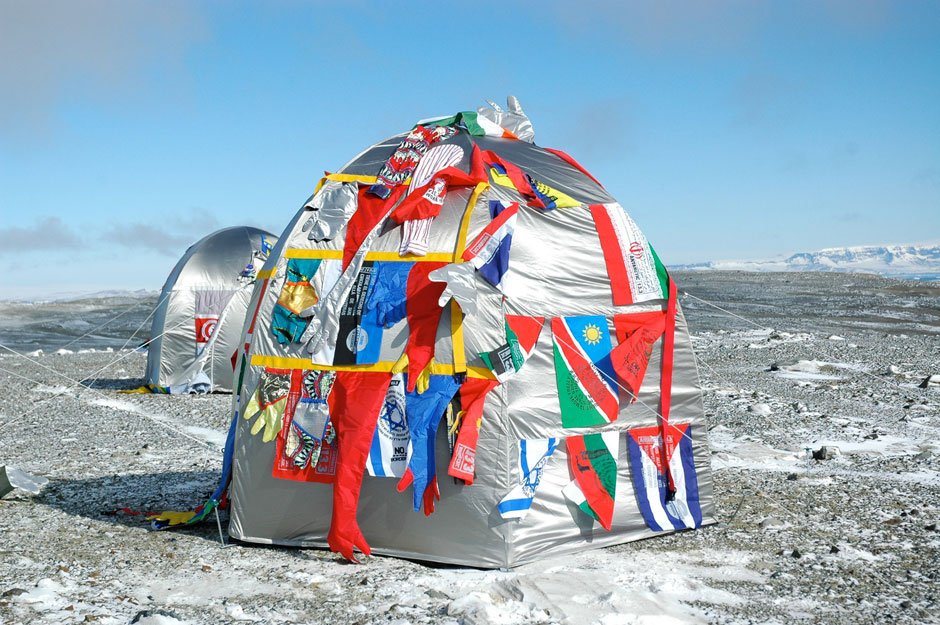 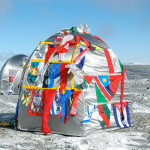 Jane Lombard Gallery is pleased to present “Antarctica”, the first exhibition in New York by internationally renowned artists, Lucy + Jorge Orta. The exhibition is based on the Orta’s groundbreaking expedition to Antarctica in 2007.

“Antarctica” will feature works first created for the artists’ expedition to the Antarctic peninsula, addressing issues such as environmental conditions and human survival in adverse situations. Following a commission from “The End of the World Biennale” (2007), the Ortas installed an ephemeral “Antarctic Village” on the continent, a “village” composed of 50 domelike sculptures constructed with flags from countries around the world. They also created and raised the first “Antarctic Flag”, to symbolize the unification of nations around shared common values.

Antarctica embodies utopia: a continent whose extreme climate encourages mutual aid and solidarity, freedom of research, sharing, and collaboration for the good of the planet. The 1959 Antarctic Treaty, which now counts 53 nation states, instituted the continent as common peaceful territory. The Madrid Protocol, ratified in 1991, has frozen mining until 2048 and banned industrial research or exploitation for fifty years.

The centerpiece of the exhibition is “The Antarctic World Passport Delivery Bureau”, a travelling installation recently presented at the Nansen Initiative Global Consultation in Geneva and at the Grand Palais in Paris during the COP21 UN Climate Summit. Visitors to the “Antarctica World Passport Delivery Bureau”, an architectural assemblage made from reclaimed materials, receive a uniquely numbered “Antarctica World Passport”, and in exchange pledge to support the project’s principles: to take action against the disastrous effects of global warming and strive for peace. Since 2008, 55,000 passports have been printed, and visitors to Lucy + Jorge Orta’s exhibition at the Jane Lombard Gallery will be invited to register for their personalized passport edition, and to join this growing community of world citizens.

The studios of Lucy Orta (b. Sutton Coldfield, UK, 1966) and Jorge Orta (b. Rosario, Argentina, 1953) are located in central Paris and at Les Moulins, a cultural complex founded by the artists along an 5-mile stretch of the Grand Morin Valley in Seine-et-Marne. Amongst their most emblematic series are: “Refuge Wear / Body Architecture”: portable minimum habitats bridging architecture and dress; “HortiRecycling / 70 x 7 The Meal”: the local and global food chain and the ritual of community dining; “Nexus Architecture”: alternative modes of establishing the social link; “OrtaWater / Clouds”: water scarcity and the problems arising from pollution and corporate control; and “Amazonia”: the value of the natural environment to our daily lives and to our survival. Their artwork has been the focus of important survey exhibitions, including: The Curve, Barbican Art Gallery, London (2005); Fondazione Bevilacqua La Masa, Venice Biennale (2005); Museum Boijmans Van Beuningen, Rotterdam (2006); Biennial of the End of the World, Ushuaia, Antarctic Peninsula (2007); Hangar Bicocca spazio d’arte, Milan (2008); Natural History Museum, London (2010); MAXXI National Museum of XXI Century Arts, Rome and Shanghai Biennale (2012); Yorkshire Sculpture Park (2013); Herbert F. Johnson Museum of Art, Ithaca and Parc de la Villette, Paris (2014); London Museum Ontario (2015).