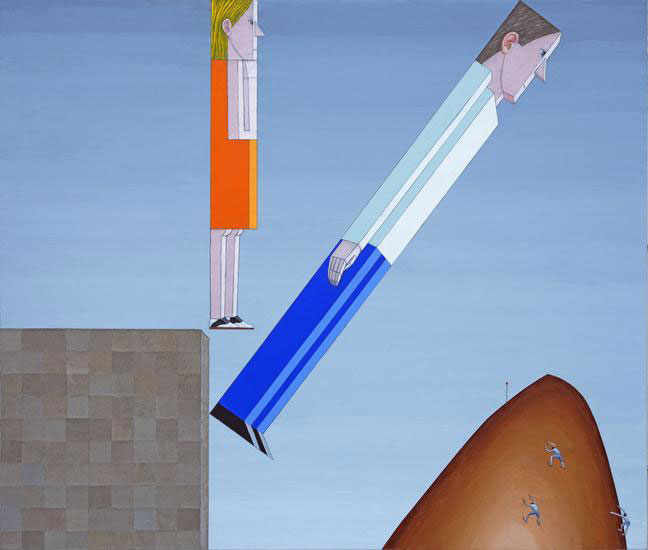 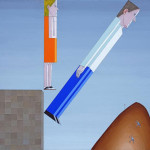 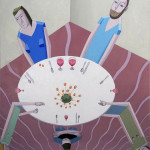 James Cohan is pleased to present “Things People Do”, the gallery’s first solo exhibition of work by Mernet Larsen.

Mernet Larsen’s paintings are simultaneously rooted in and distant from reality. Taking inspiration from the geometric abstractions of El Lissitzky and the narrative stylization of twelfth-century Japanese and early Renaissance paintings, Larsen’s vertiginous spaces often rendered in reverse perspective, and hard edged figures offer familiar versions of reality that are analogous and parallel to our own. Developed over the last 40 years, Larsen’s independent and meticulous approach to narrative painting “reaches toward, not from, life.”

In the early 2000s, Larsen came to a crucial turning point in her work: “I decided that I wanted to paint old-fashioned narrative paintings with volume and depth and the essences of significant actions. I developed a longing for pictures evoking a classical sense of permanence and solidity in the spirit of fifteenth-century Italian painting. But I knew these paintings would be statements of longing, of recognition that essences must be constructed, not uncovered. They would have to be makeshift contraptions, taking into consideration the issues I had been dealing with for the previous 40 years.”

“Things People Do” presents a selection of new and recent paintings that demonstrate two of Larsens distinct approaches: reverse perspective and what she refers to as “rorschaching.” In “Alphie” (2015), one in a series of paintings whose subjects are rendered in reverse perspective, the background looms impossibly large while the foreground paradoxically shrinks. In another work, “Misstep” (2015), Larsen devises an improbable narrative of two figures teetering off the edge of a building. Here, the geometrical characters evolved through this “rorschaching” process of imaginatively constructing figures from the abstract lines of El Lissitzky’s compositions. Larsen uses these two approaches as catalysts to develop highly idiosyncratic and narrative worlds that stretch beyond the seemingly static categories of “figurative” and “abstract.”

Mernet Larsen has recently been the subject of solo exhibitions at Various Small Fires, Los Angeles (2015), and Johannes Vogt, New York (2012). In 2016, Larsen was selected to be included in Phaidon Press’s forthcoming edition of the “Vitamin P: New Perspectives in Painting” series, to be published this fall. Reviews of her work have also appeared in Mousse Magazine, ArtForum, The New York Times, Hyperallergic, ArtReview, and The LA Times. Additionally, her work is housed in many significant collections, including The Walker Art Center, Minneapolis, MN., Los Angeles County Museum of Art, CA., Zabludowitz Collection, London, Levy Collection, Paris, Ringling Museum of Art, FL, Museum of Fine Arts, St. Petersburg, FL, and the Tampa Museum of Art, FL. Since the late 1970s, Larsen has exhibited extensively in Florida, having over 30 solo exhibitions, including career retrospectives at the DeLand Museum of Art, Florida (1992), and the Morean Art Center, St. Petersburg, Florida (2010). In addition, Larsen has been part of over 70 group shows including Sadie Coles HQ and White Cube in London, the National Museum of Women in the Arts in Washington D.C., and the American Academy of Arts and Letters, Regina Rex, the New York Studio School Gallery and Lisa Cooley in New York City.

Larsen (b. 1940 Houghton, Michigan) received her BFA from the University of Florida, and her MFA from Indiana University, and lives and works between Tampa, Florida and Jackson Heights, New York.