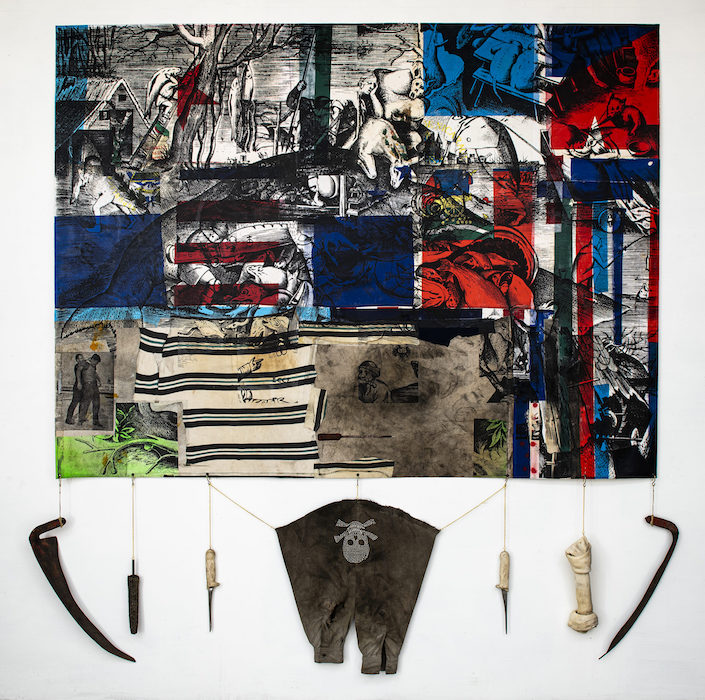 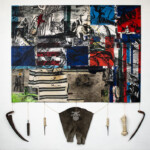 We are pleased to present new works by Moris, marking his first solo exhibition with the gallery.

Moris grew up and continues to live and work in a Cartel-run area outside Mexico City. His work addresses representation, social and subjective agency, urban issues, and marginal cultures often taken for granted in mainstream society. The issues Moris researches are an intrinsic part of his daily life; the street and social space are his laboratory. Understanding the diverse social codes of the urban underclass and underworld, their strategies for survival, and informal use of aesthetics in order to make daily life more humane and dignified are the driving ethos for his work.

For his inaugural exhibition with Marc Straus, the artist has created new works in his signature collage on canvas style, often incorporating found objects from the streets surrounding his studio. When discussing his incorporation of these elements Moris explained, “Each object in this series represents an individual or a specific part of society; it is the new social order invented by the poorest, those forgotten …” In “Carne sin huesos (Meat without bones)” each hanging element is a symbol: the girdle belt represents the power of an individual, the boxing gloves suggest the way you earn respect in the streets, and the saw embodies savagery of this way of life.

His recent work echoes the phenomenology of the migrant, the survival tools in the countries on the long journey north to the United States. Moris’ work proposes a dialogue with present agents in this equation, but most of all, he hopes to propel these circumstances through our cultural platform to an audience that is often unaware of the underpinnings of these issues. There are not easy solutions, but it is critical to call attention to the urgency of the situation.

In “Perroscoludos II” Moris quotes a scene from Dante’s “Inferno”. This collage is part of a series created by cataloguing the criminals that appeared on the covers of tabloid newspapers in Mexico, an exercise Moris realized was analogous to Dante Alighieri describing the inhabitants of the circles of hell.