Richard Finkelstein – Sitting in the Dark with Strangers 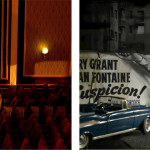 The lights begin to dim, ambient noises fade away, suddenly there is a burst of light overhead and you are transported… this is the premise of Richard Finkelstein’s newest body of work: “Sitting in the Dark with Strangers”. In this latest series Finkelstein uses miniature figurines and meticulously fabricated sets to compose his images and explore the experience of the movies.

Movies open a window into the world of our fantasies, melding what we see with what we desire, what we fear and what we hate. In Finkelstein’s photographs we enter into this world, sitting in the darkness as characters and as dreamers, then pull back as only observers. While the movie ends and the usher comes with his broom to sweep up the sodas and popcorn, while the posters are torn down and discarded, the images continue to live on inside us.

Finkelstein’s works find inspiration in painting and film. In “The Man Who Wasn’t There” the linear breaks and stark lighting are reminiscent of works by Edward Hopper, while Alfred Hitchcock films inspire intrigue from the film “Suspicion” in the image “Beware, My Lovely”. Not only is the film directly referenced in the movie posters that fill the wall, but also in the action of the man watching the woman – the sinister words on the poster link them: A story of love… under the threat of MURDER! Through his work, Finkelstein not only comments on how movies impact our emotions, but how like a dream, a film allows a viewer to give up the appearance of reality to that which is unreal.

“Sitting in the Dark with Strangers” is Richard Finkelstein’s second exhibition with the gallery. After a successful career as a trial lawyer Finkelstein has turned to creating art. His photographs, paintings and drawings have been shown in various venues. Finkelstein was born in Philadelphia in 1950 and lives and works in New York City.