Robert Hodge – Rhythm for the Suffering 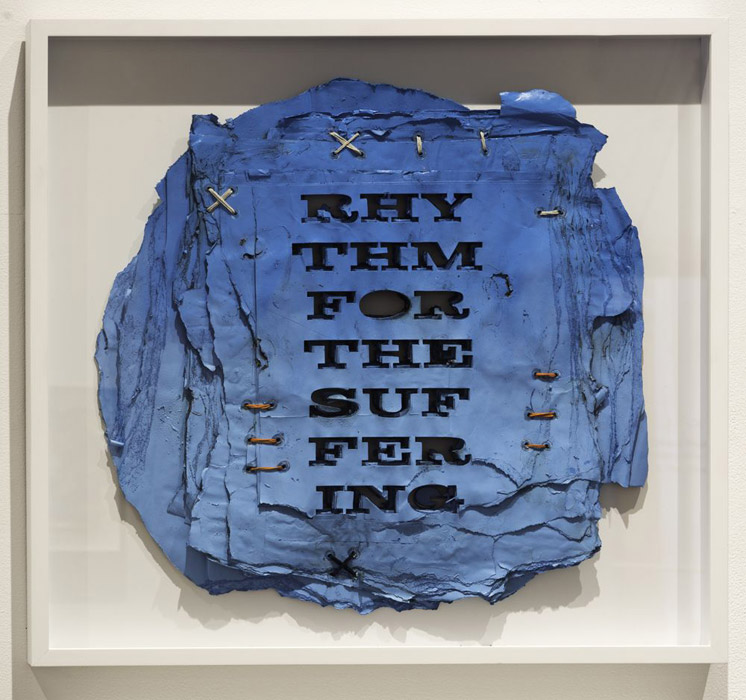 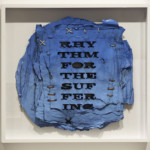 Freight + Volume is very excited to announce Robert Hodge’s first major solo exhibition in NYC, “Rhythm for the Suffering”. Following a two-month residency at San Antonio’s Artpace, as well as a winter project at Arts+Leisure, the artist presents a new body of allusive multi-media work, probing themes of cultural identity and resilience within a framework of dynamically layered narratives and source materials.

Robert Hodge’s work is immediately recognizable by its intense, self-assured materiality. Assembled from a wide range of found and reclaimed materials, the work’s heavily textured surfaces are immediately enticing, and their distinct tactility beckons the viewer to engage. Relating his practice to Robert Rauschenberg’s desire to work in the “gap” between art and life, Hodge pairs urban detritus with symbols and pronouncements drawn from a rich cultural tradition, forming a nuanced duality wherein fragments of everyday urban life become conduits of artistic expression. He embraces chance and the possibilities suggested by his materials, engendering a dynamic push and pull between his own creative voice and the urban debris that he integrates into his work.

Two of the pieces in the exhibition, “Rhythm for the Suffering” and “Blessings on Blessings on Blessings”, consist of thickly matted paper cut out with text, which the artist embellishes with paint and stitch-work with colored thread. Built up from countless layers of found newsprint, posters, and other ephemera, they take on a solidity that resembles a surrogate wall marked with graffiti, with the fragile individual pieces of paper subsumed into a concrete whole. “Behold a Lady” has a similarly weathered appearance; tar paper is given the look of oxidized metal, a striking counterpoint to the contemporary appearance of the cut-out text’s font. Though the surfaces of these paper assemblages recall everyday urban dereliction, they possess a certain memorial-like quality – an understated yet dignified monumentality. As in much of Hodge’s work, the suggestive materiality of his practice evokes its own narratives, which run parallel to the themes alluded to by his choice of texts and imagery.

The idea of resilience underscores “Rhythm for the Suffering”, uniting both Hodge’s artistic methods and the prevailing themes they express. There is resilience through the act of reclaiming and strengthening materials that have been cast off and discarded by society, materials that have been deemed no longer worthy or declared to no longer have value or meaning. His choice of texts, drawn from song lyrics (particularly hip-hop), resonates strongly with this theme, communicating a sense of energetic perseverance and optimism, albeit guarded, for the future. As reflected in the exhibition’s title, though there is suffering, it is still possible to celebrate and enjoy life, a notion explained by Hodge’s sentiment that “while I’m going through my personal tragedies, failures, and adventures, I’m going take it in stride…happiness is a choice.” “Blessings on Blessings on Blessings” embodies this perspective, providing a mantra-like affirmation of everything there is to be thankful for. Using a layer cake as a metaphor for the complexity and richness of the African-American experience, “Pound Cake” also builds on the theme of resilience; while commemorating the past, with cutout imagery ranging from Zulu warriors to contemporary rappers, it simultaneously looks to the future, embodied by a neon sign spelling “New Black” affixed to the top.