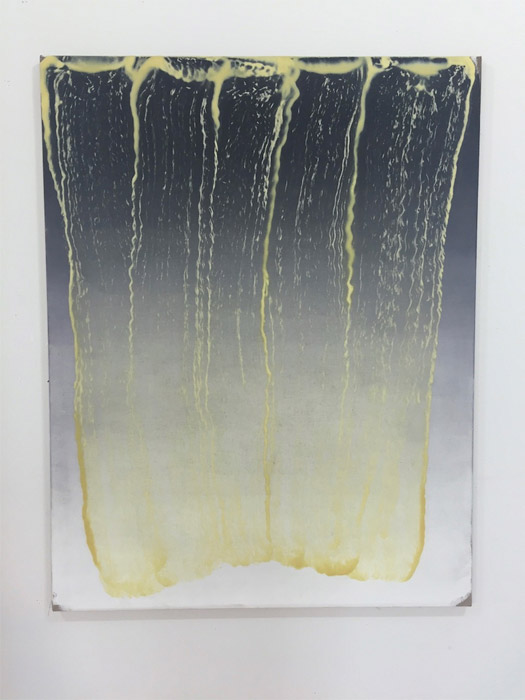 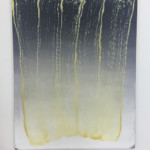 Robert Janitz has produced a set of new paintings, each belonging to one of the artist’s two distinct and highly recognizable ongoing bodies of work – both of which interrogate their medium, simultaneously exploiting and undermining the narrative impulse inherent in picture observation. The “brush paintings” feature a mixture of oil, cold-wax medium and flour, applied in wide swaths over still-visible underpaintings. The “reverse portraits” depict, in varyingly legible terms, the anonymous backsides of human heads. The artist, through the fastidious repetition of these two forms, has established an idiosyncratic visual language; his practice represents an unlikely confluence of Minimalist-esque rigidity and intuitive, expressionistic abandon. The self-reflexive paintings are generous and ambiguously figurative, allowing the viewer to dictate whether their semi-pictorial subject matter manifests or fades into painterly artifice.

For each of his exhibitions, Janitz conceives a metaphorical lens through which to conceptualize his practice. These works were influenced by his interest in fabulation, the mirage and science as fiction. “Hypothetical Types of Biochemistry”, the show’s title, alludes to a peculiar characteristic of super hot plasma, which causes inorganic particles of cosmic dust to exhibit lifelike behaviors. Janitz began considering the possibility of “inorganic life” and his paintings themselves as alternative life forms.

The works comprising this exhibition introduce a number of modifications to his painterly vocabulary. Most evidently, a number of these pieces feature gradients of color, rather than monochrome backgrounds. Their palettes, too, are different, featuring pastels and neons, inspired by Los Angeles’ aesthetic and cultural landscapes. Certain other formal aspects appear subtly awry: while Janitz filled earlier paintings geometrically, his brushstrokes squaring off at the canvas’ edge, here he allows them to converge inwards, leaving swaths of his surfaces unadorned so that the works resemble curtains. These nuances, while superficially slight, appear radical to those familiar with the artist’s recent oeuvre. In addition, the artist had produced an audio sculpture, a chiming noise taken from the film “Reyner Banham Loves Los Angeles”, which is triggered by a motion detector upon visitors’ entry to the gallery and serves as an “audio mirror” for the ideas of veiling explored by the works on canvas.

Janitz’s practice draws from a diverse cross-section of Art History. The brush paintings’ apparently abstract compositions evoke depictions of curtains – and thusly conjure a series of painterly precedents from Rembrandt to Ray Yoshida. The acknowledgement of the curtain – typically a secondary device for framing and hiding a subject – is a sly gesture that foregrounds the act of looking and interrogates the relationship between pictorial legibility and illegibility. The color gradients recall those used by Ed Ruscha to depict the LA sky in his early text paintings, tapping into shared romantic mythologies surrounding Southern California. Perhaps the artist’s most persistent influence is Robert Ryman: like Ryman, Janitz is interested in the frank, non-illusionistic treatment of materials, as well as the possibility that compositional constraints can, paradoxically, lead to a profound variety.

Robert Janitz has been the subject of exhibitions both internationally and in the United States. He has mounted shows in numerous cities including New York, Paris, Berlin, and Brussels.