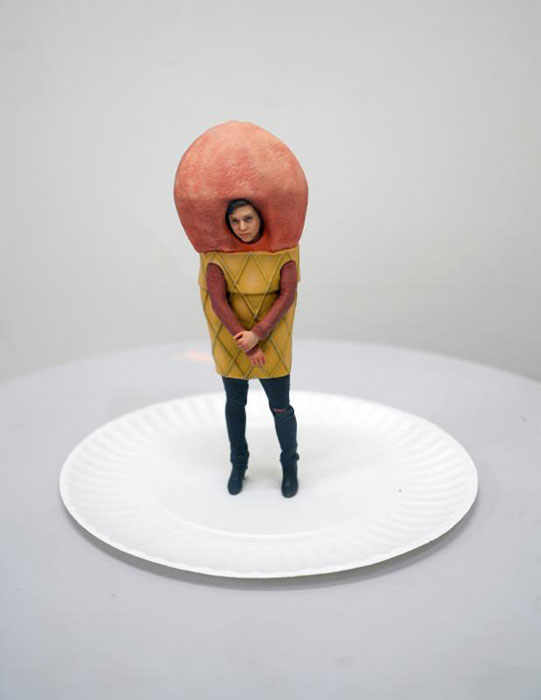 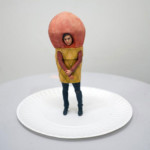 With this exhibition, Rocklen presents a series of brand-new sculptures – each of which consists a 3D-printed facsimile of a person wearing a food costume, scaled to the approximate size of the referent cuisine. The chosen foodstuffs are typically American fare: hamburgers, hot dogs, cupcakes. The artist toys with scale and material, using novel technology to alienate immediately recognizable objects from their typical contexts, and engendering a uniquely modern, emphatically American sense of uncanny. At once playful and haunting, the body of work investigates consumption under late capitalism, illustrating the bizarre identification of viewer with object, consumer with product.

As is typical of Rocklen’s practice, a body of work that initially appears comical – even absurd – slowly reveals a set of subtle, sober concerns. In this case, the sculptures carry metaphorical implications about mass production and capitalist consumption, especially in relation to the art object. The pieces slyly expound on the fraught relationship between artist, work and market – lamenting the demand that a work reveal its author while also maintaining its salability, a phenomenon that ultimately forces the artist to commodify his own person.

These sculptures also serve as monuments to a kind of banal heroism, which Rocklen considers a defining attribute of our present day. The works mythologize the individual, resonating as both specific – each figure is a real person, a friend or colleague of the artist’s – and generic – in the costume’s portrayal of familiar food items. Rather than genuflecting to the desensitizing, dehumanizing crush of mass-production, the artist ennobles the struggle for individuality in the modern era.

The exhibition makes explicitly evident Rocklen’s interest in the confabulation of so-called high and low culture. Like his Pop Art forbearers, the artist places quotidian, often commercial forms into the stately, aggrandizing context of fine art. Mining the familiar visual culture of the American middle class, he neither lampoons nor elevates his subject matter, instead enacting a subtle cultural leveling. Even his modes of display seek to undermine these hierarchies: each work in this show is displayed on a foam-milled facsimile of a cheap paper plate, placed atop a dedicated pedestal. These works are reproductions of pre-existing objects in a new material; this aspect of their process highlights the alchemical nature of his work, and the transfigurative possibilities of art-making at large.

Ry Rocklen lives and works in Los Angeles, where he was born in 1978. He has been the subject of solo exhibitions at galleries and institutions both stateside and abroad. His work is included in the collections of the Hammer Museum and the Los Angeles County Museum of Art. He was featured in the 2012 iteration of “Made in L.A.”, the Biennial exhibition at the Hammer Museum, and this past summer was featured in “The Arcades: Contemporary Art and Walter Benjamin” at the Jewish Museum in New York.

This is Rocklen’s first exhibition with Team.