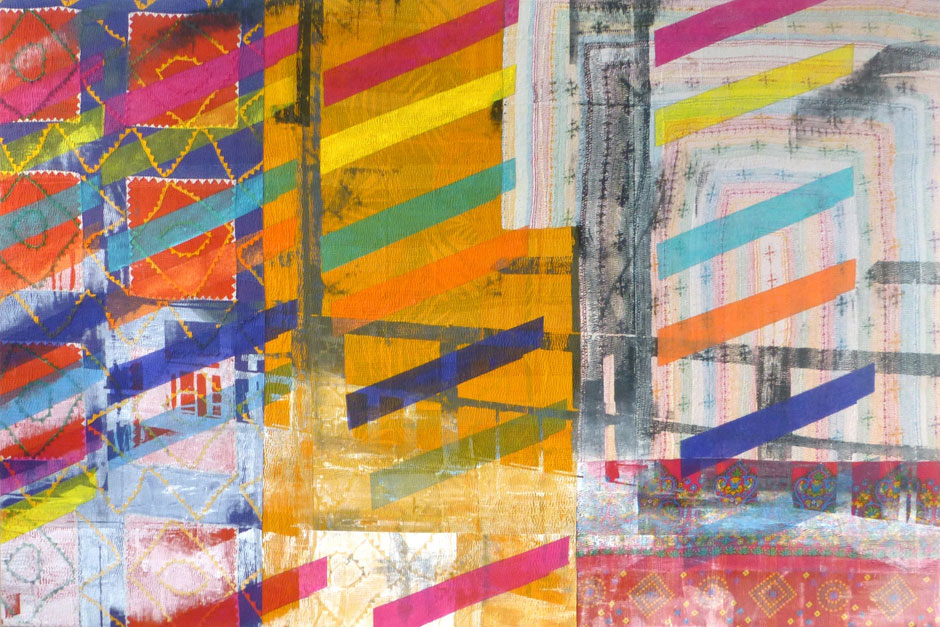 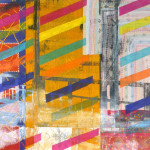 Jane Lombard Gallery is pleased to present Shezad Dawood’s “Anarchitecture”, the artist’s second solo exhibition in the US. Featuring a new series of textile paintings inspired by the noted Czech-American architect Antonin Raymond’s projects in India and Japan, the artist takes viewers on a thought-provoking journey that examines transcultural influences and the intersections between Eastern and Western schools of art, architecture, and philosophy.

In 1921, Frank Lloyd Wright dismissed Raymond as his chief assistant on the Imperial Hotel in Tokyo for questioning Wright’s consideration and understanding of Japanese culture and traditions. Antonin Raymond went on to set up his own architectural practice in Japan, and in 1935 was invited to design the dormitories of the Sri Aurobindo Ashram in Pondicherry – a beautifully understated but oft-overlooked and underappreciated synthesis of modernist architecture in India.

It is from this building, and specifically from its iconic window shutters, that Shezad Dawood takes his inspiration for the new paintings presented in “Anarchitecture”. Playing with the concepts of light and shade, positive and negative, the artist examines the relationship between Raymond’s incorporation of Japanese and Indian ideals into his work as an architect, as well as the discourse around negation in the Kyoto school of philosophy and its reconfiguring of a more positivist Kantian formulation. Dawood’s works also manifest the artist’s deep interest in a variety of philosophers, expressing the tension of basic formulations such as “both/and” and “either/or” posed by Schopenhauer and Heidegger, whose roots can be found in the Indian logician Nagarjuna of the 2nd and 3rd century. Stripped back, but by no means austere, this series of paintings celebrates color as a vital principle in Dawood’s aesthetics of negation.

Alongside the new textile paintings, carefully considering and utilizing the gallery itself as an architectural construct, Dawood is also presenting two wall-mounted neon sculptures that form part of his on-going, related research into Modernist Architecture, Indian spirituality and tantric forms: “Pondicherry Mon Amour (after Antonin Raymond)” and “I.A.M”, both from 2011.

On May 3, from 6 – 7:30 PM, the artist will be present at Jane Lombard Gallery for a book signing and talk with Shanay Jhaveri to celebrate the publication of Jhaveri’s new book, Chandigarh is in India.

Shezad Dawood (b. 1974, London) studied at the Royal College of Art before receiving his Ph.D. in Fine Art from Leeds Metropolitan University. Dawood’s work has been exhibited internationally, including the Museum of Modern Art, New York (2015); Taipei Biennial, Taiwan (2014); Marrakech Biennial, Morocco (2014); MACBA, Barcelona (2014); Witte de With, Centre for Contemporary Art, Rotterdam (2013); Modern Art Oxford (2012); Busan Biennale, South Korea (2010); Tate Britain, London (2009); and the 53rd Venice Biennale, Italy (2009). Most recently, Dawood has held solo exhibitions at Pioneer Works, Brooklyn, New York (2015); Parasol Unit, London (2014); and OCAT Xi’an, China (2014). His feature film “Piercing Brightness” (2013) was exhibited widely at international festivals, is distributed by Soda Pictures on Blu-ray/DVD and iTunes, and was screened at the Museum of Modern Art, New York. He is a Research Fellow in Experimental Media at the University of Westminster and currently lives and works in London.