Sleep with the Fishes 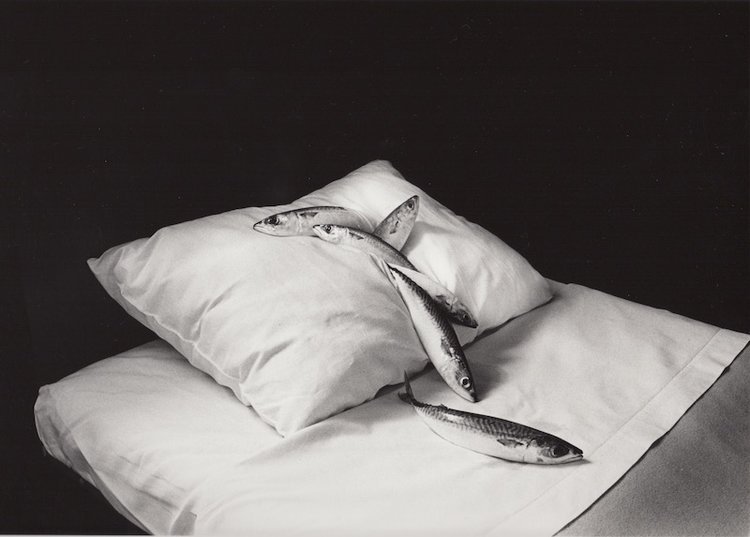 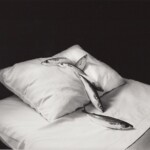 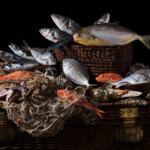 Robert Mann Gallery is pleased to present our summer exhibition, “Sleep with the Fishes”, that explores the formal repetitions and shared motifs of fish in both historical and contemporary photography. Fish have been the subject of art throughout history, beginning in ‘primitive’ art from many cultures. In ancient civilizations of the West, fish were a continuous depiction of an important food source. As time went on, fish began to hold more symbolic meanings, such as in the Hellenistic period they were known to represent a divine source of life.

Decorative fish designs of the Greeks and Romans were often tied to mythological significance and later adopted by early Christians as religious symbols. Fish markets became important cultural trade centers and destinations for wealthy tourists who made the Grand Tour of Europe to view the roots of western civilization, such as the “Roman Fish Market, Arch of Octavius”, portrayed by German painter Albert Bierstadt in 1858. Nearly a century later, Walker Evans captured a “Fish Market Near Birmingham, Alabama” in 1936, taken while working for the Farm Security Administration (FSA) photography program with the goal of documenting and reporting the plight of Americans during the Great Depression.

During the Renaissance, the non-religious depiction of fish became more widespread and realistic paintings of fish appeared, especially in still lifes. Paulette Tavormina’s newest work, “Just Caught”, 2019, exemplifies the realistic still life tradition of the 17th century Netherlands and her Sicilian heritage plays on the namesake of our exhibition, which references the haunting old Sicilian message of receiving clothing wrapped fish…

In the twentieth century, fish were painted by many modern artists, including Matisse, Picasso and Klee. Some of these artists’ fish images are pleasing, while others are violent or ambiguously emblematic. “The Goldfish”, 1912, by Henri Matisse, which was the start of a recurring subject for the artist, was a clear influence on Keith Carter, “Goldfish”, 1998, whose ghost-like fish swim amongst themselves, trapped in the never-ending circle of a fish bowl. In Japan and China, fish have been an important theme in art and their use has been highly symbolic, sometimes even considered mystical. In Michiko Kon’s “Mackerel & Pillow”, 1979, the artist creates a visual and visceral experience full of tension between an animate and inanimate reality.

Beyond more naturalistic portrayals, artists also use more abstract and experimental imagery to depict fish. Heinz Hajek-Halke, Robert Blackmon and Leslie Gill, used the genre to create avant-garde still life imagery that not only appeals to the eye, but generates a sensory experience of light and memory recall to transform the images into delicate visions of fish.