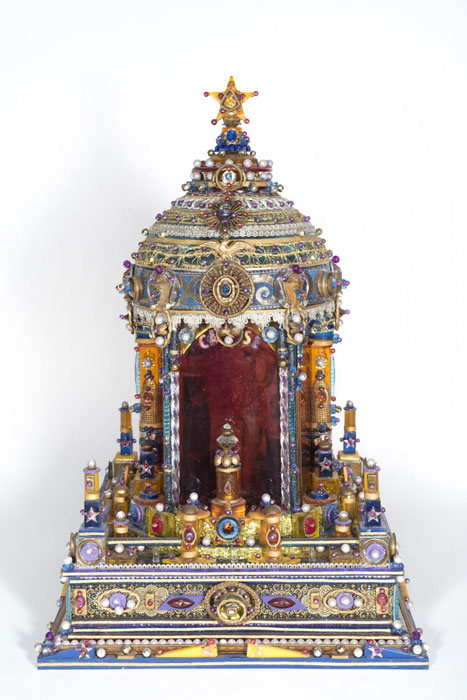 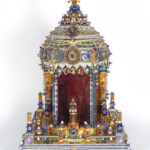 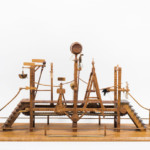 The main gallery features artists Reginald Case, Barry Cohen, Marty Greenbaum, Lisa Kokin, Maureen McCabe and Wayne Nowack who use mixed media in their works. Reginald Case’s opulent monuments salute American culture, from art deco architecture, to jazz music, to the glamour of Hollywood celebrities. The sculptures recall reliquaries because of their dazzling sequins and gems. Wayne Nowack and Barry Cohen both nod to Joseph Cornell in their box constructions, creating esoteric compositions through the juxtaposition of various cultural ephemera. Nowack’s dioramas include an overload of imagery from contemporary cultural references to mystical symbols. Similar constructions by Barry Cohen hark back to the bygone times of American Folk art and curious Wunderkammer cabinets.

In the second gallery, finely crafted objects by Roy Superior and William Umbreit verge on the utilitarian with a touch of whimsy. Umbreit’s series of animated pitchforks defy our preconceptions of functional objects. Their unexpected twists, bulges and contortions recall Brancusi’s innovative sculpture, elevating a simple tool to fine art. Superior’s intricate miniatures of rockers and workmen’s benches honor the great American craft tradition while his “fantasy machines” are imbued with a sense of irony and humor.

“Sorcery & Craft” coincides with related events in New York City during January such as the Outsider Art Fair and Americana auctions which also celebrate folk and craft traditions from American culture.