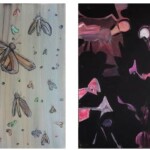 “Grub Party” brings together the paintings of Mimei Thompson and Susie Hamilton and refers to their images of hatching, breeding and changing. The exhibition is a selection of their paintings and drawings of hybrid and biomorphic life whose generative and writhing energy suggests a festive, carnivalesque fecundity. It also shows their different engagement with the metamorphic stuff of paint. Their techniques are very different with Mimei’s intricate compositions of the microcosm made in oil and Susie’s rapid images of figures and creatures made in acrylic, but they share an engagement with the alchemical unpredictability of the painting process to create images that are themselves about process and transformation.

For the current series of works, Mimei Thompson has taken in references including 17th century Dutch still life, the work of early naturalists, such as Maria Sibylla Merian, and Japanese ikebana. She is looking at the dramas of metamorphosis in nature, as an analogy for the mutability and interconnectedness of all life, as played out on a tabletop scale.

Susie Hamilton‘s work has been consistently based on the theme of mutation, her figures morphing into the non-human and abstract. Her recent work, based on Ovid’s “Metamorphoses”, clearly foregrounds this topic since Ovid’s characters are acutely vulnerable to transformation through the power of nature and the overarching activity of gods who can transform themselves and all creation into ‘bodies new and strange’. In ‘Grub Party’ Susie is showing drawings and paintings relating to Ovid’s hectic, interrelated world of divinities, people, animals, insects and plants.

Mimei Thompson studied at the Glasgow School of Art, Central St Martins and the Royal College of Art. She has been selected for Jerwood Contemporary Painters, Studio Voltaire Open, the Marmite Painting Prize, Exeter Contemporary Open and Creekside Open. She has organised numerous group exhibitions, including at the Herbert Read Gallery in Canterbury, and at Blythe Gallery and Transition Gallery in London. She participated in a residency at the Atlantic Center for the Arts, and has her work in the collection of Arts Council England. Thompson has recently had solo shows at Trade Gallery Nottingham, Queens Park Railway Club Glasgow and Art First Projects London. She lives and works in London.