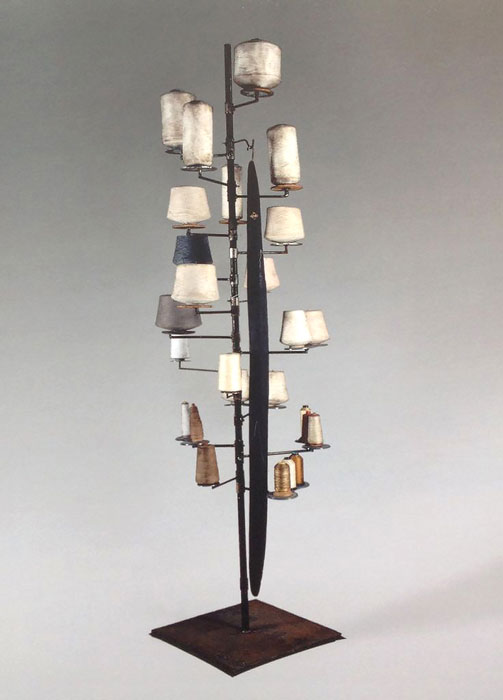 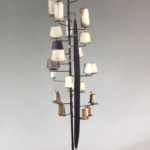 Marc Straus proudly presents “Sutures”, a group exhibition of artworks that employ weaving, sewing, and/or fibrous elements such as thread in the composition.

Weaving and sewing were traditionally recognized as craft, and women’s work, but its importance has outgrown such narrow considerations and it is now an integral part of the work of artists from around the world, both men and women. “Sutures” explores the continued invention of art within this broad genre. How does an artist imbue a strong sense of history and memory into this delicate process? From woven object to sculpture, each artist introduces his/her own distinct thread-work that elicits an individual expression of labor, love, and intimacy. Consider the process of creating the woven object: a work may begin with a single string and conclude as a complex and interconnected whole. Taken as a metaphor for life, weaving mirrors perhaps the circulatory system; arteries and veins, and speaks to the intricate web of human consequences, each choice as important as the next ultimately culminating in a fragile and complicated existence.

The exhibition title is borrowed from a featured work by Louise Bourgeois, “Sutures” (1993). Bourgeois came from a family in the textile business. Upon arrival in New York, her first studio as a young artist was a former thread factory in Brooklyn. The turn-of-the-century thread spools embedded in this sculpture were scavenged from this studio. Around 1992, Bourgeois, then in her eighties, began to focus inward and produced autobiographical art. In “Sutures”, she finally used the spools, kept away for 50 years, perhaps to reference her childhood, linking her fears and hopes inseparably to her art. Along with her monogrammed childhood lapel pin, the sculpture uses actual artifacts from throughout her life. Bourgeois’ handmade and poetic works were to influence the next generation of important artists, who like her have since thoughtfully fused the humble art forms of weaving, sewing and sculpting.

Using traditional methods of rope weaving and straw braiding as well as techniques of her own design Maria Nepomuceno (Brazil) has, since the early 2000s, developed a process of sewing coils of colored rope in spirals. She explores the potentially endless permutations of this adaptable form in sculptures and installations that incorporate beads, playful ceramic forms and found objects of varying sizes. Often realized in carnival-bright colors, these works are chromatically, culturally and metaphorically rich, suggesting animals, plants, the human body and landscape ranging from the microscopic to the macrocosmic.

Michele Ciacciofera‘s (Italy) piece included here is part of larger, complex conceptual installation, “Janas Code”. The three-paneled work is based on the legends of his native Sardinia: mythical Janas fairies left messages and materials for humans to later find, that aided their early societal developments. The myths are a means to examine the “centrality of women to Sardinian society and highlight their crucial role in the preservation and transmission of memory to the future generations.” The gridded frame supports a woven network of coded objects, recalling the secret alphabet of symbols of the Janas, representative of collective memory and knowledge being passed down through generations and the cycles of myth becoming human history

In his grand tapestries South African Athi-Patra Ruga (South Africa) uses myths and fantasy to address very real contemporary social concerns – a means to gain just enough distance from personal grief to analyze, to criticize. Beryl Korot (US) brings together aspects of ancient and modern technology. In the two pieces from her “Curves” series included here her hand-drawn markings have dialogue with the stitches of a programmed sewing machine. Each technique allows the other to be seen in a new way, while remaining an elegant whole. The work also calls attention to the influence of new technology on ancient ones-the computer controlling the sewing machine.

Sonia Gomes (Brazil) makes sculptures in cloth and wire, eclectic fabric contortions that in their sheer candor, become impressively expressionistic; seemingly free to do what they like. Skin is important within the body of Gomes’ work. The organ of sensuous contact with the world, it at once defines and limits experience. Cloth is a second skin, and a sense of personal history permeates her fabric sculptures. A believer in the élan vital, she trusts that every material is magnetized with the latency of life.

Brent Wadden (Canada) integrates sections of his own hand-woven weavings to create compositions that frequently relate to the hard edge abstraction of Ellsworth Kelly and Robert Mangold. Wadden’s tactile paintings blend craft and modernism in an entirely new conversation.

Elaine Reichek‘s (US) works referencing Greek mythology, for example “There Was a Lovely Thing” examines the cultural habit of retelling these ancient myths, with retellings that double back like the threads themselves to be ever relevant to new audiences over time. Reichek’s “Minimally Existent” (Marilynn Robinson) memorializes the words of another artist through a painstaking process.

Each of Martha Tuttle‘s (US) works can feel like a universe upon itself. Each material is distinct: constant reminders of surface changes between passages, yet comfortably sewn into one. Jayoung Yoon (Korea) born in South Korea and working in New York, weaves her visceral art from strands of her own hair. Half body-art, half-sculpture, Yoon’s art embodies the commitment and durability of the artist.

Maartje Korstanje (Netherlands) creates sculptures that are often based on beauty in nature incorporating an amalgam of materials including thread. Korstanje’s work reveals biomorphic organic forms that are indefinable but yet strangely familiar. The threads in the work resemble sinewy veins that suggest a sentience that pulse beneath.

Julia von Eichel (Germany) living and working in New York, seems to seek control over chaos in her newest works, attempting to sew fabric over an armature of jagged wood and plastic. The wooden dowels stabbing against the constraining fabric skin, the plastic balls, the innards, spilling out. At once ethereal and fleshy, corporeal forms coming in and out of existence simultaneously in a perpetual tortured effort to stay whole. New York artist Lisa Hoke (US) is known for her large-scale installations that weave discarded ephemera and waste into ebullient compositions that breathe second-life into otherwise junk materials.

“Sutures” is in honor of Roman Cotton Goods. Roman Cotton Goods was Marc Straus’ father’s store at the corner of Grand and Eldridge Street. This area of the Lower Eastside housed some 400 textile businesses. Marc grew up working at the store until he graduated from medical school. He reminisces that as a kid sheets were limited to a thread count of 128 (muslin) and then weaving became more and more refined. The most beautiful bedspreads and rugs included patterned weavings.