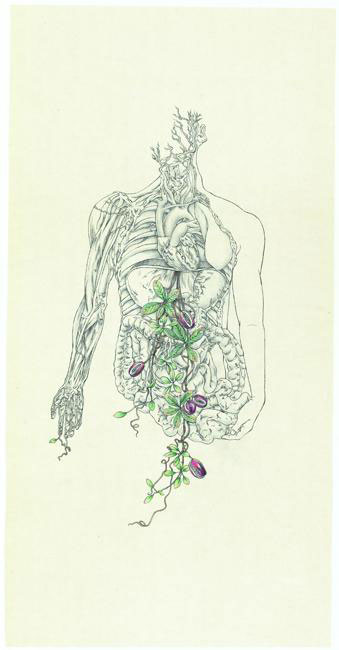 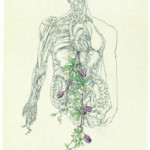 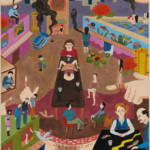 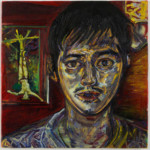 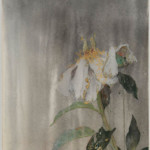 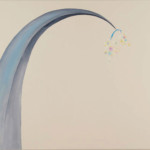 As Tabaimo (1975) has written, the Japanese word “Jitto means to be motionless, to maintain a particular state. Though the dictionary definition is thus simple, I personally have a further image of jitto: meaning to perform a certain act continuously when the body is constricted in some way – as opposed to being stationary by one’s own volition. We use the expression jitto miru in Japanese to mean gazing at something intently, staring, and surely here too, the entity that is the subject is being compelled by the object of its gaze to concentrate so hard that it cannot even move properly.” Tabaimo has selected four younger Japanese artists who share these same sensibilities but express them in different styles for us to gaze at: Tat Ito (1978), Ataru Sato (1986), Ryo Shinagawa (1987) and Kyoko Suematsu (1978).

The works range from traditional Japanese Nihonga style, narrative stories, self portraits, light flowing color field paintings and surrealist drawings. Ancient techniques blend with contemporary styles as the works mesmerize the viewer while the viewer is mesmerized by the images, characters, organs and faces staring back.

Being drawn into a work of relatively small size with tiny animals and humans immediately invites narrative reading from our own imagination and from a dream diary written by Tat Ito. The vibrant colors and child-like figures are fictional and contrast with the diary entry that invoke the subconscious and accompanies each painting. The many self portraits in various sizes by Ataru Sato combined into one drawing are direct. The biographical references surround an oval face with dark brows which continue onto a bridge in the upper left hand part of the work. Below, intertwined flowers form a body surrounded by miniature portraits and buildings. The contrasting styles used to present the self between these two artists is captivating.

Shinagawa’s small paintings of flowers past their prime, shedding their petals, would normally seem sad but they have a brightness due to the mineral used. The details and richness of the background painted in fine strokes of translucid colors are delicate and soothing to the eye. Time stands still and the flower floats in our midst. Likewise, the large, airy paintings of Suematsu billow in space. The rich, lively, transparent colors engage us as if to take us up in the sky along with them.

Jitto was conceived by Tabaimo over the past year. She has contributed three drawings to the show, each with a separate part of the body. The head, torso and foot is combined with plants and drawn in an eerily anatomically correct fashion – as if the plant were an integral part of the body’s organs. They seem naturally bound together and surreal.

Tabaimo represented Japan in the Venice Biennale in 2011 and participated in the 2007 and 2011 editions. She exhibits video installations and drawings regularly in Japan, the United States and Europe and her work is included in many international museum collections. She is currently exhibiting at the San Jose Museum of Art. Kyoko Suematsu and Tabaimo collaborated for the Dior window presentation in Ginza, Tokyo, in 2012. Tabaimo and Suematsu’s works have been presented at Art Basel. In 2014 Suematsu received the Jury’s Special Prize at Tokyo Design Week Art Fair. Tat Ito studied in the United States and has exhibited in New York. He recently returned to Japan and continues to pursue his dreams. Ataru Sato studied at Kyoto University of Art and Design and participated in INSIDE at the Palais de Tokyo, Paris. Ryo Shinagawa studied Japanese painting at Kyoto University of Art and Design and spent 2012 in Europe while studying at HEAD, Geneva.

A publication accompanies the exhibit and is available through the gallery.

This exhibition has been made possible thanks to the collaboration of Gallery Koyanagi, Tokyo.