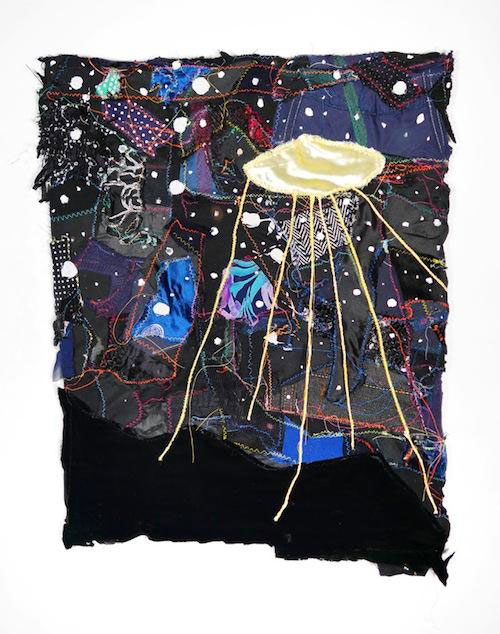 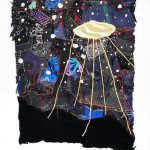 Knopke combines the American tradition of quilting and the European tradition of tapestry making into wall-based works that reference both collage and painting.

Using friends’ and family’s used clothing, sheets, towels, totes or duffels, Knopke breaks them apart and reassembles them through sewing. Each piece of fabric has its own history and physical characteristics. A shirt collar may be joined with lace, fringe, terrycloth or nylon. New patterns are created, textures subtly shift, threads dangle. Small rocks or shells may be included. Night skies, dense landscapes and bodies of water are suggested. There is radiance and energy to each work, whether large or small.

Two works in the exhibition are site-specific and cover two walls of the gallery. These tapestry-sized works resemble giant collages: disparate elements are brought together into a unified whole. Either primarily black or white, their vastness can evoke both the sublime and the cosmological.

This is Knopke’s first solo exhibition with the gallery. He has had other solo exhibitions in New York at Feature, Inc. and I-20 Gallery and his work has been included in many group exhibitions, including Grimm Gallery, Amsterdam and Nudashank, Baltimore. In 2014 two large-scale site-specific installations were exhibited at the Frances Lehman Loeb Art Center at Vassar College, Poughkeepsie. Knopke received his BFA in 1994 from Virginia Commonwealth University, Richmond and his MFA in 1998 from Yale University, New Haven. He lives and works in Brooklyn.