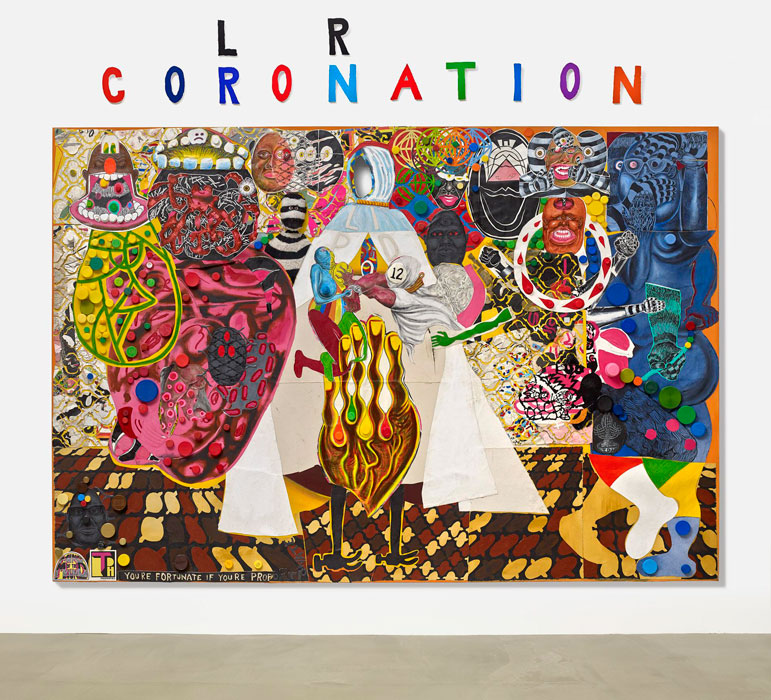 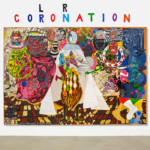 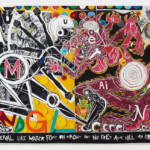 Comprising a new series of paintings, this exhibition by the Houston based artist further expands his interest in storytelling. Hancock has long been admired for his ability to meld a deep and personal interest in narrative with a particularly rigorous and physical approach to painting. His intricately detailed compositions are loaded with imagery from a collection of sources, including comic books, action figures, motifs from childhood, and grand manner history painting, creating an ever-expanding lexicon to tell the tales of the Moundverse and its cast of characters. In these new paintings, Hancock engages the full breadth of his aesthetic arsenal, unfolding his mythology with a pantheon of new quasi-deities and villains alongside Torpedoboy, Hancock’s superhero doppelgänger.

The title of the show, “Pandemic Pentameter”, reveals the centrality of language and wordplay in Hancock’s practice. In “The She Wolf Amongst Them Fed Undom’s Conundrum” (2016), Hancock includes the absurd, lengthy palindrome, “Flow so renal like water font on madam not no fret awe kill an eros wolf.” Although lacking clear semantic meaning, the urgency of the phrase matches the flurried fisticuffs of the figures in the painting and enhances the work’s own reality. Hancock’s playful kneading of words and syntax is mirrored in the accumulation of visual references in his works, as with the intricate assemblage of images in “When They Found Me I Wasn’t There, Version #2” (2016), that come together to form a unified picture despite its fragmented composition.

The complexity of Hancock’s narratives is echoed by the increasingly layered nature of his collaged paintings. Sculptural elements and daubs of heavy impasto emerge from the canvases, piercing the boundary between two and three dimensions. The flattened, frieze-like perspective of these works creates dizzying scenes of simultaneous action, and his strong vertical lines and recessed figures create a spatial understanding that invite the viewer into the picture plane. Although the inclusion of ready-made objects and mixed media elements intentionally diminishes the indexical evidence of the artist’s hand, Hancock’s past as a cartoonist and passion for storytelling is still evident in this new body of work. Through this synthesis of innovative methods, coupled with the layering of word and image, Hancock is able to bridge the divide between his own mythos and our reality.

Trenton Doyle Hancock was born in 1974 in Oklahoma City, OK. Raised in Paris, Texas, Hancock earned his BFA from Texas A&M University, Commerce and his MFA from the Tyler School of Art at Temple University, Philadelphia. Hancock was featured in the 2000 and 2002 Whitney Biennial exhibitions and his work has been the subject of one-person exhibitions at The Contemporary Arts Museum, Houston; The Modern Art Museum of Fort Worth; The Museum of Contemporary Art, North Miami; Institute for Contemporary Art at the University of Pennsylvania, Philadelphia; The Studio Museum in Harlem, New York; The University of South Florida Contemporary Art Museum, Tampa; The Savannah College of Art and Design, Savannah; The Weatherspoon Museum, Greensboro; Olympic Sculpture Park at the Seattle Art Museum, WA; The Fruitmarket Gallery, Edinburgh; and Museum Boijmans Van Beuningen, Rotterdam, The Netherlands.