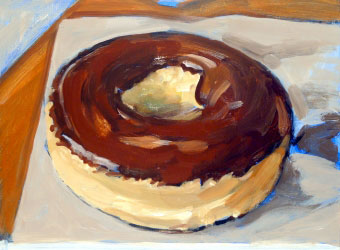 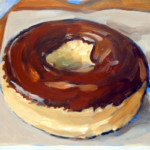 “You’re soaking in it”. (Spoken by Madge, a manicurist extolling the virtues of Palmolive Dishwashing Liquid TV commercial, 1970s)

The food, clothing and consumer products in Walter Robinson’s paintings are instantly familiar. Cheeseburgers, gin bottles, swimsuits and donuts are the stuff of life, or at least somebody’s. Is that a Whopper or a Big Mac? Gordon’s or Beefeaters? A Lands’ End one piece, or is it from Target?

Advertisements, product packaging and catalogues provide Robinson with unlimited source material. Yet, keen editor that he is, each painting and its subject becomes an archetype: there may be lots of polka dot swimsuits out there but Robinson’s seems like the one.

The subjects in Robinson’s acrylic on linen paintings fall under two broad categories: still life and portraiture. Art historical references abound: the brushwork in a painting of an Excedrin bottle may call to mind a Manet still life; the soft surface of a men’s tattersal shirt could be from a Fairfield Porter portrait. Yet Robinson makes them all uniquely his own: the banal becomes something more, and maybe that model in the Macy’s insert really does have something to say, after all.

Walter Robinson (b. 1950) is a New York artist and art critic. He has exhibited his work at several New York City galleries since the 1980s, including Haunch of Venison, Lynch Tham and Metro Pictures. “Walter Robinson: Paintings and Other Indulgences,” a retrospective exhibition of 90 works dating from 1979 to 2012, opened in 2014 at the University Galleries at Illinois State University in Normal, IL, and traveled this winter to Moore College in Philadelphia; its final appearance is at Jeffrey Deitch in SoHo, where it opens in September.