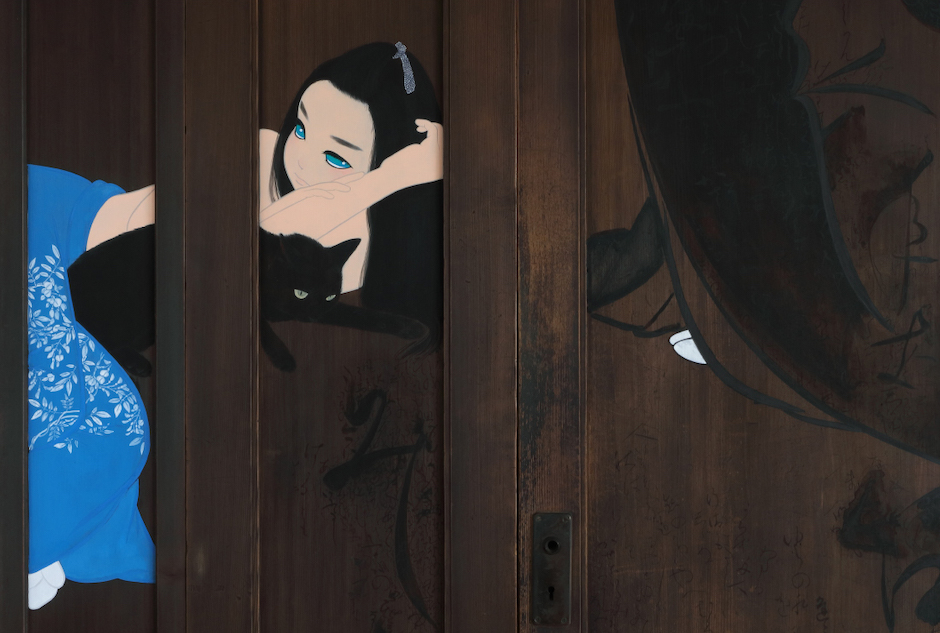 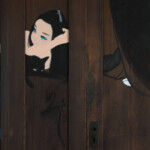 Mizuma Art Gallery is proud to present an exhibition by Yamaguchi Ai, titled “yamaai no uta”. The recent works by Yamaguchi Ai have been primarily on a subject of Kokin Wakashū (collection of Japanese Poems of Ancient and Modern Times) or using parts of a waka poem (a type of poetry in classical Japanese literature consisting of thirty-one syllables) as a title, and has been developing her work as she conforms around the sound and shape of words. The appearance of little girls in her work are likened to the current seasons and landscapes, in which their existence are thought as value of beauty itself, and brings abundant imagination to the viewers.

The title of the new work “setsu ga etoki” painted on an old cedar wood door, and holding the meaning of “Setsu (the name of Yamaguchi’s pet cat) is the guide” is named after Hokusai’s work “Ubaga Etoki”. This was a series of nishiki-e woodblock prints created in the later years of Hokusai’s life, and is based on the stories from Hyakunin Isshu which is a classical Japanese anthology of one hundred Japanese waka by one hundred poets, and was made with an intention of simplifying the stories to allow nursing mothers to explain it easier to children, but it is said that this project was dropped in the middle of the progress because Hokusai’s distinctively complex drawings did not sit well with the publisher’s demands.

On the end of the cedar door work, there is a girl laying on her side with a cat, and on the sections where the surface of the work is noticeably tranquil, the entire poems from Hyakunin Isshu is written in. Just as the brushwork of a waka leads to the folds and patterns of a kimono, and hair of the girl flows into the letters, each letter from the waka that is invisible to the eyes when heard with the ears, brings with it a sense of tension that changes the ambience of space.

The title of this exhibition “yamaai no uta” came from the artist seeking the origins of her surname “Yamaguchi” several years ago when she sought to find its meaning. From Shirakawa Shizuka’s dictionary, “Yamaguchi” is read as “Sankou” and is defined as “Yama-Ai (in-between the mountains)”. As Yamaguchi found the true meaning of her name, she began to imagine all of the livelihood activities of the people living in the mountains and the richness brought by the flowing rivers from the mountains.

In this exhibition, new works such as cedar door, canvases, and ceramics create a landscape within the entire space of the gallery resembling the mountains and place in-between. The word “Yama-Ai” is said to also hold a meaning of sanctums located on steep ground where it is difficult for people to come and go. From covid, it has become necessary for people to keep distance and from that disconnect, we are now experiencing things we normally would not be aware of, such as resistance to oppression of the world not only by human words, but also by invisible things, including viruses, and alternatively, accepting of the tide of the situation with grace.

If the environment that surrounds us now is an embodiment of the place in-between mountains, each of Yamaguchi’s works, arranged like a river running through the mountains, will resonate beautifully as if song is echoing. We invite you to behold the view of the works as you stand amidst the landscape of surrounding mountains.