Yuko Mohri – Form of the Daze 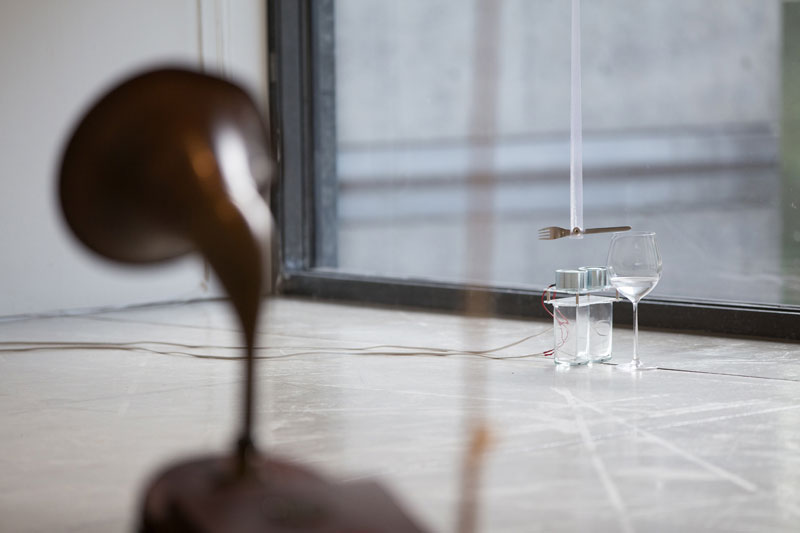 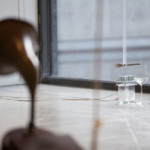 Jane Lombard Gallery is pleased to present the first US solo exhibition by Yuko Mohri, recipient of the 2015 Nissan Art Award. “Form of the Daze” will feature site-specific kinetic installations, transforming found objects into idiosyncratic circuits of movement and sound. Alluding to the surrealist absurdism of Boris Vian’s 1947 French novel, “Foam of the Daze”, Mohri relishes the exploration of seemingly random and often invisible connectivity embedded within the human experience. Mohri’s materials are reconfigurations of everyday items, junk, and machine parts, collected in cities across the world, and activated by the environment around them – bringing the concept of site-specificity to a new level.

In “From A”, scattered pieces of debris are momentarily electrified, using the fleeting interactions of unseen forces to energize each component. Inspired by a metal sign fragment of the letter “A” found by Mohri in New York, the work embodies a philological map of the letter ‘A’, the first letter of the Latin alphabet, and also of the Greek word arkhē, meaning ‘origin’. The Lacanian concept of “objet (petit) a” uses the letter ‘a’ to symbolize an unobtainable object of desire, expressing the perpetual incompleteness of the human condition. The installation emphasizes this impossible gap, suggesting that negative space is as important as the positive, and that the instability of interaction is as important as the objects themselves.

The ideas of connectivity and flux are further explored in an immersive recontextualization of sound and folklore. “Calls” sources musical instruments from geographically diverse locations to form a fragile aural circuitry that channels an otherworldly presence. Japanese spirits of the dead are believed to return home during a brief window of time in the midsummer and New Year. “Calls” seems to suggest that these spirits are at play, communicating to the viewer through the subtle sounds and movements made by objects as diverse as Laotian animal bells, alarm trumpets from English mines, altar implements foraged from an antique store in Korea, and Japanese telephone buzzers. In parallel to John Cage’s aleatoric music, this kinetic sculpture relies on chance and ephemeral environmental forces. Magnetism, light, gravity, and air currents power the delicate mechanisms of the installation, generating a subtle discourse between machina and the elements.

In “Parade (for wall-lining)”, Mohri references composer Erik Satie’s concept of “furniture music,” pieces to be performed as background accompaniment, and like furniture, meant to generate ambience. In this installation, optical sensors continuously scan the pattern of a scrolling wall-lining and signal the performers, various “instruments” ranging from the bell lyre and drum to light bulb and whisk – each contributing their individual part to the symphony of atmosphere.

“Form of the Daze” is Mohri’s whimsical composition, gently drawing our attention to networks that exist between the visible surfaces of our world.