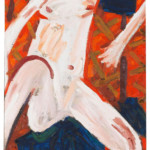 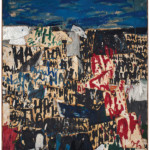 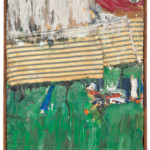 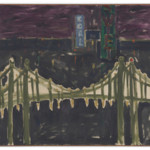 ‘OH THE PLEASURES OF PAINTING. PLAYING IN MUD. THE SMALL CHANGES IN TONE. LIKE MUSIC TO MY EYES. PAINT IS YOU. PAINT IS ME. SUCH A PLEASURE TO PAINT. TO PAINT IS TO LIVE. A MISTAKE. A WRONG TURN. A SLIP IMPOSSIBLE. NOT IN THIS REALM. THE JOY. HAPPINESS. THE PLEASURE OF PAINTING. TO CREATE THINGS LIKE GOD. TO DISTROY AT WILL A WORLD OF MY OWN TO EXPERIMENT IN. A PHALS FALSE WORLD. WHERE NOTHING COUNTS. AND EVERYTHING COUNTS. IT BRINGS ME CLOSER TO TRUTH. TRUTH DOES NOT EXIST. PAINTING DOES. GOOD PAINT. BAD PAINT. RIGHT PAINT. WRONG PAINT. NEVER TOO MUCH. TOO LITTLE. TOO BIG. TOO SMALL. IT IS. THAT IS WHY I LOVE TO PAINT. I WILL ALWAYS BE A PAINTER. OF SORTS’ – Allan Kaprow (1)

Hauser & Wirth is pleased to present ‘Allan Kaprow. Paintings New York,’ the first New York exhibition to shed light on the early painting and drawing practice of celebrated American artist Allan Kaprow. While Kaprow’s radical innovations in the realm of performance shifted the course of twentieth-century American art, he began his career as a painter, studying with Hans Hofmann and focusing on the medium from the mid- 1940s through the 1950s. During this period, Kaprow immersed himself in New York’s vibrant downtown scene and made a significant body of bold, expressive canvases that presaged his later experiments in space, activity, and performance. This exhibition brings together several rarely exhibited bodies of work, including the artist’s New York paintings, action collages, and drawings from the late 1970s, illuminating how his embrace of chance, interaction, and process led to his seminal Happenings.

This exhibition extends the history of Kaprow’s relationship with the townhouse that Hauser & Wirth occupies at 32 East 69th Street in Manhattan. In 1961, Kaprow debuted his environment ‘Yard’ at the space, then the legendary Martha Jackson Gallery. Nearly fifty years later, Hauser & Wirth restaged this enduringly influential work in celebration of the 2009 opening of its first American gallery. ‘Allan Kaprow. Paintings New York’ opens in conjunction with the 60th anniversary of the artist’s landmark 1958 essay ‘The Legacy of Jackson Pollock,’ in which he first introduced the term ‘Happenings.’ Hauser & Wirth is delighted to once again bring Kaprow’s work to 69th Street with an exhibition that enriches understanding of the artist’s early painterly foundations and later experiments in drawing.

Kaprow’s origins as an artist can be traced to a deep-rooted interest in space, subjectivity, and the act of painting. A vigorous expressionist, he captured a sense of raw energy and motion in his application of paint. Many of his studio paintings from the mid-1950s are populated with truncated figures that hint at a surrounding environment, extending just outside the pictorial plane. In ‘Figures in a Yellow Interior’ (1954), Kaprow embraces a gestural visual idiom to depict a group of figures delineated with brushstrokes of vibrant pigment. Full of rhythmic movement, the painting suggests Kaprow’s growing interest in physical immediacy and expressive freedom.

These early paintings also offer insight into the evolution of New York’s downtown art scene, transformed in the 1950s by the emergence of the artist-run spaces collectively known as the Tenth Street galleries. Among these was Hansa Gallery, a cooperative cofounded by Kaprow and fellow former students of Hans Hofmann. Hansa thrived for over a decade, promoting expanded ideas of art and exhibiting Kaprow’s increasingly experimental and sculptural works. He later wrote, ‘I had begun to clarify, even then, what was a multi-leveled attitude toward painting.’

It was during this period that Kaprow began what would become a relentless, lifelong investigation into the often – ambiguous relationship between everyday life and art. For Kaprow, even the most banal routines were rife with creative fodder: ‘The everyday world is the most astonishing inspiration conceivable. A walk down 14th Street is more amazing than any masterpiece of art.’ His daily observations and experiences as a city-dweller often became the foundations for his investigations into the possibilities of paint beyond the canvas, notably in his 1955 George Washington Bridge paintings. Kaprow conceived this body of work after studying industrial painters, suspended by ropes, coating the bridge’s beams in layers of red lead paint. These canvases combine expressionist gestures with pedestrian vignettes, foreshadowing his later participatory works rooted in commonplace occurrences.

In 1956, Kaprow began to experiment with the use of quotidian materials – tin foil, newspaper, and hay – in a series of works he referred to as ‘action collages.’ In ‘Caged Pheasant #2’ (1956), ‘Hysteria’ (1956), and ‘Blue Blue Blue’ (1956), he incorporates painting with collage and assemblage. Interested in the primacy of action, Kaprow produced these experimental collages at a frenetic pace. Wrought with incident, they are important precedents to Kaprow’s later turn to action-based performance.

The exhibition concludes with a selection of Kaprow’s drawings from the late 1970s, on view for the first time. Influenced by a Zen, meditative practice, he composed the works by following the rhythms of his breath, continually drawing and erasing marks. Indexical in nature, each ‘Drawing based upon the breath’ correlates to the body’s movements and relative stillness. More contemplative in nature than Kaprow’s earlier paintings and action collages, these delicate works on paper nevertheless continue his insistence on blurring the line between art and everyday life.

(1) In 2017, this statement by Allan Kaprow was discovered by a restorer when he detached the canvas of ‘Standing Nude Against Red and White Stripes’ (1955) to transfer it to a new frame. Covered for more than sixty years by the painting, Kaprow’s lines were scrawled in a revolving pattern along the four stretcher bars.