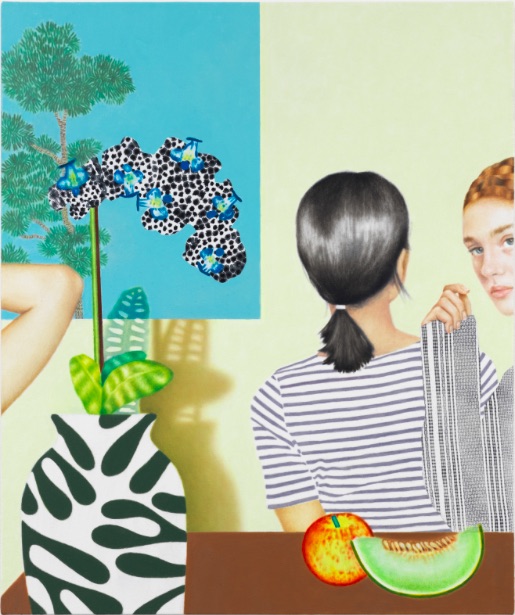 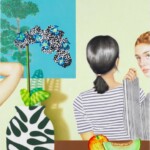 “These artworks are not just beautiful or realistic renderings of static objects. The still life, rather, is an evolving system of representation and of meaning, directly related to the transformations of society and of artistic discourse.” (Margit Rowell, “Objects of desire: the modern still life”, Museum of Modern Art, 1997)

Amanda Baldwin’s paintings carefully tow the line between regular order and total discombobulation. Her newest arrangements are grounded with recognizable imagery – plants and vases, fruits, both halved and whole, standard fare for traditional still lifes – but those perceived securities are almost immediately unmoored by visual manipulations that turn simple scenes into panoptic pandemoniums.

At first glance, the paintings seem relatively straightforward, but slowly begin to disintegrate upon closer examination, toying with the viewer’s assumptions. Each object holds equal weight, creating messy yet meritocratic menageries, where reflections compete with shadows, grounds with supports. That which appears flat suddenly takes on an uncanny depth. An altered light source, like that in “Double Orange Palm”, quietly disrupts a scene, casting neon shadows behind delicately rendered fronds. Outlines of what appear to be windows add another layer to the illusionistic space.

Human figures, manifest a natural extensions of her still lifes. While adjustments in scale enhance the already anthropomorphic qualities of her objects, people enter scenes as equal participants, with their visages, like the surrounding skins, flattened or distilled to component parts, or sometime appearing merely as reflections of their surroundings.