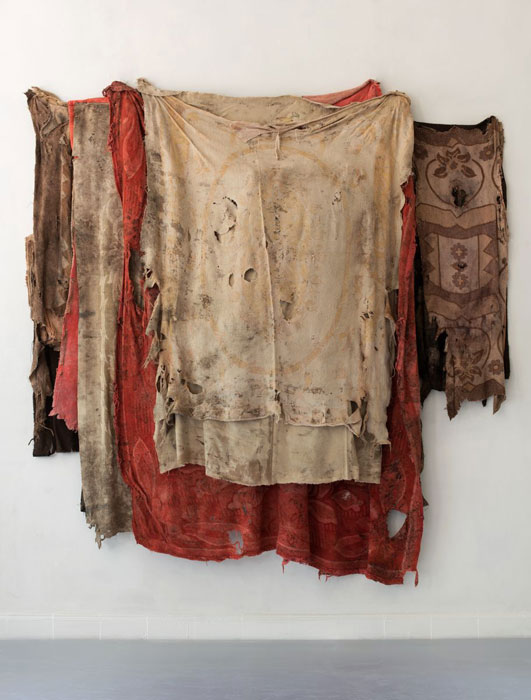 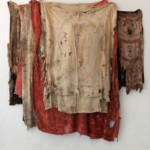 Hauser & Wirth Somerset is proud to present its first solo exhibition by Berlinde De Bruyckere. Occupying the Rhoades and Bourgeois galleries, De Bruyckere has chosen to present two new bodies of sculptural works, selected in direct relation to the spaces they are exhibited in. The pieces presented in ‘Stages & Tales’ are a new artistic direction for De Bruyckere, moving away from the figurative work she is best known for (a shift that began in 2014 with the series Penthesilea) – these new bodies of work are the artist’s most abstract pieces to date.

Hanging from the walls of the Rhoades Gallery are seven new works composed of heavily weathered, semi-decomposed blankets built up in layers, that comprise the series ‘Courtyard Tales’ (2017 – 2018). Since the early 1990s, many of De Bruyckere’s major works have featured structures involving blankets, suggesting warmth and protection, but also the vulnerable experiences that lead one to seek such shelter. In these tactile works the blankets hang, ragged and often in tatters, evoking shrouds. Peculiar bulges hint at something concealed within or behind the blankets, allowing the works to sit proud from the walls. The composition of layered colours in a warm and muted palette with the occasional splash of an untouched brighter tone, evokes images of a painterly nature.

De Bruyckere accumulates second-hand traditional blankets that bring their own history to the pieces; each one is charged with stories and meaning that add an additional layer of complexity and intimacy. The blankets are left outside exposed to the elements, allowing them to decompose. The duration of time, the weather, the positioning – sheltered or unsheltered, folded or stretched, all enforce their presence onto the blankets and will determine their appearance and durability once removed from these circumstances. Weathering them in this way robs them of their original purpose – to provide warmth and shelter. Their colours have faded and the fabric is damaged and weakened, covered in mouldy stains. Ragged holes, caused by exposure to the elements, have been further manipulated by the artist to reference a physical wound, emphasising the loss of strength and the fragility of the material. This deterioration of the tightly woven structure of the woollen blanket speaks of the failure of social structures, also created to shield and protect, but that over time have broken down, allowing the weakest to slip through the cracks. These references to social deprivation are a central aspect of De Bruyckere’s practice, and are particularly compelling at this turbulent moment in history.

The Bourgeois Gallery houses three floor-based sculptures, part of a new series titled ‘Anderlecht’ (2018). Initially resembling piles of blankets stacked on bronze pallets, on closer inspection they are revealed to be wax casts of stacked animal skins, still holding small remnants of the original salted hides, such as hairs, flakes of skin, and grains of salt. These traces of reality are an important element for the artist, underlining the different stages of transition that the work represents. De Bruyckere has worked with horsehide for many years, but it was only in 2014 that she first visited a skin trader’s workshop in Anderlecht, Belgium, where she witnessed thousands of freshly stripped livestock pelts being processed. The image was so potent that she was compelled to translate it into her work. Unlike her previous works with animal skins, here De Bruyckere deviates from realistic flesh-like colours. These powerful works are predominantly grey in colour, built up through layer upon layer of different shades of grey, painted in warm wax, which the artist allows to melt together into a rich palette of colour nuances, bringing a new level of interpretation to the pieces. The sculptures have the appearance of vast, dense, immovable piles; yet the physical fragility of being cast in wax. This ambiguity anchors the viewer in one reality before extrapolating into another, so that nothing is ever quite as it seems.

Both bodies of work have a strong element of the uncontrollable in their approaches. In ‘Courtyard Tales’ (2017 – 2018) this is predominantly present in the first stage of the process, where the destruction by nature’s force is unrestrained, leaving the artist with a material that is sometimes deteriorated to an extent that it can no longer be utilised as a whole structure. With the ‘Anderlecht’ (2018) series, the aspect of unpredictability lies within the painting. Though the process of painting with wax is mostly determined by colour and temperature, which De Bruyckere has mastered through experience, there is no full control of how the different layers will blend. This factor of chance sometimes produces unexpected results that the artist embraces, within this well conducted process of trial and error.

Fundamental to De Bruyckere’s oeuvre are the universal and timeless themes of mortality, human suffering and deprivation – topics we are continuously confronted with in everyday life through the media. Despite the greater level of abstraction in these new works, the human element remains ever present. Without morbidity or pessimism De Bruyckere is exploring the realities of human existence, focusing on our vulnerability as a means of connecting us. She wants her works to offer comfort and compassion – ultimately we all share the same fate and the recognition of this can offer great solace.