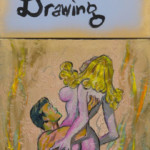 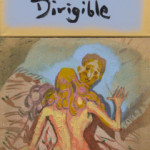 Freight + Volume is pleased to present “Invisible City”, a collaborative body of work by poet Bob Holman and artist Archie Rand. Consisting of 50 canvases inscribed with lines from Holman’s eponymous poem, the project defies the typical binary relationship of illustration and text, instead adopting a radical dynamic of unpredictability and suggestion.

A self-described “call to action” and “hip-hoppy utopic jaunt through a mash-up of physical and metaphysical landscapes,” Holman’s poem was the origin point of the collaboration, a sort of narrative nexus that engages and activates Rand’s canvases. Originally composed for the New Museum’s 2015 IDEAS CITY community initiative, the poem was cut-up and reformulated during the process of collaboration, with the disembodied fragments of text then paired with Rand’s canvases.

The integration of text and image is of critical importance, opening up a third space alongside the visual and narrative, and Rand stresses that without the text of the poem, “the image would simply be a nice painting but without any tether to further meditative capabilities – which is just what we were trying to avoid.” This sort of inter-medium collusion comes naturally to both Holman and Rand. The former speaks of his penchant for ekphrasis, or the notion of art inspired by other art, manifested in his collections of poems related to Matisse’s cut-outs and Chuck Close’s daguerreotypes, while the latter has engaged with religious scripture throughout his career, highlighted in his murals for the B’nai Yosef synagogue and his “613” project, for which he created a painting for each Jewish commandment.

Rand’s unique visual style melds a graphic directness resembling that of pulp comics or graphic novels with a painterly, expressive sensibility; underscored by a vivid technicolor palette, the grotesque subjects of his canvases take on a whimsical character, caught between everyday human depravity and a surreal, dream-like realm. A “crazy quilt world of monsters and demons inspired by Mexican telenovellas and other sources,” these scenes often conflict with the self-identified idealism of Holman’s poetry, with each chunk of the poem often forming a jarring, enigmatic juxtaposition with its corresponding illustration. Lines such as “dance to the music you can see” and “enter through the sky” bear depictions of a vampire attacking a woman and fellatio, respectively, and a painting of a man chained by his wrists to a wall is given the almost mocking epithet “not even athletes know the score.” Spurning logic and passive observation, Invisible City simultaneously mystifies and provokes the viewer to form their own understanding of the relationship between image and text.

Bob Holman is the author of 16 poetry collections including “The Cutouts, Matisse” (PeKa Boo), “Sing This One Back to Me” (Coffee House), and “A Couple of Ways of Doing Something”, a collaboration with Chuck Close (Aperture). He has taught at Columbia, NYU, Bard, and The New School. Founder of the Bowery Poetry Club, Holman previously was a director at the Nuyorican Poets Café and St. Marks Poetry Project. He is co-founder of the Endangered Language Alliance, and hosted the award-winning PBS documentary “Language Matters.” A Ford Foundation grantee in 2015 and Minister of Poetry and Language Preservation at the United States Department of Arts and Culture (not a government agency), Holman lives on the Bowery. Most recently he served as creative consultant for LINES Ballet Company in San Francisco on a ballet based on endangered languages. He will teach at Princeton in Fall 2017.

Archie Rand received a BFA in cinegraphics from Pratt Institute, having studied previously at the Art Students League of New York. His first exhibition was in 1968, at the Tibor de Nagy Gallery in New York. He has since had over 100 solo exhibitions, and his work has been included in over 200 group exhibitions. Rand’s work as a painter, muralist and graphic artist is held in many public collections among which are The Metropolitan Museum of Art, The Museum of Modern Art, The Whitney Museum of American Art, The Art Institute of Chicago, The Brooklyn Museum, The Baltimore Museum of Art, The San Francisco Museum of Modern Art, The Tel Aviv Museum of Art, The Victoria and Albert Museum, The Bibliothèque Nationale de France, The Smithsonian Institution, and The New York Public Library. His illustrated books are in the libraries of over 400 institutions including Harvard, Yale, Columbia, Brown, and Johns Hopkins Universities. Formerly the Chair of the Visual Arts Program at Columbia University he is currently The Presidential Professor of Art at Brooklyn College.

A full-color, limited edition catalogue to accompany the exhibition will be available for sale