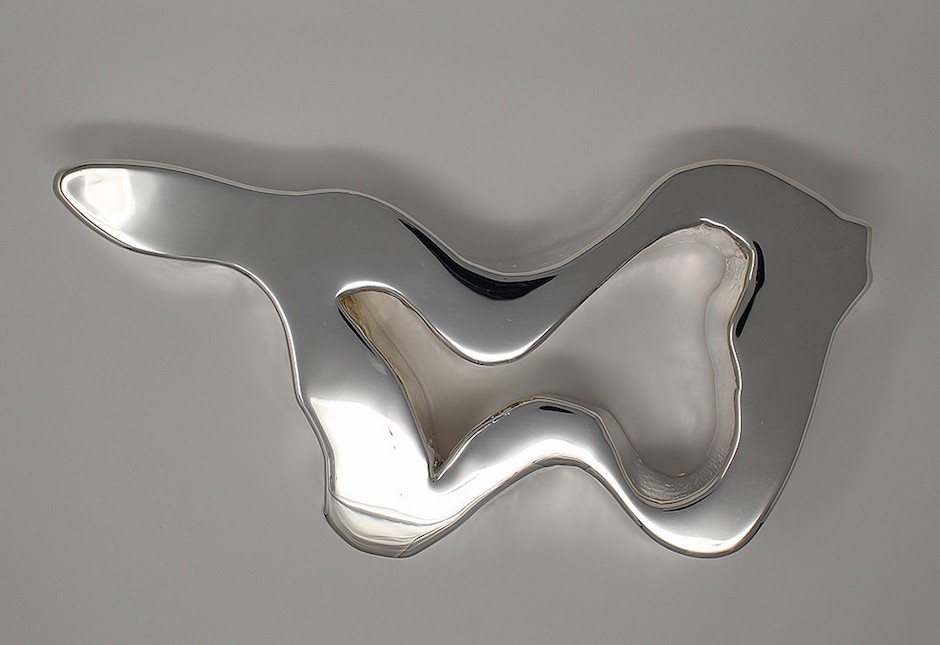 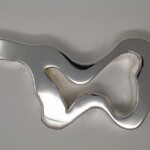 “A Thing Attains A Life” continues Brown’s long-held interest in transformation and unfolding biological processes. The works in this exhibition are based on abstracted shapes that he created for his video “A Quincunx For Bakst” (2020). These foam forms are elemental building blocks from which larger combinatory forms (such as protozoa, animal, and human) are simultaneously created and destroyed. In the oil-on-linen paintings and sterling-silver sculptures on view at Thatcher Projects, Brown isolates these forms and reworks them in order to further investigate themes of transitory life cycles and a constant state of becoming.

To create the sculptures, Brown took the actual foam forms used in the earlier video and entombed them forever in sterling silver, physically and metaphorically transforming them from one state (or lifecycle) to another (from cheap foam to precious metal), in a type of alchemy. The shiny, mercury-like surfaces of these sculptures quickly move the eye around, reinforcing the aspect of drawing and gesture inherent in all of these forms.

A sense of ongoing metamorphosis also permeates Brown’s paintings. He writes of the canvases:
“Each work on view is a thing attaining a life. Heavily worked oil on linen paintings at first seem minimal, but upon closer inspection reveal multiple layers of glazing, overpainting, and nuanced shifting of form, causing the whole to vibrate in place, a moment of becoming tenuously held captive. The interplay between internal and external forms, multiple figure/ground pressures, and variegated coloration create complex visual rhythms. These works — which can be hung in any orientation — oscillate between minimalism and maximalism, constantly shifting”.

Brice Brown has exhibited nationally and internationally, and his work has been reviewed in the New York Times, Artforum, Art in America, Artnews, National Public Radio, and The Village Voice, among others. His work in public collections includes the International Collage Center at Mount Holyoke College, Speed Art Museum, the Baltimore Museum of Art, Dartmouth College, Swope Art Museum, and Yale University. Brown founded Milton Art Bank (MAB), an experimental art space located in a converted bank building, and has also launched two artist-run art journals, “The Sienese Shredder” (2006-2010), and “Tether” (2014-2019). Brown was a regular art critic for the New York Sun newspaper (2006-2009), and for City Arts newspaper (2009-2010). He received a BA from Dartmouth College and an MFA from Pratt Institute, and also studied at the Chautauqua School of Art.