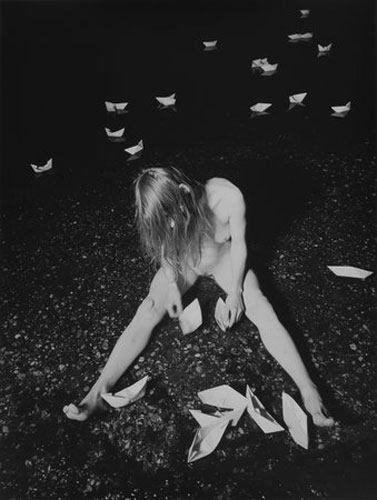 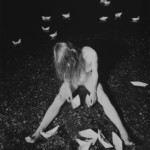 For her Los Angeles debut, Carina Brandes presents a collection of black and white photographs. These minimally lit images seem to exist outside of time, devoid of any temporal signifiers, cultural or technological. Her subjects, usually animals and young women (frequently the artist herself) are, with few exceptions, nude and unadorned, engaged in inscrutably liturgical performances. The geographic and psychological seclusion of the depicted actions endows the pictures with a voyeuristic pleasure, inviting the viewer to a fantastical but fully realized world that is mysterious, meticulous and distinctly female.

Brandes’ exclusive use of the camera’s self-timer is a critical aspect of her work, both conceptually and practically, allowing her to take part in her “performances” and, subsequently, appear as a figure in her own photos, while also establishing the camera as a neutral, mechanical site of observation. This allows the subjects to appear to the viewer as they would in privacy, granting unmitigated access to these strange and intimate events.

These photographs’ enigmatic but evocative narrativity isolates their subjects in chronotopically fixed positions; the still images present singular moments from elaborately choreographed performances, ritualistic dances by which the women and animals traverse the described locations. Certain photos are visually linked, sharing symbolic motifs or settings, but differing in the composition of their constituent elements, thus expressly linking the figures’ passage through time with their movement through space. The power of the medium of photography, according to Susan Sontag, is object-oriented, stemming from its potential for accumulation and collection, and, as a result, gives credence to the fantasy that we might physically organize temporality.

Brandes’ artworks occupy an otherworldly chasm between cinematic diegesis and photographic documentation. Their fragmentary narratives are neither fictive nor documentary, instead reading as corporeal manifestations of the artist’s interiority, providing a point of direct, consuming access to her imagination.

Brandes has been the subject of monographic exhibitions both in the United States and Europe. This is her third solo show with Team.