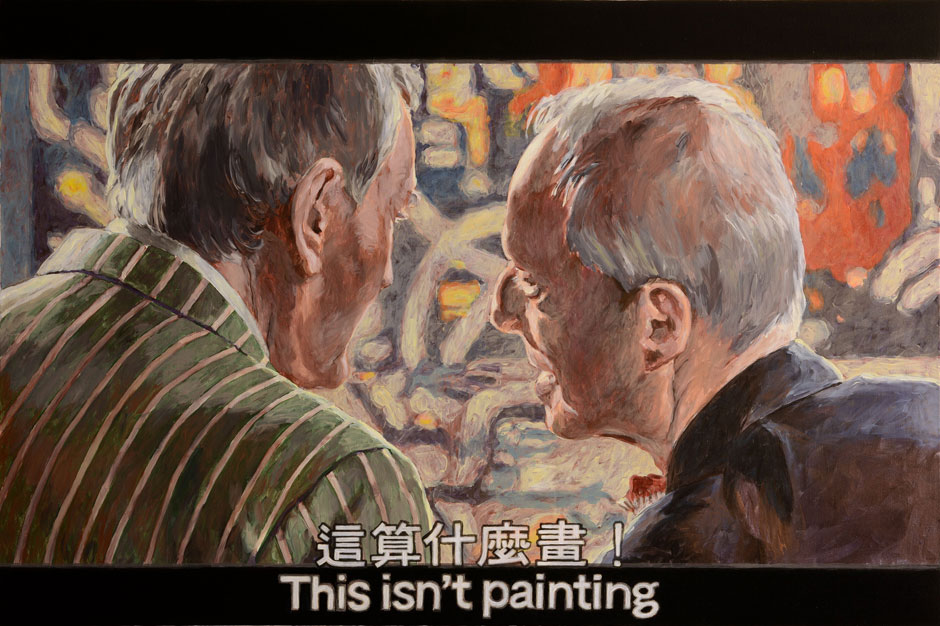 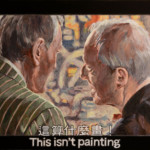 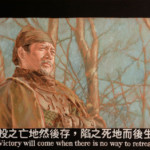 Eli Klein Gallery is delighted to present an unprecedented solo exhibition for Hong Kong-based artist Chow Chun Fai. Chow Chun Fai will feature 19 works, on view for the first time, from Fai’s “Painting on Movies” series. This show will be held in conjunction with Asia Contemporary Art Week.

Fai is one of the many artists influenced by the socio-political turmoil which transpired after the return of Hong Kong, a former British colony, to mainland China in 1997. As past chairman of Fotanian Artist Village in Fo Tan and a member of Factory Artists Concern Group, Fai is one of the few well-known artists in China who is actively engaged in politics.

In the “Painting on Movies” series, Fai perfectly recreates scenes from notable international films and paints English translations as subtitles. Each piece has a unique Hong Kong viewpoint which reveals the continued dilemmas that Hong Kong people face in regard to their identity. Fai’s works exhibit the local culture of Hong Kong, and more specifically the heightened social tensions caused by the socio-political turmoil dating back to 1997.

This exhibition has been developing since 2016. Wishing to take advantage of New York’s highly diverse socio-political environment, Fai shipped all 19 pieces, many unfinished, to the gallery to continue his works. Since then, he has taken residency at the Gallery which has afforded him an unlimited amount of time to complete and draw inspiration for his upcoming exhibition. Fai incorporates enamel industrial paint to create many of these paintings, a technique used to paint old billboards in front of cinemas.

One of his captivating pieces, made with enamel industrial paint, “A Better Tomorrow: We were scolded when we were bad. When we turn to be good we are being tracked,” (2013), illustrates a scene exhibiting a fight between two members of the Mafia. However, one may view this scene as a symbol of the perceived tension between Hong Kong and the mainland. In a time of great economic progress and development, commercial interests have become a growing threat to art and culture. In 2012, Fai further exemplified his devotion to Hong Kong’s political and social environment by running, unsuccessfully, for the cultural post in the Hong Kong Legislative Council, hoping to protect the local arts and culture. In 2014, extensive political demonstrations protesting the nature of the control by the Chinese government shut down parts of central Hong Kong. Fai shows that the “Mafia” has no monopoly over corruption or surveillance. The situation in Hong Kong may well have worsened over time.

One of Fai’s most vibrant works, “Ashes of Time: It is written in the Buddhist Canon. The flag is still. The wind is calm. It is the heart of man that is in turmoil,” (2013), seeks to address the sufferings many individuals face when the pursuit of wealth and economic superiority becomes a country’s dominant goal. This image, inspired by the Zen Buddhist thought, illustrates the calm water as one’s mind, and the invisible wind as the cause of disturbance and turmoil. Fai’s masterpiece moves the audience to see how suffering endures when one seeks materialistic desires. Other brilliantly painted works that Eli Klein Gallery will be presenting are humorous and entertaining, including paintings of scenes from the 1989 “Batman” movie and the 1986 “Transformers” movie, the first cartoons that Fai has ever depicted.

Born in Hong Kong in 1980, Chow Chun Fai graduated with BFA and MFA from the Chinese University of Hong Kong. His recent solo exhibitions include, “Everything comes with an expiry date”, Klein Sun Gallery, New York, NY (2016); “CHOW Chun Fai: I Have Nothing to Say”, Hanart TZ Gallery, Hong Kong (2015); “Cultural Rights-Artist Running An Election”, the Hong Kong University of Science and Technology, Hong Kong (2013).

A fully illustrated digital catalog with an essay by Richard Klein, who is the Bruce K. Gould Distinguished Professor of Law, Touro Law Center, accompanies this exhibition.