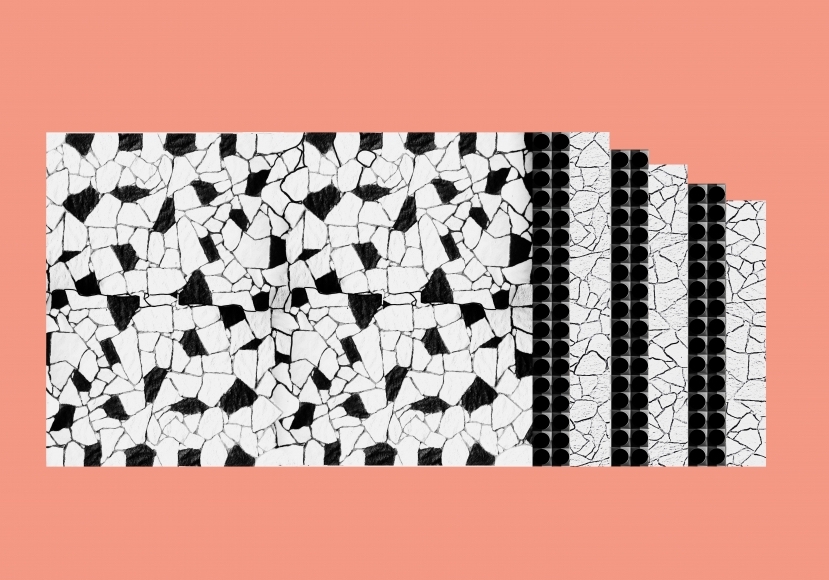 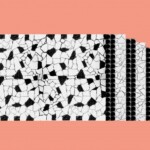 Edra Soto is a Puerto-Rican born multidisciplinary artist who investigates issues of race, class, cultural origins, colonialism, and political power structures, drawing on her own upbringing and relationship to diasporic identity to produce an art that is both highly personal and universally resonate. Through her work, Soto aims to engage with audiences directly and empathetically, often subverting the conventions of art-viewing experience to create larger conversations where viewers might play an active role.

Running along the gallery perimeter is a new iteration of Soto’s ongoing body of work called “GRAFT”, a series of architectural interventions that the artist first started in 2012. “GRAFT” incorporates the distinctive visual motifs of “rejas”, the decorative screens ever-present in mid-twentieth century Puerto Rican domestic architecture. The piece employs a typical “rejas” design of circles and four-pointed stars in a pattern that almost vibrates with rhythm as viewers move through the space. The screen installation also holds over 100 small photographs that document a variety of subjects including vernacular architecture from Puerto Rico, the landscape changes after Hurricane Maria, as well as the artist’s everyday life during her regular visits to the island.

Expanding on many of the ideas present in “GRAFT”, Soto has produced a new series of limited edition digital prints titled “Casas-Islas | Houses-Island”, conceptual drawings inspired by Puerto Rico’s built environment. “Casas-Islas | Houses-Island” specifically considers the idiosyncratic architecture and designs of lower and middle class homes, redeploying those elements into graphic, 2-dimensional schematics. The horizontal shapes floating on colored grounds allude to the topography of the island of Puerto Rico and some notion of the house as a vessel. In this sense, the work becomes a reflection on states of isolation and the idea of homes as topographical spaces that contain private histories. Prompted by the pandemic as well as her own relationship to Puerto Rico, Soto reckons with the physical and physiological demands of quarantining, as well as the new set of procedures that make it more difficult to travel home.

On a table in the middle of the gallery space sits “Remnants | Restos”, a recent collaboration with Dan Sullivan. “Remnants | Restos” is an invented game of strategy and negotiations between two players, and is comprised of wooden building blocks with symmetrical and asymmetrical shapes. The artwork encourages players to affix, detach, stack, or otherwise engage in an almost endless array of possible configurations, provoking moments of friction or concurrence between two parties. Soto and Sullivan created the game block forms by rendering the negative spaces found in the “GRAFT” artwork featured prominently in the gallery. In playing the game, which transforms the blocks into a sort of interactive kinetic sculpture and viewers into practitioners, we might see narratives unfold that hint towards larger ideas about territorial encroachment between nations and cultures. As in all of Soto’s work, in taking part we are inspired to consider difficult questions about our relationship to social hierarchies and the problems of a post-Colonial world, but we also have an opportunity to come together.

Edra Soto is a Puerto-Rican born artist, curator, educator, and co-director of the outdoor project space, The Franklin. Soto has shown her work at a number of prestigious venues including El Museo del Barrio, NY; Crystal Bridges Museum of American Art’s satellite, The Momentary, AK; Albright-Knox Northland, NY; Museum of Contemporary Art of Chicago, IL; Smart Museum, IL; and the Museum of Contemporary Photography, IL. Her upcoming exhibition, “Plaza Pública”, opens June 2021 at the Abrons Arts Center, NY. Recently, Soto completed a large-scale public art commission titled “Screenhouse”, currently on view at Millennium Park in Chicago. The artist has attended residency programs at Skowhegan School of Painting and Sculpture, Beta-Local, the Robert Rauschenberg Foundation Residency, Headlands Center for the Arts, Project Row Houses and Art Omi, among others. Soto was awarded the Efroymson Contemporary Arts Fellowship, the Illinois Arts Council Agency Fellowship, the inaugural Foundwork Artist Prize and the Joan Mitchell Foundation Painters & Sculptors Grant, among others. Between 2019-2020, Soto exhibited and traveled to Brazil, Puerto Rico, and Cuba as part of the MacArthur Foundation’s International Connections Fund. Soto holds an MFA from the School of the Art Institute of Chicago and a bachelor’s degree from Escuela de Artes Plásticas y Diseño de Puerto Rico. The artist lives and works in Chicago.