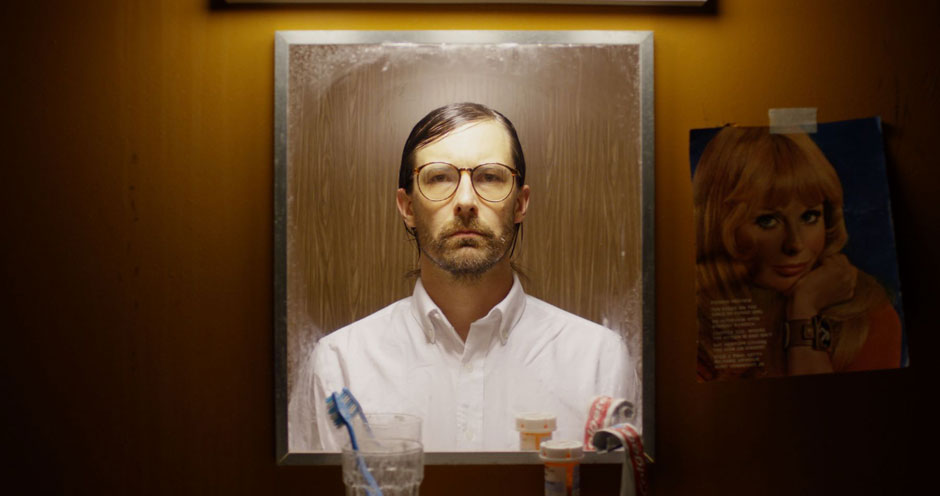 Freight + Volume is pleased to present “QUIETLY, KAREN BLACK”, an exhibition of new videos and printed material by George Jenne. Jenne (b. 1973, Richmond, Virginia) is interested in language, cinematic structure, and the intersection where the two meet and create an alternate syntax. His narrative videos combine imagery and storytelling, supplemented with prints, resulting in an installation expanding, criss-crossing, and exploring the plot even further.

The tile of the exhibition, “QUIETLY, KAREN BLACK”, references Jenne’s longstanding love and fascination with horror films. The exhibition features half a dozen film and video works, including “The Last 200 Feet (roll 1),” which was filmed on the last available 200-foot-rolls of a Kodak motion picture stock that sat abandoned in a Reno, Nevada warehouse until Jenne acquired them. Because of this film stock’s rarity, Jenne states “each roll suggests a unique capability of counting time” and uses his narratives to address aspects of time such as the linearity of film-time and the length of the actual strip of film.

The video “Million Dollar Movie” serves as the source for the lithography prints that will accompany the films. These prints are not stills from the video, but instead images created specifically to expand the film’s story beyond the physical time and space of the installation. Jenne used labor-intensive, traditional offset printing techniques that contrast with the ephemerality of video as a medium.

Another video from the exhibition, “The Gong Farmer,” is an experiment in arranging narrative images. The video reconsiders the Hollywood text scroll, informed by Jenne’s background in movies. In the video, a scroll unveils a written narrative, subverted at the end when the roll is revealed as a common role of toilet paper. As the story evolves, the viewer’s focus is shifted between the mind’s efforts to realize the narrative as a set of concrete images versus what is actually read on the screen.

There are three primary concepts to “QUIETLY, KAREN BLACK”:
1. Cinematic language can be leavened with literary and sculptural language so that a latent image will surface where these disparate mediums converge.
2. Most things that we see as polar opposites, when scrutinized, turn out to be closer to each other than we think.
3. Every gesture in each piece is beholden to the story that it is trying to tell.

As Jenne explains, I have a stinging admiration for the language of stories. But my affection takes the unlikely form of a moving image that supplants cinematic structure, paired with words used with loving irreverence toward the sentence that they inhabit. Apply this to a narrative video, and a story cannibalizes itself then regurgitates something fresh.

Jenne’s background as a movie prop-maker, including as an employee of Jim Henson’s “Creature Shop” in Hollywood, informs his relationship to materials in which “cheap plastic is paramount” and “the faker, the better.” He continued to work as a movie prop-maker in New York while exhibiting at spaces in Manhattan and Brooklyn such as Exit Art, P.S.122, Jack the Pelican Presents and more. He has also exhibited at the Contemporary Art Museum Raleigh, NC, the Nasher Museum at Duke Univeristy, NC, Civilian Art Projects in Washington, DC, and many more. He has been a Creative Capital award finalist and was shortlisted for the Gibbes Museum 1858 Prize, and has done residencies in Provincetown, MA with the Fine Arts Work Center and the DNA Summer Artist Residency program, as well as most recently at the Art OMI residency in Ghent, NY and the Elsewhere Residency in Greensboro, NC. He graduated from the Rhode Island School of Design and has served as adjunct faculty in the film, animation, and video department. He currently lives in Chapel Hill, North Carolina.