Heidi Hahn & Vera Iliatova – Why Must We 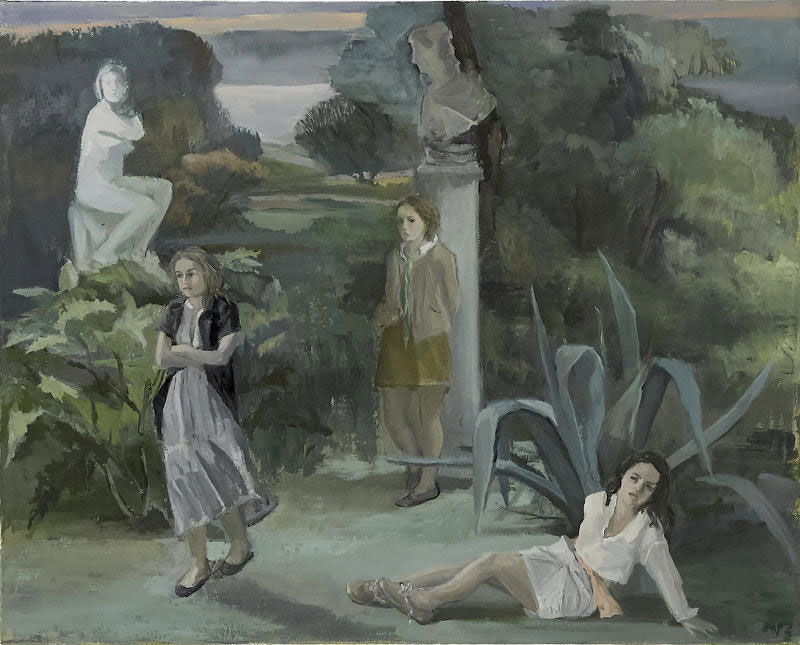 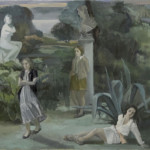 Monya Rowe Gallery is excited to announce a two-person exhibition of paintings featuring Heidi Hahn and Vera Iliatova titled “Why Must We”.

Vera Iliatova continues to use the landscape as a theatrical setting where melodramas unfold between groups of young women. However, for this exhibition, Iliatova’s protagonists are no longer obstructed by still life elements, but are instead presenting themselves to the viewer. Inspired in part by Jean-Antoine Watteau (1684-1721), Iliatova’s nocturnal, or half-light scenes, are set amid unspecified parks and abandoned structures. Gathering on the outskirts, innocent girlhood is explored, but also the rebellious and complicated spirit of youth. The protagonists feel the weight of the past and the uncertainty of the future. The ambiguous dynamics leave the viewer wondering if this cast of characters is arriving or departing, arguing or consoling.

Like Iliatova, Heidi Hahn explores the complicated interior self. For this suite of new paintings, Hahn, whose work is characterized by its vibrant colors and the presence of an anonymous lone figure, explores the quandaries connected with the decision-making process. The characters pensively sit under orange trees abound with fruit. The act of picking fruit is a metaphor for selection, decay and one’s own mortality. The trees, rendered abstractly, also double as thought bubbles floating above the figure’s heads. Although out in nature, near a lake, on a sunny day, these women project a sense of dissatisfaction. An orange is just an arm’s reach away, but unobtainable – do they even want it? It is this existential moodiness that occupies the space of Hahn’s and Iliatova’s paintings.

In bringing Hahn and Iliatova together for this exhibition, one is reminded of Julia Wolkoff’s writing in “Art in America” (May, 2016): “Hahn eschews the usual allure, instead embracing women’s mercurial moods and mental dramas. Her work joins that of peers like Genieve Figgis and Vera Iliatova (as well as that of certain female figurative painters from previous generations, such as Nicole Eisenman, Marlene Dumas, and Florine Stettheimer in combatting art historical tropes with lyrical and complex depictions of women.”

Heidi Hahn (b. 1982, Los Angeles, CA) received a MFA from Yale University, CT and a BFA from Cooper Union, NY. She has been awarded residencies at Skowhegan School of Art, ME; Fine Arts Work Center, Provincetown, MA and the Headlands Center for the Arts, Sausalito, CA. Recent exhibitions include Jack Hanley Gallery, NY; 1969 Gallery, NY; Anton Kern Gallery, NY and Monya Rowe Gallery, NY. Her work is included in the group exhibition titled “Pulse” at the Nerman Museum of Contemporary Art, Overland Park, KS through February 3, 2019. Hahn lives and works in Brooklyn, NY. She is represented by Nathalie Karg Gallery, NY.

Vera Iliatova (b. 1975, St. Petersburg, Russia) received a MFA in Painting/Printmaking from Yale University, CT and a BA from Brandeis University, MA. She has also undergone studies at Sorbonne University, Paris, France and completed a residency at Skowhegan School of Art, ME. Iliatova has recently exhibited her work at the Contemporary Jewish Museum, San Francisco, CA; Tibor de Nagy, NY; Inman Gallery, Houston, TX and Monya Rowe Gallery, NY. Her work is included in the upcoming group exhibition (opening March 2019) at the Katonah Museum of Art, NY titled “Landscape: New Visions of the Landscape From the Early 20th and 21st Centuries” along with April Gornik, Lois Dodd, Shara Hughes, Kerry James Marshall, Helen Torr, Marguerite Zorach and Milton Avery, among others. Her work has been reviewed in The New York Times, Artforum, Art in America, and many others. Iliatova lives and works in Brooklyn, NY.