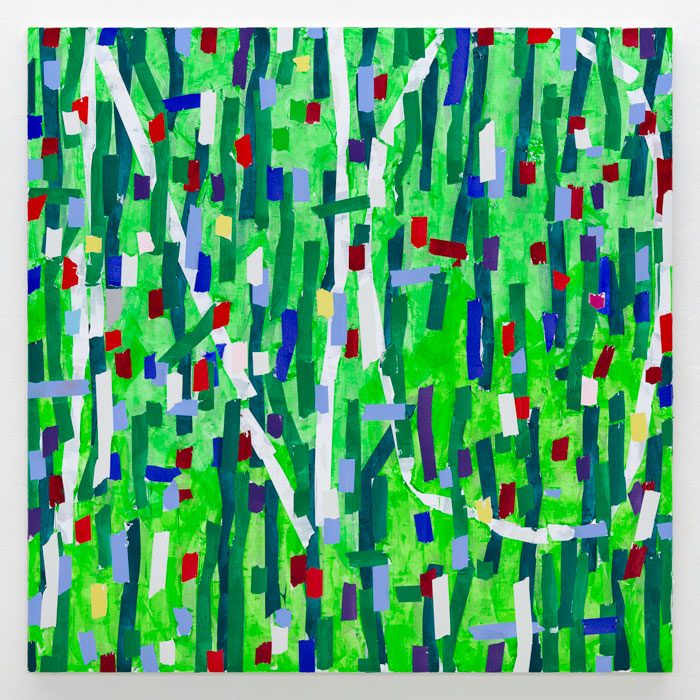 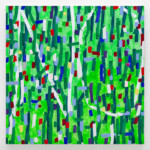 For forty years Zobernig has conducted a thorough re-interpretation of the languages of formalism via an expansive body of work that moves seamlessly between an array of disciplines, from architectural intervention and installation, to performance, film, video, sculpture and painting.

While the artist draws on varied art historical movements, it is an interrogation of modernist tropes and subdivisions – colour theory, the grid, the monochrome, geometric abstraction – that underpins his practice. A critical engagement with the way in which art is framed, both physically and conceptually, is central to Zobernig’s artistic approach, which with its insistent subversion of established twentieth-century motifs and defiance of the confines of any one specific genre, evades easy categorisation.

A commitment to painting anchors Zobernig’s practice. His work in two dimensions is fundamentally absorbed in the history of European abstraction, often exploring the ideologies of artists associated with the refinement of modernist theory. Working within the parameters of a predetermined 200 x 200 cm format, Zobernig deconstructs formal codes surrounding the expressive potential of his medium. Following a visit to a Picasso exhibition at the Kunsthaus Zurich in 2011, the artist relinquished his grip on the grid for a new gestural freedom that continues to play with form, line and colour, expressed with a characteristic irreverence. This self-reflexive approach explores the potential and limitations of painting, at the same time as analysing it within the context of its own display.

In these new works, Zobernig casts his gaze further afield, looking to the ways in which artists have quoted one another for generations upon generations. The series takes as its point of reference Pablo Picasso’s interpretation of Edouard Manet’s “Le Déjeuner sur l’herbe”, which in turn was inspired in part by both Titian’s “Concert champêtre” and “The Judgement of Paris”, an engraving by Marcantonio Raimondi, after Raphael. In Zobernig’s rendition, the abstraction is heightened, and the male and female figures transformed into a complex play of forms. In another work, the artist reconstructs a still life of a flower by Picasso, with the addition of the word ‘NO’ rendered in the image lines; at once an acknowledgement and a negation, encouraging the viewer to perceive an alternative to the perception of nature offered in the original painting. Recurring motifs in several other works refer to landscape paintings by fellow Austrian artist Gustav Klimt, as well as the backgrounds of portraits by Manet.

Heimo Zobernig was born in Austria in 1958, and lives and works in Vienna. He studied at the Academy of Fine Arts, Vienna from 1977-1980, and at the University of Applied Arts, Vienna from 1980-1983. He has exhibited extensively across the world, with major solo exhibitionsmost recentlyat MIT List Visual Arts Center, Cambridge, MA (2017); Malmö Konsthall, Malmö, Sweden (2016); Kunsthaus Bregenz, Bregenz, Austria (2015); Kestnergesellschaft, Hannover, Germany (2014); Mudam Luxembourg, Luxembourg (2014); Museo Nacional Centro de Arte Reina Sofía, Madrid, Spain (2012), which travelled to Kunsthaus Graz, Graz, Austria (2013), Kunsthalle Zürich, Zurich, Switzerland and the Essl Museum, Vienna, Austria (2011); and two related presentations at Fundação Calouste Gulbenkian, Lisbon, Portugal (2009) and Tate St Ives, St Ives, UK (2008). In 2015 Zobernig was chosen to represent Austria at the 56th edition of the Venice Biennale. He has been awarded the the Frederick Kiesler Prize for Architecture and the Arts (2010) and the Roswitha Haftmann Prize (2016). Also in 2016, a catalogue raisonné of his designs of books, posters and catalogues was published by the Malmö Konsthall and Verlag der Buchhandlung Walther König, Cologne.