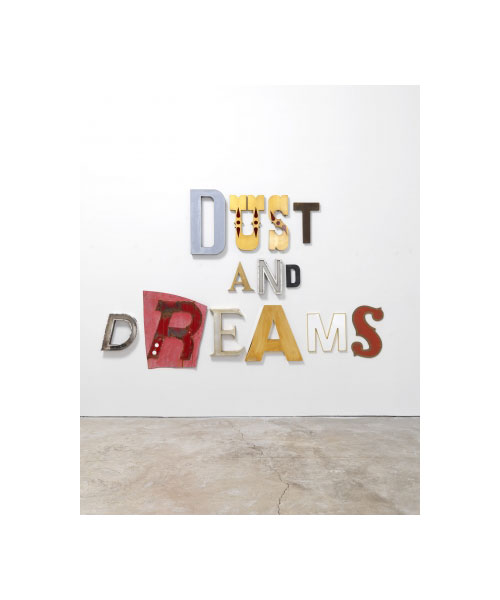 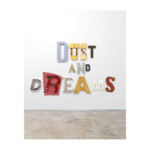 Regen Projects is pleased to announce an exhibition of new work by Jack Pierson. This marks the artist’s ninth solo presentation at the gallery.

For close to three decades, Pierson has created a multi-disciplinary artistic practice that utilizes the visual languages of photography, painting, drawing, and sculpture to examine themes of memory, desire, longing, absence, despair, and glamour.

The exhibition brings together a selection of Pierson’s signature large-scale word sculptures formed from individual found letters salvaged from vintage commercial signage, collected by the artist over the years. The sculptures are comprised of individual letters – each one with a distinct color, surface, texture, shape, and size – placed together to create incantations of emotionally charged words and poetic phrases.

Referencing traditional Americana motifs of roadside signage associated with the American West, within the gallery walls his sculptures like BROKE MISERABLE AND ALONE, DUST AND DREAMS, and MANIFEST DESTINY become decontextualized iconic messages imbued with nostalgia and disillusionment.

Jack Pierson was born in Plymouth, MA in 1960, and earned a B.F.A. at the Massachusetts College of Art in 1984. He lives and works in New York, NY and Wonder Valley, CA.

Pierson gained early recognition for being the youngest founding member of the Five of Boston group, which also included fellow classmates David Armstrong, Philip Lorca di Corca, Nan Goldin, and their friend Mark Morrisroe. Together their explorations in photography defined s a generation of artists who came to prominence in the late 1980s.