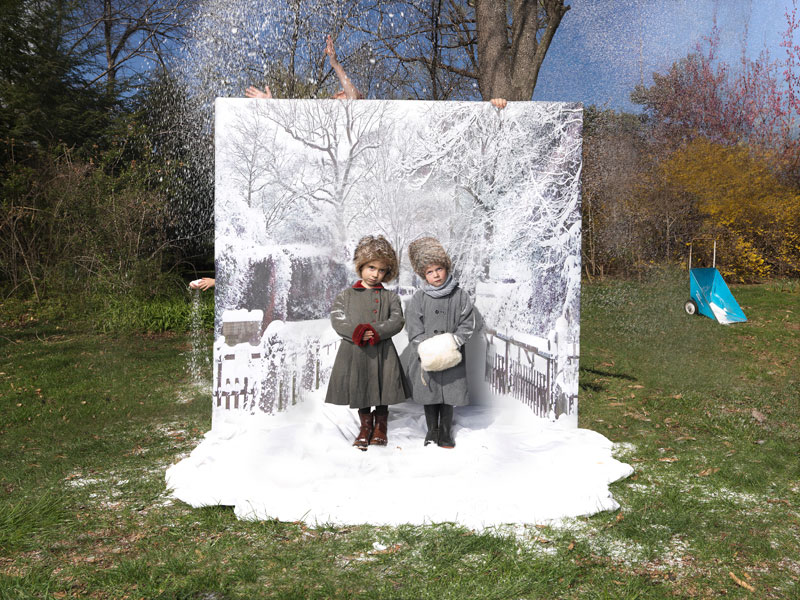 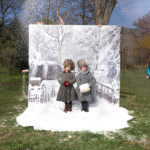 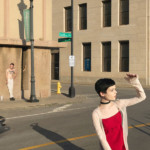 Robert Mann Gallery is pleased to announce “Fake Weather,” debuting new works by Julie Blackmon in her fourth solo show with the gallery. Blackmon’s pictures, said the Los Angeles Times, are “absorbing, meticulously orchestrated slices of ethnographic theater … that abound with tender humor but also shrewdly subtle satire.” Her themes have focused on the social, cultural and familial, but the tumultuous political landscape of the United States and world have challenged Blackmon to turn her eye to the political world for the first time, and the results make an impact.

“When I began taking pictures,” Blackmon says, “I was primarily interested in documenting the lives of my five sisters and myself as we raised families in the Ozarks in the 21st century. My goal was to capture the mythical in the ordinary, and I gradually began introducing narrative strands into the photos, hoping to create visual fables that reflected deeper truths. I wanted to explore and critique the way we live today, so there have always been snakes lurking in the backyard gardens of my imagination – someone once told me that my work was one part Norman Rockwell and one part Norman Bates.”

Blackmon’s latest works retain her signature combination of compelling visual allure and subtly off-kilter incidents – in some cases with a more serious edge, as the artist probes the fever dreams of a restless nation. Still hewing to her deliberately restricted, yet ever expressive, palette of subjects – jungle-gym jealousies, yard-sale intrigues and sibling smackdowns – Blackmon finds ample room to explore political developments. The title piece of the exhibition, “Fake Weather,” provokes an immediate laugh with its portrait of two reluctant, exacerbated subjects. But it also comments on the nation’s temperature – as both its climate and politics heat up – and responds to a time in which obvious realities are described as false. Finally, with a sly wink at the audience, the artist reveals the backstage mechanisms that give shape to her visions.

Julie Blackmon lives and works in Springfield, Missouri. The artist’s work is included in numerous museums and public collections including that of the George Eastman House; Nelson Atkins Museum of Art; Museum of Fine Arts, Houston; Kemper Museum of Contemporary Art, Kansas City; the Portland Art Museum; and the Musée Français de la Photographie in Bièvres, France. She was named American Photo’s “Emerging Photographer of 2008” and one of PDN’s “30 New and Emerging Photographers” in 2007, and has been the recipient of various awards including first prize from The Santa Fe Center for Photography in the Project Competition in 2006. Blackmon has published two monographs, her first of which sold out, “Domestic Vacations” (Radius Press, 2008) and “Homegrown” (Radius Press co-published with Robert Mann Gallery, 2014).