Lia Halloran – Your Body is a Space That Sees 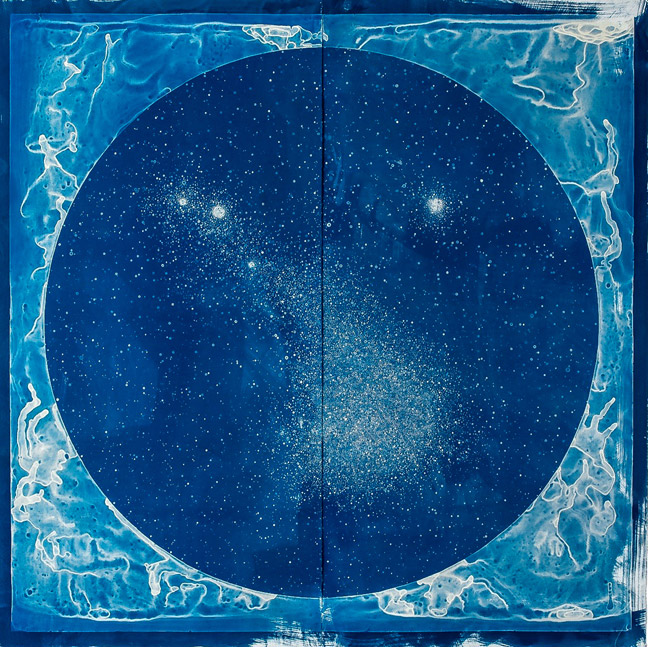 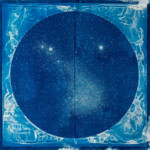 Luis De Jesus Los Angeles is very pleased to present “Your Body is a Space That Sees” an exhibition of cyanotype works by Lia Halloran.

“Your Body is a Space That Sees” is a series of large-scale cyanotype works that source the history and discoveries of a group of women known as “Pickering’s Harem”, or later the “Harvard Computers”, who worked at the Harvard Observatory starting in the late 1800s through the first half of the 20th century. This group made significant impacts in the field of astronomy by using photographic glass plates to establish classification systems for the size, brightness and chemical content of stars.

Their contributions to the lineage of astronomy were impactful, yet they were largely excluded from its common history. The series offers the experience of a female-centric catalog of stellar objects in immersive cyan blue and illuminates visually the curiosity and richness of the night sky through depictions of craters, comets, galaxies and nebula.

Lia Halloran’s research for this series was done in partnership with the Harvard University Archive, which houses the world’s largest collection of historic astronomical photographic plates. The artist identified specific plates used by these women and utilized them as a reference for her large paintings. Halloran pays tribute to these women by including their names and their discoveries in the titles of the works.

Among the impactful findings referenced in this body of work are the discovery by Henrietta Swan Levitt of providing the key to unlocking the distance of the universe’ instrumental to the now famous theory and discoveries by Edwin Hubble that the universe is expanding; Cecilia Payne, who found that a vast majority of the universe consisted of hydrogen; and Annie Jump Cannon who established the classification system of stars still used today “OBAFGKM” known under the famous mnemonic “Oh Be A Fine Girl, Kiss Me”.

Halloran’s cyanotypes are created through a process that employs painting and printing, using photographic methods. Paintings of stellar objects referenced from photographic plates are made on semi-transparent film and then laid over paper that has been coated with light sensitive emulsion and exposed under direct sunlight. The resulting work is a cyanotype print of the positive image in equal scale to its matching negative: a photographic print created without the utilization of a camera.

This process mimics how early astronomical glass plates were created and is multi-layered in meaning and technique: images of stars created by a star (our sun); paintings used to create a painting (light sensitive emulsion painted out and exposed by another painting). Halloran’s technique is similar to Cliché Verre, a process used by French painters such as Camille Carot, Jean-Francois Millet and Charles-Francois Daubigny in the early 19th century as a method of making a photograph by painting on glass as the negative.

“Your Body is A Space That Sees” is supported by an Art Works for Visual Arts Grant from the National Endowment for the Arts.

Lia Halloran (born Chicago, 1977) grew up surfing and skateboarding in the Bay Area and developed a love of science while in high school, during her first job at the Exploratorium in San Francisco. Her studio practice has been in dialogue with science and nature for the past fifteen years and is the primary mediator between subject matter. Halloran’s work often makes use of scientific concepts as a starting point that interweave ideas about sexuality, intimacy and physical movement to produce merged projects that have included astrophysics, magnetism, perception, scale, gravity, giant caves of crystals and ice, cabinets of curiosities, taxonomy, classification, periodic table of elements, skateboarding, and interconnections within the above.

Halloran has participated in several interdisciplinary projects and collaborations to curate exhibitions, produce critical dialogues on contemporary art, and create work that explores connections in science and art, including an upcoming book with Professor Kip Thorne about the “warped side of the universe”. Her series “Deep Sky Companion”, which reinterprets the 18th century French comet hunter Charles Messier’s “Catalogue of Deep Sky Objects” in 110 paintings and 110 photographic twins, is on permanent display at the Cahill Center for Astronomy and Astrophysics at Caltech in Pasadena.

Lia Halloran received her BFA from the University of California, Los Angeles, and her MFA in Painting and Printmaking from Yale University. She is Professor at Chapman University, and lives and works in Los Angeles.