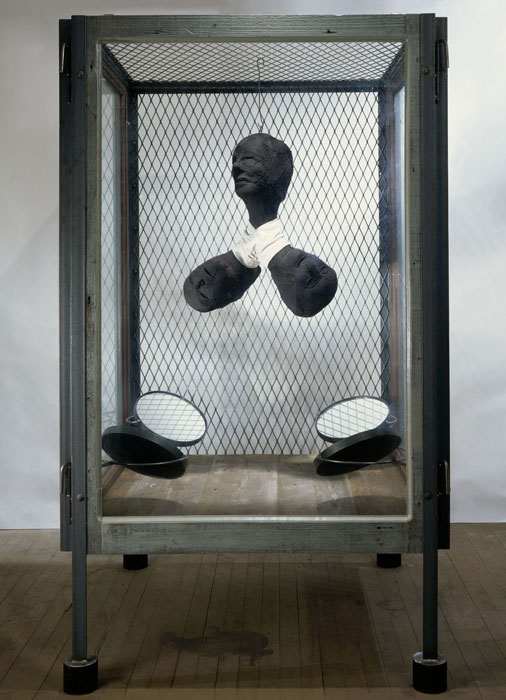 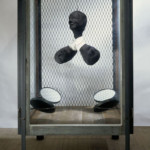 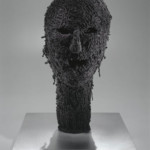 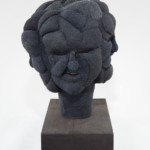 Hauser & Wirth inaugurates its St. Moritz gallery with “Papillons Noirs”, an exhibition of works by renowned French-American artist Louise Bourgeois (1911 – 2010). The exhibition spans two floors of the gallery space on Via Serlas facing the Palace Hotel, where Hauser & Wirth has made its home.

Comprising a selection of works from the last decade of Bourgeois’s life, “Papillons Noirs” includes a series of black fabric heads alongside late experimental works on paper that belong to the artist’s collection. The fabric heads were created roughly between the years of 2000 and 2003, when Bourgeois was in her late eighties and early nineties. The title of the exhibition, “Papillons Noirs”, is drawn from one of Bourgeois’s ‘psychoanalytic writings’, a group of texts written while she was undergoing intensive psychoanalysis. Penned on a loose sheet of paper dated 31 January 1966, the phrase is an old French metaphor for melancholic thoughts, and references her depression and anxiety. She often referred to colour as representative of emotional states; for her, black was symbolic of mourning, despair, regret and guilt.

Bourgeois layered hand-sewn scraps of black terry cloth, tapestry, and fragments of her own clothing to form the features of her fabric heads. In these works, she reveals a deep identification with her mother, who died when Bourgeois was twenty years old. Her mother and maternal grandparents originated from the French town of Aubusson, famed for its textile industry, and her mother ran a tapestry restoration workshop – thus, Bourgeois came to associate sewing with the act of reparation: ‘I’ve always had a fascination with the needle, the magic power of the needle. The needle is used to repair the damage. It’s a claim to forgiveness’. Employing familial techniques from her childhood, Bourgeois confronted her past literally and metaphorically, stitching together scraps of old fabric to gain a semblance of understanding and reconciliation. For her, art was inextricably entwined with personal experience – it was a channel through which she explored the depths of her emotions. In her art-making, Bourgeois fused the intensity of the moment with memories of events and people from her past.

Beginning in 1991 Bourgeois began employing the “Cell” as an archetypal structure, which she described as ‘environmental sculpture’, to represent themes of trauma, memory, and architecture. She played on the linguistic meaning of ‘cell’ to reference the biological unit that constitutes the body, as well as the idea of isolation or imprisonment. The “Cells” on view here comprise a distinctive subgroup of the series, called ‘Portrait Cells.’ They are composed of steel mesh, glass, and wood, with the black fabric heads either sitting at the base or suspended from above. In ‘Cell XXIV (Portrait)’ (2001) three heads, each with two faces, are bound together at the neck and hang from the top of the mesh enclosure. Adjustable mirrors are situated at the base of the vitrine, further multiplying the heads and their double faces in the reflected space.

Bourgeois was not concerned with traditional portraiture or an image of any one individual, but instead with the effect that the individual can have on another, and the emotional dynamic played out by the encounter with the other. With her fabric heads, she explores a range of psychological expressions and complex emotional states – love, sexuality, suffering, and death – through the heads’ features and the ways in which they have been constructed and sewn. The maternal, feminine, and familial aspects of fabric provide a sense of tenderness. With these deeply intimate forms, Bourgeois revealed many facets of the human experience, and conceived a beautifully haunting language that extends far beyond her life.

“Papillons Noirs” is curated by Jerry Gorovoy, who worked closely with Bourgeois from the early 1980s until her death in 2010.

Born in France in 1911, and working in America from 1938 until her death in 2010, Louise Bourgeois is recognized as one of the most important and influential artists of the twentieth century. For over seven decades, Bourgeois’s creative process was fueled by an introspective reality, often rooted in cathartic re-visitations of early childhood trauma and frank examinations of female sexuality. Articulated by recurrent motifs (including body parts, houses and spiders), personal symbolism and psychological release, the conceptual and stylistic complexity of Bourgeois’s oeuvre – employing a variety of genres, media and materials – plays upon the powers of association, memory, fantasy, and fear.