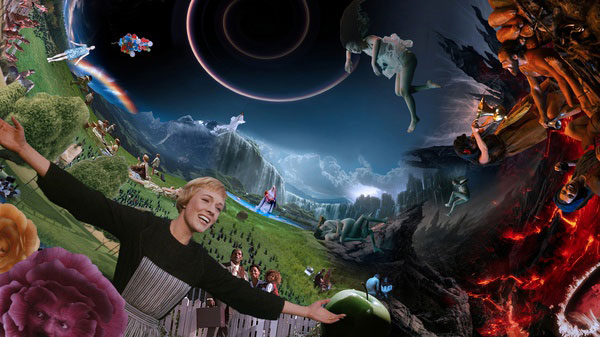 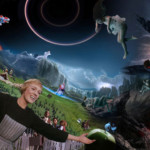 Using collage as the point of departure, Brambilla explicates the medium, not only juxtaposing imagery but also superimposing looping visuals onto one another and setting cuts from various films into each other to create compelling new narratives. Many nuanced motifs are enveloped into the overall anecdote, much like the parabolic style of Northern Renaissance painter Hieronymus Bosch who layered fables and proverbs as detailed notes within the master tale. “Creation (Megaplex)” addresses the language and mythologies of Hollywood, exploring the idea of spectacle versus content. Set to the jubilantly haunting score of Sergei Prokofiev’s “Cinderella Waltz”, the film comments on our dislocated interpretations and obsession with media. The digitally assembled images generate a hyper-realistic landscape of clouds, meadows and burning cityscapes, against which humanity reels between a frenzied production and consumption of its own creation. With each cycle of the work, “Megaplex” engulfs the viewer in an overload of imagery almost impossible to sustain.

The most technically complex of the trilogy, Brambilla tests visual limits and utilizes cutting-edge digital science in “Creation (Megaplex)”. Within the gallery space theatrically articulated with red curtains, Brambilla offers an engrossing examination of consumerism and the excesses of our era. The artist both celebrates and satirises the Hollywood blockbuster and our cultural landscape with a provocative visual narrative that produces an endless, repeating stream of epic film clips and grandiose characters from every genre, reflecting the disposability of the images and the absorption of it into our collective consciousness.

Marco Brambilla (b. 1960) is an artist based in New York and Berlin. He is primarily known for his elaborate re-contextualisations of found imagery, often employing new technologies in his work. He has pioneered the use of 3D technology in video art with his “Megaplex” trilogy, LiDAR computer-mapping for Anthropocene (a public art installation in New York City), as well as elaborate computer simulations of an Apollo launch, presented on 54 screens in Times Square (2015). Brambilla’s work has been internationally exhibited and is in the collections of the Guggenheim Museum; San Francisco Museum of Modern Art; ARCO Foundation, Madrid; Borusan Contemporary, Istanbul and the Corcoran Gallery of Art, Washington D.C.

A recipient of the Tiffany Comfort Foundation and Tiffany Colbert Foundation awards, Brambilla has also worked with luxury brands for which he has created large scale video installations. His work has been featured at the 2011 Venice Film Festival and 2012 Sundance Film Festival, as well as a screening of the “Megaplex” trilogy at Fondation Beyeler in Basel, Switzerland.