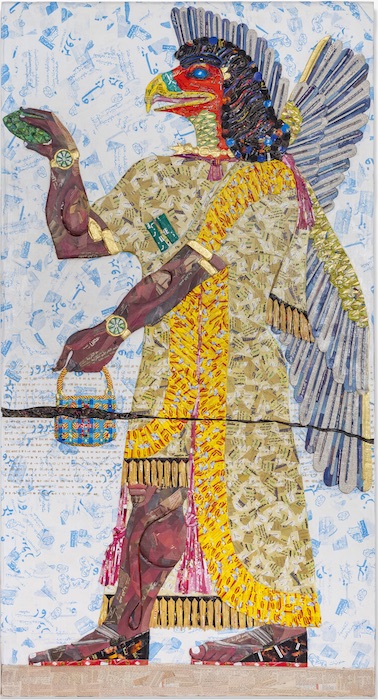 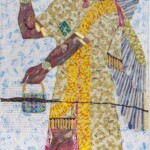 Rakowitz’s ongoing project, “The invisible enemy should not exist”, was first shown in 2007 at the former Lombard-Freid Gallery. For the initial iteration, Rakowitz merged data from the University of Chicago’s Oriental Institute, UCLA, and Interpol, to recreate artifacts that were destroyed or looted from the National Museum of Iraq following the 2003 US invasion, crafted out of Middle Eastern food packaging, Arabic newspapers, and other found media. Rakowitz’s reliefs from the Palace of Nimrud continue to inspire conversations about colonialism, preservation, and the culturcide of a civilization.

For this exhibition, Rakowitz presents reliefs from “Room F,” a banquet courtyard within King Ashurnasirpal II’s 9th century BC palace built in Kalhu, the ancient Assyrian city of Nimrud. By the time the palace was destroyed by ISIS in 2015, 400 of the 600 gypsum reliefs that once lined the walls had been removed by archeologists during expeditions and sent to museums in the West. In each iteration of “The invisible enemy should not exist”, Rakowitz and his studio team reappear the destroyed reliefs and replicate the architectural layout of the original rooms in which the panels were installed. The gaps between the reliefs reflect pieces that were extracted by the excavators, acknowledging the continued history of displacement in Iraq, creating what the artist calls a palimpsest of different moments of remova.
“The Ballad of Special Ops Cody” is on view alongside the reliefs. The stop-motion animation film centers around the unbelievable true story of an Iraqi insurgent group’s attempt to convince Americans that they had taken a soldier hostage. In 2005, photographs of the alleged captive held by gunpoint surfaced. The “hostage,” instead of being a captured soldier, was actually “Special Ops Cody”, a popular plastic doll sold on military bases. In the film, Rakowitz brings the action figure to life voiced by a veteran of the Iraq war. Cody is on a mission to liberate votive statues from their vitrines, but afraid and unsure they remained in the Oriental Institute where they lived on display. Rakowitz implores us to examine and honor these treasures while contemplating the human and cultural costs of the captive works we now see in museums.

Michael Rakowitz is an artist living and working in Chicago. His work has appeared in venues worldwide including dOCUMENTA (13), P.S.1, MoMA, Mass MOCA, Castello di Rivoli, the 16th Biennale of Sydney, the 10th and 14th Istanbul Biennials, Sharjah Biennial 8, Tirana Biennale, National Design Triennial at the Cooper-Hewitt, and Transmediale 05. He has had solo projects and exhibitions with Creative Time, Tate Modern in London, MCA Chicago, Lombard Freid Gallery in New York, and Kunstraum Innsbruck. He is the recipient of the 2018 Herb Alpert Award in the Arts; a 2012 Tiffany Foundation Award; a 2008 Creative Capital Grant; a Sharjah Biennial Jury Award; a 2006 New York Foundation for the Arts Fellowship Grant in Architecture and Environmental Structures; the 2003 Dena Foundation Award, and the 2002 Design 21 Grand Prix from UNESCO. He was awarded the Fourth Plinth commission in London’s Trafalgar Square, on view through 2020. A traveling survey of his work premiered at the Whitechapel Gallery in London in June 2019, and is currently on view at the Castello di Rivoli Museo d’Arte Contemporanea in Torino, Italy. It will travel to the Jameel Art Centre in Dubai in 2020. Rakowitz was recently named the 2020 Nasher Sculpture Prize Laureate and is Professor of Art Theory and Practice at Northwestern University.