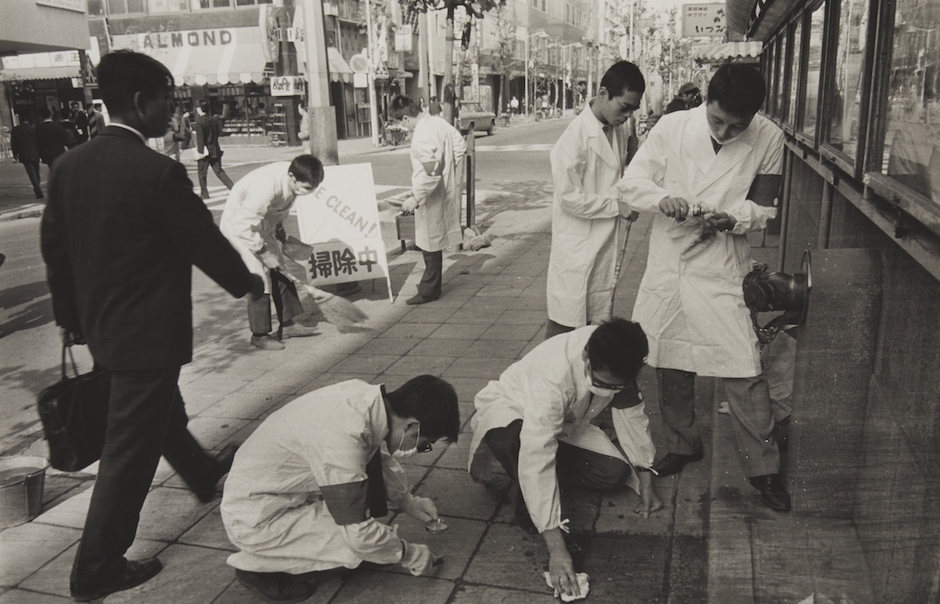 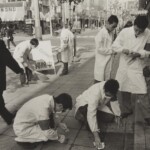 Taka Ishii Gallery Photography / Film is pleased to present “Action: Vintages from the 1960s”, an exhibition of the work of Minoru Hirata. This exhibition marks Hirata’s third solo exhibition with the gallery and features 11 vintage prints from among his vast trove of photographs documenting the activities of avant-garde artists in the 1960s.

Starting in the early 1960s the Japanese art world saw many young artists, including those affiliated with the Fluxus movement originating in the West, engage in avant-garde activities such as performances and happenings that deviated from established artistic genres. Photography played a vital role in validating these one-time, performative actions, not necessarily conceived with documentation in mind, as works of art. While these artistic practices positively incorporated chance and ephemerality, photographers focused on ways of framing specific moments and generating creative sympathies between photographer and subject, and the avant-garde actions became lasting works of art through the medium of photography.

Around 1960 Minoru Hirata was working as a freelance photojournalist, and after shooting Ushio Shinohara’s “Boxing Paintings” for the Tokyo bureau of the US-based NANA (North American Newspaper Alliance), he began to engage with the contemporary art scene. He subsequently forged ties with Sho Kazakura and other young emerging artists such as Yasunao Tone, Jiro Takamatsu, Genpei Akasegawa, Natsuyuki Nakanishi, and Yoko Ono. Fascinated by the innovative works they were prolifically producing, Hirata captured their actions in photographs that are works of art in their own right.

Hirata not only photographed their performances, but also used his position as a photojournalist to introduce them in print media in the form of photo essays, sometimes writing the accompanying texts himself. Documenting the scenes he witnessed and writing articles about them enabled these transitory actions, only seen by viewers who happened to be on-site, to reach a broader audience, and served to promote the artists and their work. Hirata’s photographs are the only existing record of many of these performances, and they go beyond mere documentation and exert their own distinctive magnetism as works of art. In this exhibition, we present his photographs of performances by Akiyama Yūtokutaishi and the groups Collective Kumo, Zero Dimension, Hi Red Center, and the Expo ’70 Destruction Joint-Struggle Group.

Minoru Hirata was born 1930 in Tokyo and passed in 2018. After working as a stenographer in the Diet, he independently began studying photography. In 1953, debuted as a photographer with the publication of his works in Asahi Camera Extra Edition International Photography Salon and began working as a freelance photojournalist. Between the 1950s and 1970s, he documented Tokyo and its inhabitants, landscapes, and social realities as they moved from the postwar period to the era of rapid economic growth.

In the 1960s, his photographs, which captured avant-garde artists such as Yoko Ono, Genpei Akasegawa, Ushio Shinohara, Hi Red Center, and Zero Jigen, were widely published in weekly magazines. Hirata’s consistent approach and subjective shooting of subjects and events also resulted other works such as the Okinawa series, shot between the late 1960s and early 1970s, and his journalistic photographs of sky sports.

Taka Ishii Gallery Photography / Film will be closed from Wednesday, May 12 until Monday, May 31, in response to the state of emergency declared by the government.