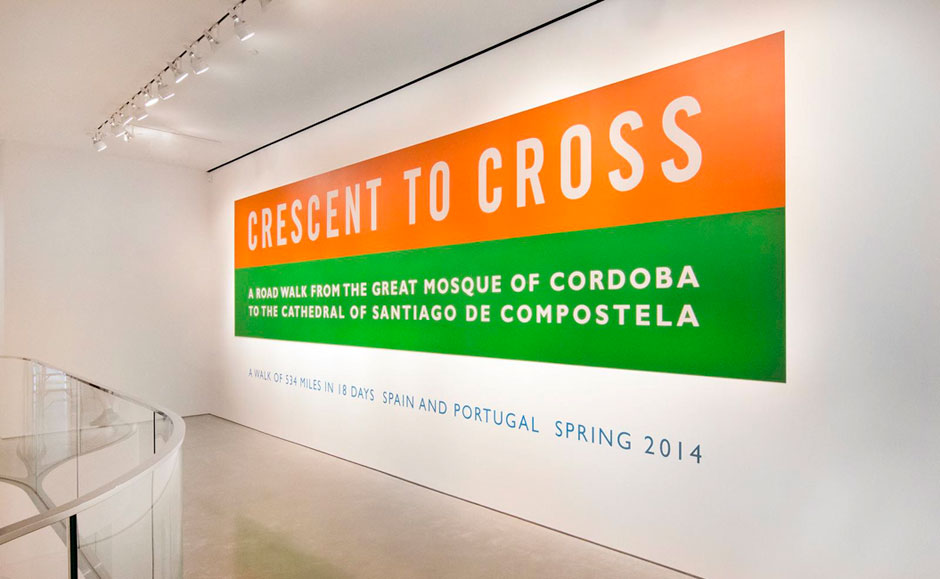 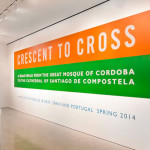 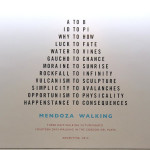 Sperone Westwater is pleased to announce an exhibition of new work by Richard Long, “Crescent to Cross,” the artist’s fifteenth solo show with the gallery since his first in 1978. Over the course of his career, Long has radically redefined the traditional conventions of sculpture using nature as both subject and medium.

The show takes its title from “Crescent to Cross” (2014), a text work describing a walk the artist undertook last year from the Great Mosque of Córdoba in Andalusia to the Cathedral of Santiago de Compostela, a major Catholic landmark in northern Spain. Since the 1960s, Long has made works that originate in carefully planned walks inscribing physical or metaphorical marks into the landscape. As Long explains: “Early on, I realized the world outside the studio was more interesting than what was going on inside. People have been making impressions in the earth for thousands of years – in general my work takes its place amongst many other man-made marks.”

A large-scale mud work will dominate the main gallery’s double-height wall, on which the artist will apply red clay mud directly by hand. The work is an index of the intensely physical act of its making. While it possesses an archaic quality, the work’s site-specific installation in the gallery underscores its spontaneous creation, calling attention to the artist’s human scale and the passage of time.

A sculpture of craggy red slate native to upstate New York will occupy the gallery’s third floor. This simple geometric arrangement emphasizes the tension between conceptual structure and organic material, with its strong connections to place and origin. In its displacement from the natural world to the gallery, the work becomes a landscape in its own right.

Photographic works of Long’s sculpture in the landscape include “Aconcagua Circle” (2012), a stone circle the artist made in the Andes beneath Aconcagua, the highest mountain in the Americas. Long created his first stone circle in the Andes in 1972, the same year he participated in Harald Szeemann’s legendary Documenta 5. Such works document the artist’s traces in nature even as the arrangements themselves are given up to the elements.

Long’s text and photographic pieces demarcate space as much as his physical sculpture. The artist’s text works serve to extend the solitary experience of his walks, often recording a diary of phenomena. Unlike purely conceptual artworks which may exist as ideas or proposals, Long’s texts remain focused on the artist’s physical passage through the landscape – in the artist’s words, on “real stones, real time, real actions.”

Richard Long was born in Bristol, England, where he lives and works. He graduated from St. Martin’s School of Art, London. He has had over 250 solo exhibitions to date, including shows at the Solomon R. Guggenheim Museum (1986); Hayward Gallery (1991); Musée d’art moderne de la ville de Paris (1993); San Francisco Museum of Modern Art (2006); Scottish National Gallery of Modern Art (2007); and Tate Britain (2009). Long represented Great Britain in the 37th Venice Biennale in 1976, was awarded the Turner Prize in 1989, and received the Praemium Imperiale Art Award in 2009. He was made a Commander of the Order of the British Empire in 2013. On view concurrently at the Arnolfini in Bristol is the major solo show “Richard Long: Time and Space,” closing 15 November.