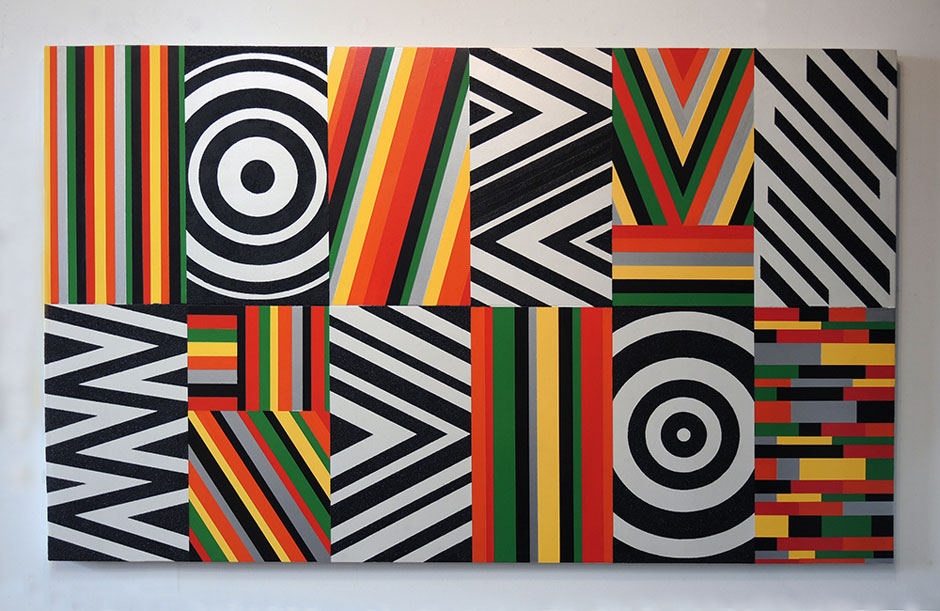 Robustly chromatic, visually potent, at times compositionally labyrinthine and physically imposing, Rico Gatson’s mixed-media paintings, sculptures and collage-centric drawings are always, thanks in part to their carefully honed economy of forms and means, declarative, assertive and indelible – and unmistakably, unwaveringly his. On levels aesthetic and conceptual alike, Gatson does not imbue, but rather inundates his works with definitive, invariable force, executing them with just enough colorful vibrancy, linear keenness and mystical curiosity as to allow his viewers to almost – yet only almost, and this is crucial – miss or overlook their certainly important, equally cogent, subtly layered, variably strident socio-political content.

All of this has been true of Gatson’s work for quite a while, but it is now much more so in the new series of mixed-media pieces he has produced for “Power Lines”, a solo exhibition at Samsøñ. The artist’s characteristic palette of patently Africana-associative chromatics – bright reds, greens and goldish yellows often framed, interrupted by or sectioned off with swaths of deeply flat or slightly lustrous blacks, all arranged in variable abstractions that might even, at times, feature embedded texts – has become bolder, brighter, richer and punchier than ever, and thicker sections of color and black alike make his compositions register as weightier, more declarative, somehow exigent. Some pieces, however, especially a fresh new series of small panels, as well as certain tall, lean-to like sculptural works, “Panel Paintings”, evidence Gatson taking a bit further his recent explorations of chromatic switchings – transposing the complementary balancing he usually achieves via reds and greens with value-like harmonies via purples and greys, maintaining his lush warm yellow to keep the violets at bay. (“Radiantly Provocative: Rico Gatson’s Power Lines” by Paul D’Agostino)