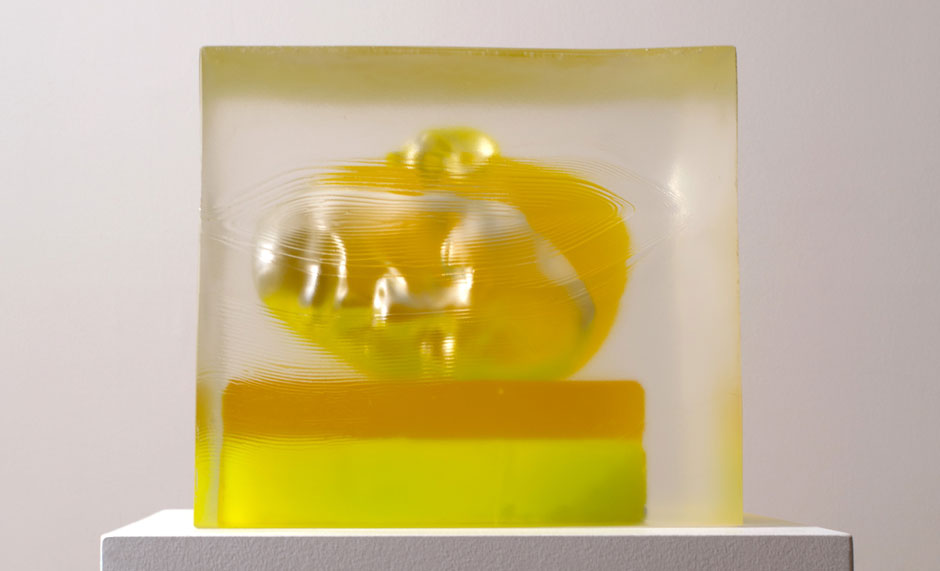 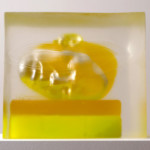 Marc Straus is pleased to present our inaugural solo exhibition of Rona Pondick, featuring a new body of work five years in the making.

Pondick’s new works feature semi-transparent clear blocks encasing her head rendered in brilliant contrasting color. The heads appear in various orientations, sometimes even floating partway out of their evanescent domain. The blocks have subtle contours and worked edges, paying fealty to the sculptor’s hand. They are made from resin, acrylic and an epoxy modeling compound; new materials for Pondick who experimented endlessly to achieve a harmony of form, color, and emotional depth. One indelible quality of the new work is the use of sonorous color. Each work features a dominant hue and no more than four different colors, for which the work is titled. These are intimate and yet powerful works that shift with our positioning.

In the floor pieces, Pondick’s head is atop a small body-like form. In “Curly Grey” (2016-2018) a head with texture so much like skin, rests upon a mass that looks as if it is made of jumbled packing peanuts. Below, two forms, perhaps feet, stick out cheekily as though this figure is struggling to get up. From the tilt of “Sitting Yellow” (2013-2018), one asks the question is the figure resting or incapacitated? The authority of these sculptures very much resides in our apprehension of their psychological dynamics our own fears, hopes, and history become poignant.

Since 1984, Pondick’s oeuvre has gone through almost distinct phases throughout her illustrious career. From the late 80’s to early 90’s, her well-known work included baby bottles with nipples, and small spheres with rubber teeth. Then in 2002 new stainless-steel works appeared which were much more formal – her head annealed to a stainless steel body of a cougar or suspended from stainless steel tree branches. What remains common in her career are self-referential themes and work long in the making, requiring significant experimentation and production. In this new work Pondick’s extraordinary craftmanship and ground-breaking use of materials are present but what is most consequential is their heart-wrenching power. These are works of grace, of truth, that do not ask for sympathy.

In 2006, Rona Pondick was diagnosed with cervical spondylotic myelopathy, and endured severe surgeries and treatment to regain the control of her body, mainly her hands. Her recovery was hard-won but she has persistent pain. Pondick elegiacally captures her own fragility and limits; but also implicit is the wondrousness of life, of the artist living at full volume, doing what she loves.

Rona Pondick (b. 1952, Brooklyn, New York) has had over 45 solo exhibitions of her work in museums and galleries internationally, and her sculptures have been included in over 45 solo and 200 group exhibitions, including numerous biennales worldwide: the Whitney Biennial, Lyon Biennale, Johannesburg Biennale, Sonsbeek, and Venice Biennale. Her work is in the collections of many institutions worldwide including the Whitney Museum of American Art (New York); The Metropolitan Museum of Art (New York); The Morgan Library & Museum (New York); Brooklyn Museum of Art, Philadelphia Museum of Art, Los Angeles County Museum of Art; Museum of Contemporary Art (Los Angeles); Yale University Art Gallery (New Haven); Nasher Sculpture Center (Dallas); Israel Museum (Jerusalem), and Centre Pompidou (Paris).

The exhibition is accompanied by a fully illustrated catalogue with an essay by Lynn Zelevansky.