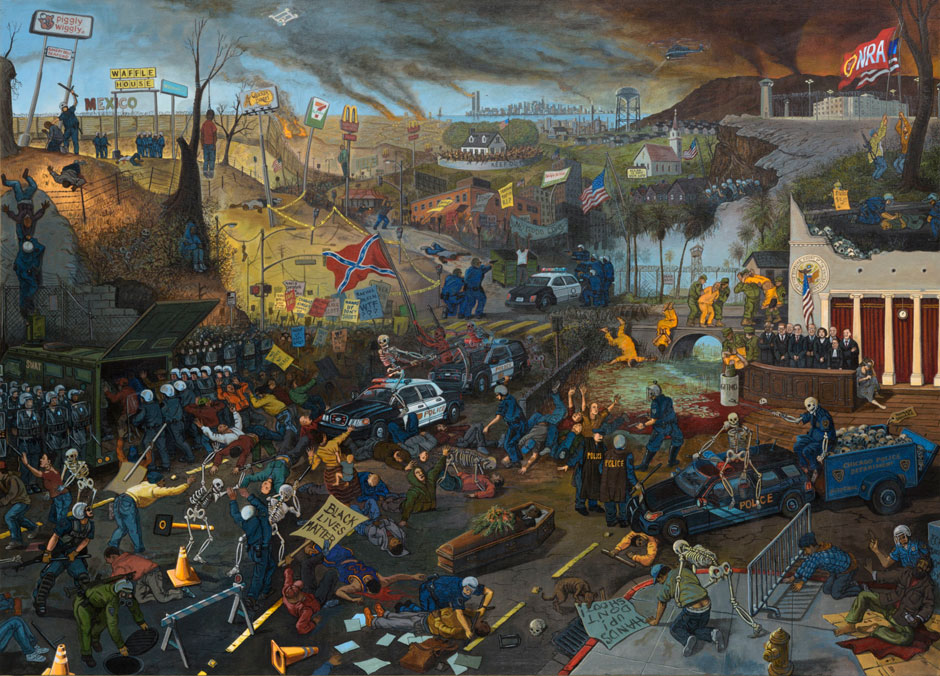 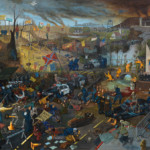 P.P.O.W is pleased to present “Triumph of Hate”, the gallery’s fourth exhibition with Sandow Birk, featuring new paintings, woodblock prints, and lithographs. Birk is best known for his politically-minded work that presents contemporary takes on history paintings and historic texts. While he creates works in a variety of media and scales, Birk unites his practice through social commentary. The presentation in “Triumph of Hate” illuminates injustices and inspires empathy in today’s political landscape, and continues the artist’s investigation of using traditional practices to offer a new perspective on contemporary events.

The exhibition marks a return to painting for Birk, who has primarily focused on creating large-scale drawings in recent years. These chaotic scenes depict recent events in American culture. Populated with crowds, they are not immediately legible. Upon further scrutiny, however, it becomes clear that the subtle political thread running through the series reveals sinister or tragic events in contemporary life. The subjects of these paintings include the 2017 school shooting at Stoneman Douglas High School in Parkland, Florida; the 2017 mass shooting at the Route 91 Harvest Festival in Las Vegas; and the white supremacists’ march in Charlottesville, Virginia; among other events.

“The Horrible & Terrible Deeds & Words of the Very Renowned Trumpagruel” is a series of prints made while Birk was Artist-in-Residence at Auckland Print Studio in New Zealand in June and July of 2017. The works feature a caricatured, larger-than-life President Trump, focused on his phone, surrounded by manipulating political allies in various moments of victory and defeat. “Triumph of Hate” will include eleven of these lithograph prints. Birk was inspired to create the project by the books “Gargantua and Pantagruel”, written by François Rabelais in the sixteenth century about the adventures of two bumbling giants.This project marks Birk’s first venture into stone lithography, made in collaboration with master printer John Pusateri in Auckland. Created in the aftermath of the 2017 U.S. Presidential inauguration, the immediacy and spontaneity of the medium allowed Birk to quickly capture his feelings of anger and sadness in the days following the event.

“Triumph of Hate” also features Birk’s “American Procession”, the largest work he has created to date. “American Procession” consists of three monumental woodblock prints made in collaboration with artist Elyse Pignolet and Mullowney Printing in San Francisco. The left and right panels measure three-feet high by seventeen-feet long, with a central panel at four feet by six feet. Together, they span nearly forty feet. The series depicts a fictional parade of figures from American history whose influence significantly shaped their times, for better or worse. Instead of including well-known historical figures like Abraham Lincoln, Martin Luther King, Jr., or John F. Kennedy, the majority of processional participants are lesser-known figures on opposing sides of the political spectrum. Progressives from American history march to the right on one panel, and conservatives march toward the left in another, heading toward confrontation in the central panel. There, a triumphal arch stands in ruins, among scattered debris of Americana, including a police car, the Statue of Liberty’s torch, pieces of the “Hollywood” sign, an electric chair, a noose, a rural home, and an old tire, with a helicopter and blimp hanging over a power plant spewing smoke. Spanning our nation’s history from colonization to present day, the prints present an alternate framing of history that suggest how we arrived at this moment.