Secular Icons in an Age of Moral Uncertainty 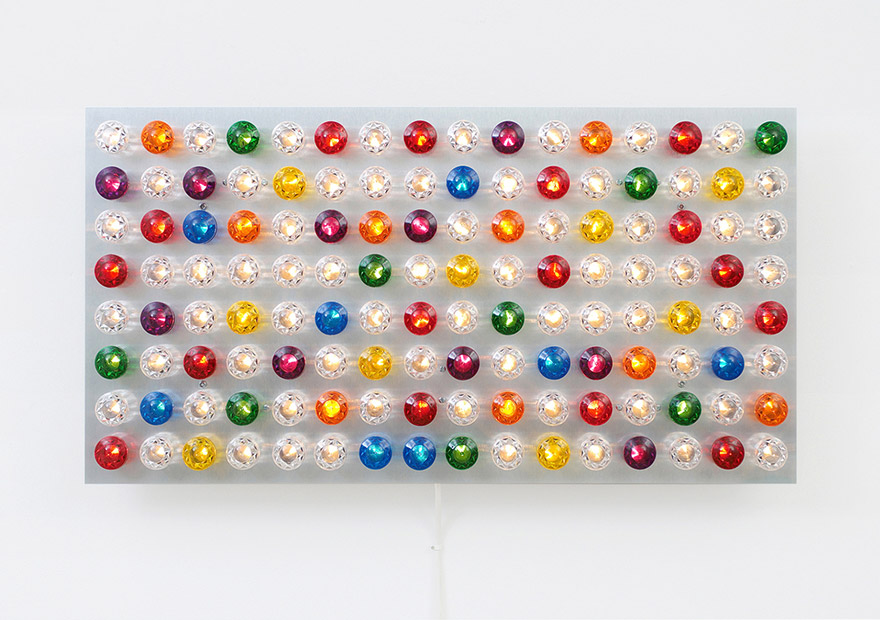 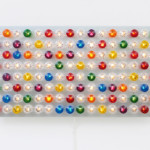 At a time when the notion of belief is particularly fraught, “Secular Icons in an Age of Moral Uncertainty” examines contemporary takes on some of the objects we turn to for meaning or solace. Pictures, screens, movies, and commodities are filtered here through formally abstract conceptual propositions, linked by a sense of indeterminacy. Taking its title from Nathan Coley’s eponymous grids of fairground lights, the exhibition brings together forms of image-making which – while redolent of an art history spanning from Byzantine icon painting to 20th-century avant-gardes – decidedly engage with the now. Which ‘now’ they specifically address, though, remains open to interpretation: is it the lure of gore, of entertainment, of luxury? The grisly spectacle of terrorism or the untapped riches of technological obsolescence? More than the objects themselves, what’s under scrutiny in “Secular Icons” is the act of looking, the dynamics driving our gaze, and the multitude of projections a collection of pieces so radically distinct encourages.

Nathan Coley is perhaps best known for his large-scale illuminated text pieces, such as “There Will Be No Miracles Here” (2006), which often challenge the human compulsion to belief. Coley’s series “Secular Icon(s) in an Age of Moral Uncertainty” (2007-8) reduces the text pieces’ formal language to its bare-bone sculptural elements: metal structure and fairground lights. What remains are ambiguous light boxes at once minimal and saturated with visual memories of the funfair, as well as of the now-ubiquitous glow of the smartphone screen. Illuminating their viewers, Coley’s “Secular Icons” are simultaneously authoritative and frivolous, awe-inspiring and toy-like. Like most of the works in the exhibition, these pieces articulate a push-and-pull, endlessly unresolved.

If an icon is primarily understood as an object standing for, and allowing access to, another entity – be it religious or cultural – then Indrė Šerpytytė‘s “2 Seconds of Colour” (2015) is among the most icon-like pieces in the exhibition. Her monumental light boxes bring to mind geometric abstraction, but their referent is gruesome. The artist captured the blocks of colour that first come up in any Google Images Search before the pictures are fully loaded. Here the burnt red, deep brown, and opaque black rectangles were triggered by the term ‘Isis Beheading’. They stand in for the desert sand, the sky, as well as the victims and executioners’ bright clothing. The stark emotional detachment of these Mondrianesque compositions is a powerful response to the mechanisms of spectacle increasingly cultivated by extremist groups. Šerpytytė’s pieces forbid any pathos while communicating through their size, and sheer volume, something of the horrors of war and of the folly of any forms of fanaticism. Like all icons, they carve out a space for reflection, connecting us to a reality that cannot be fully comprehended.

Mimosa Echard‘s “Braindead” (2015) also contrasts opposites, namely the tension between its seductive, shimmery veils and the gory images the series is based on (all lifted from Peter Jackson’s 1992 comedy horror movie of the same name). To compose each work, the artist spreads silver acrylic paint on one of the film’s ketchup-red stills. She then covers it with a thin piece of fabric and lets it harden. When the photograph is torn away, some of its pigments remain embedded in the paint. Echard embraces the disturbingly entertaining power of broken skin and gushing blood. She stages smooth body surfaces and glistening innards – outside, inside – eliciting the uncomfortable site that connects the two, the wound. “Braindead” also tackles the painting medium itself, inevitably loaded with the legacy of movements such as Supports/Surfaces and Abstract Expressionism. Echard’s painting is equally physical and process-based, at times almost performative. But ultimately it’s the piece, not the gesture, that the artist offers for contemplation. She pins it to the wall, like a relic, or a hide stretched out to dry.

The skin has been cured for some time in Simon Fujiwara’s “Fabulous Beasts” series (2015-16). Luxurious second-hand fur coats have been shaved to expose the intricate sewing patterns constructing the garments. The leather reveals dozens, sometimes hundreds, of tiny fragments, hinting at the number of animals killed for each jacket. Mounted on stretchers like canvases, Fujiwara’s works also summon up a traditional painting language. Yet, although formally suggesting a form of abstraction, the “Fabulous Beasts” are readymade compositions that never cease to refer back to the world. Their seams chart paths in uncanny landscapes, mapping intricate links between comfort, vanity, desire, and death.

Like Fujiwara’s “Beasts”, Sara Naim‘s “Reactions” (2016-7) have terrain-like qualities. As with Echard’s “Braindead”, they conjure up skins, inside and outside, but here the artist grapples with the materiality of the image itself. The Reactions capture the chemicals sandwiched between the positive and negative sheets of an expired Polaroid film. Naim dissects the film’s membranes, scans them, and blows choice details up. She relentlessly tests the possibilities of the photographic medium, and the many ways it can exist in two- and three-dimensional spaces. In her hands, damaged film isn’t the end of an image, but the beginning of its reinvention: from photography to sculpture. The results are beguiling polyptychs, whose commanding presence echoes the altarpiece’s.