Vera Iliatova – Nothing is True and Everything is Possible

Home Events Vera Iliatova – Nothing is True and Everything is Possible
likeyou, February 20, 2020February 13, 2020, Exhibitions, 0 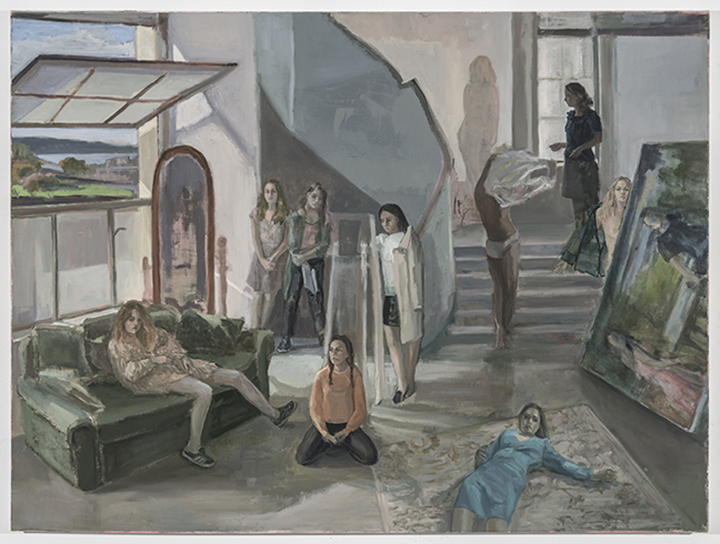 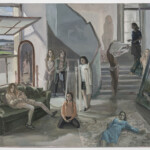 “Whenever I ask my Russian bosses, the older TV producers and media types who run the system, what it was like growing up in the late Soviet Union, whether they believed in the Communist ideology that surrounded them, they always laugh at me.
“Don’t be silly,” most answer.
“But you sang the songs? Were good members of the Komsomol?”
“Of course we did, and we felt good when we sang them. And then straight after we would listen to ‘Deep Purple’ and the BBC.”
“So you were dissidents? You believed in finishing the USSR?”
“No. It’s not like that. You just speak several languages at the same time, all the time. There’s like several ‘you’s.”
(Nothing is True and Everything is Possible (2014), Peter Pomerantsev)

Speaking several languages at once is exactly what is happening in the paintings of Vera Iliatova. “Nothing is True and Everything is Possible” is the title taken from the book by Peter Pomerantsey. The book investigates how the Russian state-controled media uses images to construct utopian narratives that in turn infiltrate power to all levels of the post-perestroika society. Iliatova, having grown up in the Soviet Union until 1991, defecting to south Brooklyn, and eventually winding up in Silicon Valley for High School, is no stranger to this lingua franca.

The new paintings on view stem from an amalgamation of Soviet Social Realism, Art History, and American Pop imagery. What you end up experiencing in her paintings is the decades of exploration of mixing high and low. Archives of stills from American television series and Soviet coming-of-age films are used to compose paintings where the narrative and stylistic integrity is always on the verge of collapsing.

There exists in Iliatova’s paintings a feeling of blank Irony: to “get it” requires that you act like you don’t. This is apparent in the poses, placement, and gestures of the depicted figures as well as in stylistic manner of the paintings. The historical precedent of Antoine Watteau is being skin grafted on top of a Cindy Sherman-esque studio approach. To compose these narratives, Iliatova often dresses up and re-enacts the scenes depicted in the paintings in front of the mirror.

The level of finish and the overall subdued color is deployed to transform the psychology of the uncomfortable terrain. The paintings are realized with the need of antidepressants in a society that has no Prozac. The figures traverse the interior landscapes searching for an idea of the self. But instead they find a reversed funhouse mirror; synthesizing the weight of art history with the levity of Netflix. The simultaneity of the interior and exterior (both literally and figuratively), leaves you questioning what it means to make a narrative painting today and the burden to find meaning in the miasma of a splintered culture.

Vera Iliatova (b. 1975, St. Petersburg, Russia) received a MFA in Painting/Printmaking from Yale University, CT and a BA from Brandeis University, MA. She has also undergone studies at Sorbonne University, Paris, France and completed a residency at Skowhegan School of Art, ME. Iliatova recently exhibited her work at the Katonah Museum of Art, NY in “LandsEcape: New Visions of the Landscape from the Early 20th and 21st Century”. Other recent group exhibitions include the Contemporary Jewish Museum, San Francisco, CA; Nancy Littlejohn Fine Art, Houston, TX; and Tibor De Nagy, NY. Iliatova was included in a two-person exhibition at Monya Rowe Gallery, NY in 2019 with Heidi Hahn. Her work has been reviewed in The New York Times, Artforum, Art in America, and many others. Iliatova lives and works in Brooklyn, NY.