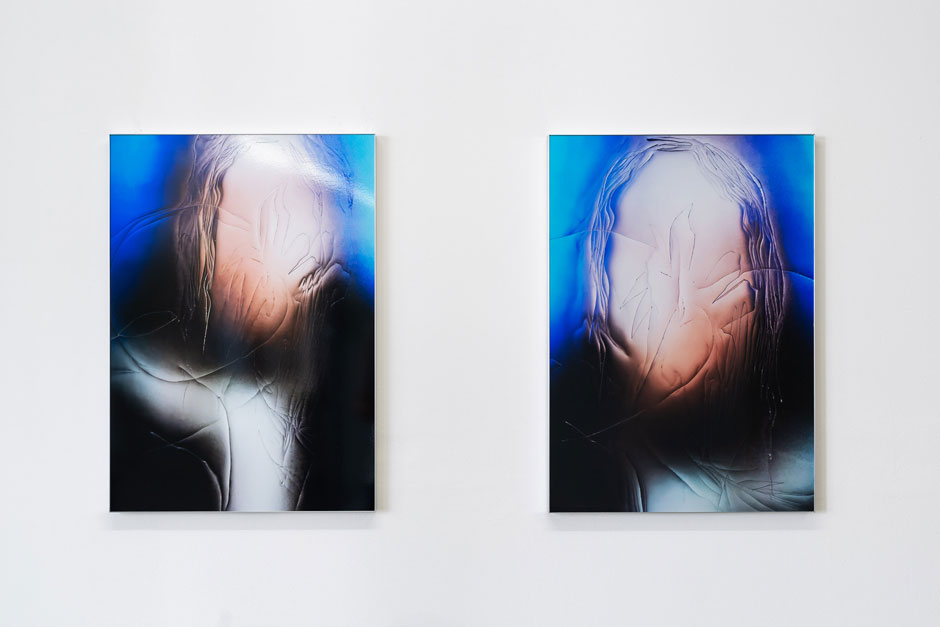 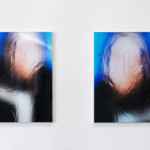 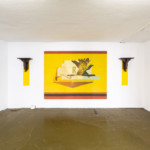 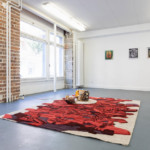 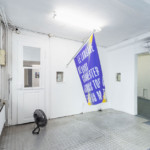 Last Tango is pleased to announce its grand re-opening in new buildings at Gasometerstrasse 30/32 in Zurich. For its first exhibition Last Tango is steering away from its usual program of two-person exhibitions and is presenting a multi-generational group show including works by Swiss and international artists. With a total of six separate spaces, each space contains paired works by two artists.

Fluid in its approach the exhibition “Double Take” features thematic juxtapositions, continuities and ruptures with many works pertaining to the potential of the misidentified, misheard and the ambiguous space of the inexpressible. The exhibition explores subjects such as the limitations of language, the act of muting, subjectivity, immateriality, montage and hybridity, the process of sedimentation as well as historical memory. The show’s title makes reference to the undecipherable at first glance. A double take is a moment oftentimes depicted in films or in cartoons when a character glances at something without much reaction, turns away, and then, in a moment of realization, snaps their head around with a big expression, usually comically goggle-eyed. Diverse in media, the exhibition spans many practices including painting, sculpture, installation, photography, lithography, video and performance.

After five months of renovation the former garage, bicycle workshop and illegal club has been made exhibition ready. Curators Linda Jensen and Arianna Gellini will develop an exhibition programme of one year and a half until the fixed leasehold ends.

The works by Jason Dodge (b. 1969, Newton, Pennsylvania) and Bruno Jakob (b. 1954, Jegensdorf) present two approaches to the non-object. Jakob’s invisible paintings challenge the common premise that seeing is believing, as does Dodge’s sculpture whose title “Aquamarine” inside of an owl suggests that gems are contained in the body of a taxidermy owl. Their works involve imperceptible stages of handling, with on the one hand, Dodge’s owl in which we are led to believe that during the embalming process precious stones were inserted. On the other hand, Jakob’s paintings are “invisible” in that his medium is water, be it Zurich snow water or steam, as well as elements of a more abstract nature such as energies and thoughts. Both bodies of works rely on the symbolic and imaginative power of the chosen materials and actions, potentially engendering a nuanced way of seeing, one that prioritises story making and imagination.

The corresponding works by Per Kirkeby (b. 1938-2018, Copenhagen) and Katja Schenker (b. 1968, St. Gallen) relate to the accumulation of structure, visible in fragmented ways as geological layers. The gouache by Kirkeby with its fleeting quick brush strokes is in stark contrast to Katja Schenker’s time-intensive sculpture originally part of a performative process.

A documentary captures Kirkeby’s approach to painting and the necessary visible and invisible transitions that take place. We come to understand his interest in observation and “insight as opposed to sight” as well as his mistrust in that which is aesthetically pleasing. What comes to the fore is also a desire for a layered interpretation: what seems to be abstracted multi-tiered formations possibly relate to something else (religious subjects, iconoclasm…)

Akin to Kirkeby’s interest in superimposition, Schenker’s art practice has been developing as a combination of performance and sculpture. Her intensive examination of materials – be it the physical possibilities of one’s own body together with in/organic materials such as paper, stone, concrete, wood and dirt – has often seen the artist physically manipulating a material up to the point of her personal breaking point. With a strong sense of perseverance and endurance her employed actions always reach the inevitable conclusion of a structural modification, where materials merge and consolidate. This is the case of “Wie Tief ist die Zeit?” (2017) an eleven-meter-high monolith made of concrete, stone, metal and wood which was realized on the construction site of the new building of the University of Applied Sciences Northwestern Switzerland in Muttenz. Developed over the course of three years, each of the materials used were carefully collected and selected from different regions of Switzerland and then layered one by one creating an almost inner nougat-like pattern. At Last Tango we present one of the side cuts, a beautiful organic ensemble of both natural and man-made materials.

Manon Wertenbroek (b.1991, Lausanne) and the artist duo Chérif Defraoui (b. 1932-1994, Geneva) & Silvie Defraoui (b. 1935, St. Gallen) use experimental methods in photography and video (through reflection or superimposition) and have been working intuitively with traditional subjects of still-life and portraiture wherein the narratives relate to complex and ambiguous emotional states and to personal experience. Engraved onto PVC mirror, Wertenbroek’s subjects, be they still lives or figures, are carved and appear blurrily rendered, yet at the same time also carefully detailed (such as with the continuous outlines of hair strands). Prior to photographing the image Wertenbroek uses the glow of the computer as her light source and in photographing the metallic mirror surface she ‘freezes’, flattens and captures the otherwise fluid and refractive surface. What otherwise would be an intimate bust portrait comes across distanced due to the lack of facial details, making for the persona to be conjured by the onlooker.

Having worked extensively with slide projections and Super 8 video Silvie and Chérif Defraoui led the path for experimental video art in Switzerland in the 1970s and 80s. Defraoui’s work “Lugar/Llano” (1987) is part of their “Bilderstreit” series wherein the title references the Iconoclastic controversy of the Byzantine period and its strife over the use of religious icons. An image of an eagle souvenir object has been blown up and aligned with the shelves suggesting a dialectical tension between sculpture and image. Cultural differences in seeing is explored in their work, underlining the latent visual, subjective, complex, narrative and associative power of images. This oftentimes comes across in dualities: the ornamental geometry vs. the figurative, the traditional vs. the fictional, image vs. reality, image vs. text, sculpture vs. photography. This is the first time the work is being shown since 1987 where it was on view at Kunsthalle St. Gallen.

The works by Vittorio Santoro (b. 1962, Zurich) and Simon Starling (b. 1967, Epsom, UK) both directly address issues of the storage and dissemination of information, as well as historical memory. Santoro’s large scale photographic work “Pulleys” (2016) alludes to the metaphorical subtext of the pulley in which mediatisation and politics are seen as a combination of push and pull forces, usually of a strategic nature. Santoro here is “questioning which dynamics, forces and movements traverse the world situation, especially those which appear non-obvious or unknown.” (1) On closer inspection one discovers that the pulleys are arranged in a nonsensical system that ultimately would not function. What could this tell us about the transfer of power?

A flag by Santoro reads “Language Will Never Quite Connect You to The World” in both French and English. Part poetic expression, part semantic experiment, the aphoristic phrase pronounces the overwhelming truth on the limits of communication, namely that experience is sometimes very difficult to make intelligible and understood to the Other. The phrase also possibly hints at the potential of one’s own idiosyncrasy and personal notions of the world. The flag is one of ten flags originally exhibited at the Prix Marcel Duchamp exhibition at the Centre Pompidou in 2017.

The series of lithographs “Archaeopteryx Lithographica” (2008) by Simon Starling has an intriguing elaborate back story of a two-way discovery. Pictured within is the single feather of a Jurasic fossil first discovered in 1861 in limestone deposits near Solnhofen, Germany. The name of the feathered dinosaur Archaeopteryx Lithographica in Greek means ancient wing from the printing stone. Limestone quarries were being used because of the popularity of the lithography printing technique. In the form of mise en abyme (a lithography of the lithographic printing stone) this work relates to the interrelatedness of things: of how the invention of lithography was to help validate Darwin’s theories of evolution, namely of species as being transitional (in this case half-bird, half-dinosaur).

Samson Young and Gregory Hari‘s contrastive works both rely on observing and listening. Be it the detailed recollections of family rituals or the negation of the melodic component of a performance, these multi-media works convey a distinct tone of stillness. In Samson Young’s Cageian video “Muted Situation #2: Muted Lion Dance” (2014) the artist has purposefully muted the music in a traditional Chinese lion dance performance, bringing to the fore soundscapes that are usually not heard such as the breathing and moving bodies of the dancers. It is not a non-appearance but rather what music composer and artist Young (b. 1979, Hong Kong) calls a “conscious suppression of dominant voices, as a way to uncover the unheard and the marginalized, or to make apparent certain assumptions about hearing and sounding.” (2)

Gregory Hari (b. 1993, Richterswil) has recently been exploring personal anecdotes and in doing so has been reflecting upon how family stories and common, even banal, fabrications of everyday occurrences influence our perception and cultural values. In a new performance “In these heights, I was born” and a series of photographs he harks back to the place where he was conceived, the Alpine region of Wallis. Presented downstairs are various photographs, one of which depicts curtains, a symbol of unveiling and private concealment, taken in a hotel located close to their vacation house. Another is of a rock protection net, alluding to the family net and the tale of his family who exploded rocks in order to free space to make a lawn.

In the gallery facing directly onto the street Christoph Hefti (b. 1967, Lausanne) and Michael Etzensperger (b. 1982, Winterthur) present transcultural representations of masks and figures. For his series “Masken” (2014) Michael Etzensperger has collected images from some 44 source books ranging to literature on African masks, to Swiss masks to Greenlandic masks. The artist’s focus is on the image, the photographic representation, and not on the object life of the mask. The superimposing of two masks makes for a surreal effect, but is also a decision to create a dialogic relationship. Etzensperger was originally inspired by André Malraux’s “Musée Imaginaire” (The Imaginary Museum) and the potential comparative interchange between photographic reproductions, be it in a physical space or in the mind.

Christoph Hefti’s initial sketch for “Bats Falling” (2017) rug came about from a research trip to Columbia whereupon he visited the Museum of Gold in Bogota in Columbia which holds one of the most important collections of pre-Hispanic gold figurines. The swarm of flying bats depicted in the carpet have been given the facial traits of these museum artefacts made by indigenous cultures and are reminiscent of the natural phenomena of bats gathering in the thousands to leave the cave to go out to hunt. A multi-part grotesque ceramic head-like and claw structure lies on the full-moon pictured in the hand-knotted Nepalese carpet.