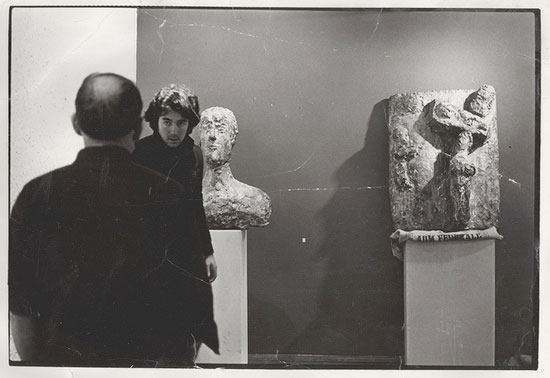 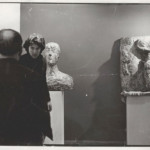 Hauser & Wirth Somerset is pleased to present an exhibition of works by the late Swiss sculptor Josephsohn (1920 – 2012) alongside the architectural drawings of his long-time friend, Swiss architect Peter Märkli (born 1953). Taking its name from ‘La Congiunta’, an isolated museum designed by Märkli to house a number of Josephsohn’s bronze sculptures, the exhibition, curated by Niall Hobhouse, examines the intense and longstanding collaboration between these two powerful creative minds, exploring what two very different disciplines – sculpture and architecture – can offer the other as insight, and about the generosity and humanity of such an exchange. The exhibition brings together a selection of Josephsohn’s sculptures produced throughout his 60 year-long artistic career, as well as some of the artist’s works on paper, alongside a series of drawings by Peter Märkli. The material includes both artists’ early efforts to find distinctive creative voices.

The two men met in Zurich in 1975 when Märkli was studying at the ETH. The young architect happened upon the work of Josephsohn in a newspaper and arranged to visit his studio. As a student Märkli had been feeling constrained by the doctrine of classical modernism and was missing a ‘language of architecture’, he discovered in Josephsohn’s work a way of escaping the weakness of formal expression in the architecture of his contemporaries. Märkli recognised a link between the idiomatic expression he was seeking in his own architecture and Josephsohn’s very precise sculptural language. A long-standing friendship and mutual admiration was formed. Both men, in particular Josephsohn, eschewed the ‘teacher / pupil’ stereotype with which many labelled them, however it is clear that Märkli found in Josephsohn a cultural attitude which helped him develop his own architectural language. He frequently includes sculptures and above all reliefs by Josephsohn in his buildings. Likewise, Josephsohn came to rely on Märkli as an advisor; the architect became involved in constructing frameworks for his sculptures, organising an archive of the drawings, advising on which works to select for bronze castings or exhibitions, and assisting on the installation of works.

Entering the Threshing Barn at Hauser & Wirth Somerset the viewer encounters three of Josephsohn’s half figure sculptures on plinths. These imposing beings appear as vast boulder-like forms, evoking ancient standing stones, yet they are inspired by living people. With all of his half figure sculptures, Josephsohn worked with live models. These abstractions, although not strictly portraits, demonstrate Josephsohn’s practice of working from life, seeking to capture the presence and distinctiveness of the individual. Whilst the surfaces of his brass sculptures are rich with detail, Josephsohn’s primary concern was the balance of mass and volume – the bulk and weight of his sculptures are an essential part of their character.

The exhibition includes a series of Josephsohn’s reliefs, a sculptural form that played a central role throughout his artistic practice and that illustrates his life-long interest in architecture. In reliefs, the artist could explore the relationship of the body within the constraints of the limited space, which often incorporated architectural elements such as in ‘Untitled’ (1965 /1975), hanging on the wall of the Threshing Barn. Josephsohn’s reliefs, in contrast to his freestanding sculpture, were never created using a live model, but as expressions from the artist’s imagination, often accompanied by a drawing or sketch. In the Workshop Gallery, a selection of these drawings highlight the artist’s architectonic approach to his sculpture, ranging from simplified sketches to complex configurations of dense forms, analysing the human figure and its relationship to the space it inhabits.

The relentlessness of Josephsohn’s practice, which continuously explored the same sculptural issues of proportion, volume, and mass, can be related to the serial work on specific architectural questions found in Märkli’s drawings, which he often creates in large numbers independent of his concrete projects. Using mostly A4 paper and pen or pencil (often coloured) Märkli’s drawings show how he developed an architectural language entirely his own. The works hanging in the Workshop and Pigsty galleries have an immediacy and spontaneity, inspired by Josephsohn, whose oeuvre has given Märkli the insight to approach architecture as art. The drawings, many of which incorporate Josephsohn’s sculptures and reliefs, have a child-like simplicity yet are deeply thoughtful, with the ability to reveal Märkli’s vision. A sense of depth is drawn with a few pencil lines on paper. The use of colour in his drawings emphasises an expressive quality; they are far removed from the cool modernist style of the architecture of his contemporaries.

The drawings, which are a vital part of Märkli’s creative process, can be seen independently or together as a series; an idea or the development of ideas. Never directly addressing a building commission, they instead record a collection of forms, a catalogue from which Märkli can draw elements according to the buildings he is designing. Despite their minimal nature, the drawings still demonstrate that he is considering relationships with architecture; these may be with the landscape, such as water or mountains, or with art such as sculpture, in addition with the surface or in this case the ground; which is often depicted with curved, rather than the expected straight lines.

Running the length of the Pigsty gallery are two of Josephsohn’s reclining figures ‘Untitled’ (1969) and ‘Untitled’ (1971). These works often resemble landscapes and bring to mind rolling hills and geometric formations. Josephsohn always conceived his sculptures to be viewed within the context of architectural spaces and to this end, Märkli designed and built ‘La Congiunta’ in 1992 to house a selection of Josephsohn’s works. Märkli’s sketchbooks which reveal his early designs for ‘La Congiunta’ are displayed in a vitrine at the end of the exhibition. This remarkable building, completely unstaffed and with no facilities or electricity, encapsulates the dialogue between art and architecture: the surface of the concrete of the walls, the distribution of the natural light, the proportion of the spaces, the position of the ceilings, location of the building, all allow the viewer to consider the sculptures. The name ‘La Congiunta’ celebrates the ways in which both Märkli’s and Josephsohn’s work is read as a reflection on the other, and their individual concerns are emphasised in this context.

Alongside the exhibition, Hauser & Wirth Somerset’s Book & Printed Matter Lab will provide the space to explore ‘La Congiunta’. Visitors will be able to view Peter Märkli’s sketches, explore printed material related to the project, and watch both the artist and architect talk about their work. The lab is a space for the development of dialogues, activities and events relating to the unique relationships between artists and architects. It will take place in the Implement Shed – Hauser & Wirth Somerset’s dedicated learning room.